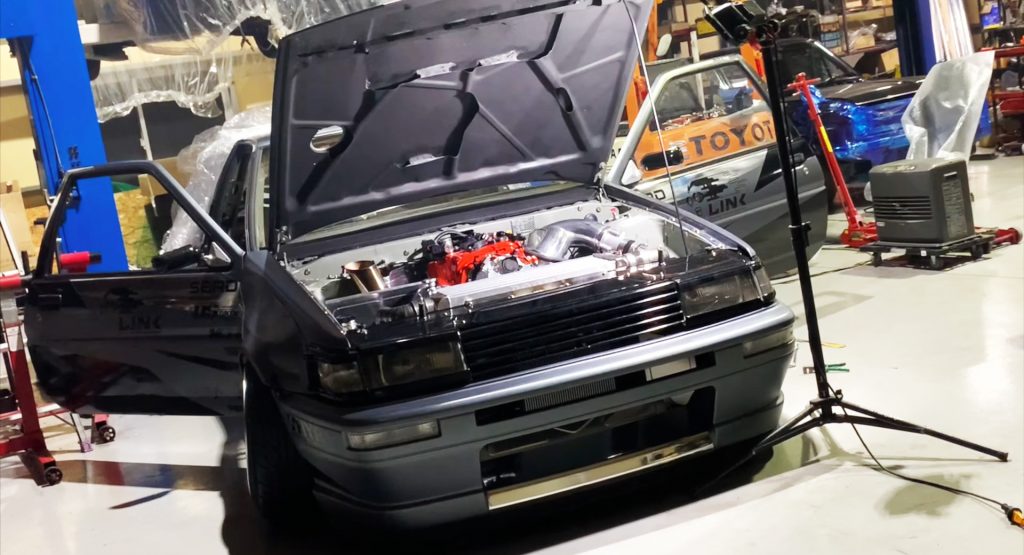 A Japanese tuning house has already taken the engine from a GR Yaris and dropped it into an AE86, creating an epic drift machine with insane attention to detail.

Daddy Motor Works opened in 2013 and has since been a hub for the customization of hard-to-find vehicles. Owned by Kunihiro Oto, the latest project is a drift machine powered by the engine from the new GR Yaris.

The recipient of the motor is a 1980s AE86 Levin hatchback, a close sibling to the AE86 “Trueno” that every Initial D fan goes crazy over. The Yaris’ G19 engine produces 257 hp from its 1.6-liter turbocharged 3-cylinder, but you can bet that Oto has upped that number by adding more boost.

Power is sent to the rear wheels via a 6-speed manual transmission sourced from a Toyota GT86. Oto built a custom adapter plate to make the G19 engine fit a Nissan L-series bell housing, which was then adapted to the transmission.

To make the engine fit, the steering rack had to be moved forward, which required a custom set of spindles to be made. The engine looks tiny in the engine bay of the AE86, even though the car itself isn’t very big. In lieu of a full exhaust system, a pipe goes straight through the hood

Read More: This AE86 Toyota Corolla Levin Is Getting A GR Yaris Engine Transplant Under Its Hood

The interior is also fully caged for safety and added stiffness. It’s finished in an exclusive matte gray color from the Toyota Supra, and the sticker scheme is a reference to the GR Supra race car, with black and chrome stripes extending backward from the headlights.

Although the vehicle looks very professionally finished, a lot of the pieces are cheap parts that were made to fit with the body of the AE86, such as the side mirrors, fender flares, and even the rear axle – which comes from a Toyota Crown.

The front brakes are sourced from an R32 Skyline GT-R and feature 300mm rotors for good stopping power. Custom brackets had to be made for the brakes to be installed on the AE86 body. A set of “Chevlon” 6 spoke wheels complete the look, in staggered sizes of 16×9 in the front and 16×10 in the rear.

Daddy Motor Works is building two AE86 drift cars currently, and owner Oto says that one will be used for practice, while the G19-powered model will be used for competition. Oto also explains that he would like to try drag racing the gray AE86, and has specifically installed a launch control feature.