Every major automaker in the world is moving towards an electrified future and so is the case with the iconic American SUV manufacturer Jeep. Stellantis Group which is Jeep’s parent company recently revealed its business plans for coming years during a presentation in Amsterdam, and in the same presentation, the company also revealed its aspiring plans for the electrification of the Jeep brand. The corporate conglomerate comprised of brands like Chrysler, Dodge, Jeep, Maserati, and Fiat along with 10 other brands unveiled Jeep’s first all-electric crossover. According to the announcement, the electrified Jeep will be making its debut in the first half of 2023. 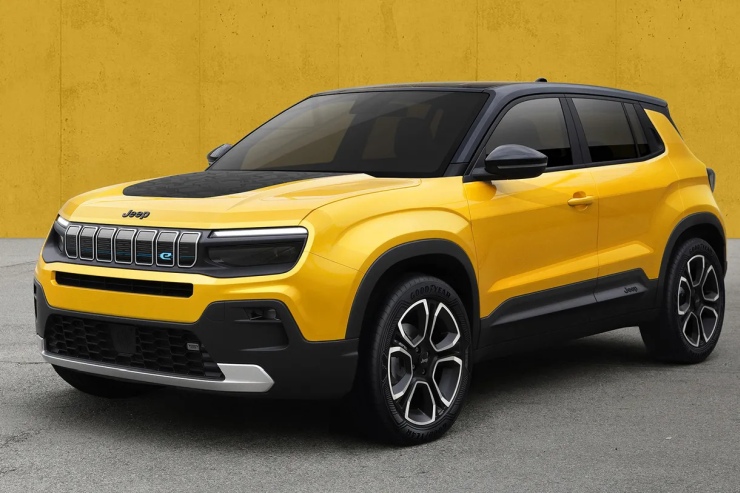 As of yet, Stellantis or Jeep have not revealed the name of this upcoming crossover but they have announced that the EV crossover will be first launched in Europe. The companies have further refrained from providing any information on price, battery, motor, range or features for the model but what we have gotten are two pictures of the forthcoming EV.

The first all-electric Jeep in terms of design features a familiar boxy look with the customary seven slated grille on the front. However because of the model being an EV, the slats have now been closed off for better aerodynamics, we have also seen this closed-off grille in the new Jeep compass. Apart from the grille the front fascia of the vehicle features a set of LED headlamps and LED DRLs which are followed down by a rather aggressive front bumper design. The lower section of the bumper boasts a honey-mesh like grille along with a silver skid plate. We can also see a bulged up hood with accented black paint along with what appears to be an EV specific badge on the grille.

Overall the SUV is beautifully proportioned and looks unmistakably like a Jeep. The vehicle features some sculpted body lines on the front and rear fender that add to the muscular stance of the SUV. It also gets large squared-off wheel arches that house the petal-like dual-tone alloy wheels along with thick black cladding on the sides. We can also notice that the rear door handles of the SUV are not placed at the conventional spot. This might have been done to make the new SUV appear as a three-door vehicle. 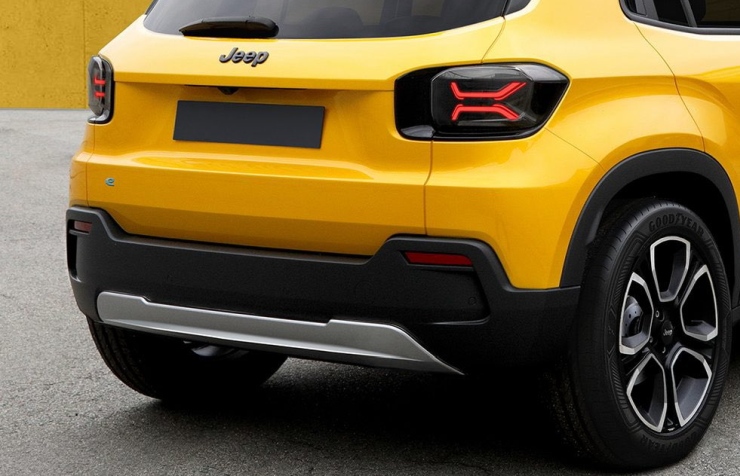 The second picture presents the rear end of the vehicle and we can spot a Cherokee or a Renegade like rear-end design. A set of LED taillamps with an X-like detail, a blue E badge, Jeep insignia, blacked-out rear bumper with a silver skid plate round up the back-end design of the EV Jeep. Other than this as mentioned earlier, no further details have been announced of the upcoming vehicle.

CEO Carlos Tavares stated during Stellantis’ 2021 earnings announcement, where this car was launched, that the automaker plans to have EVs account for 100 percent of its European sales by 2026. Given that Jeep’s first electric vehicle is expected in the first half of 2023, there should be a considerable push toward electrification between now and then. Jeep CEO Christian Meunier also stated that by 2025, Jeep would have an electric vehicle in every sector.