DC2 Design is a popular names in the vehicle customisation circle. When we hear the name DC or DC2, customised interiors of Toyota Innova is probably the first thing that would come to the minds of many. DC2 has been customising interiors for a variety of vehicle. In fact not just interiors, they also offer exterior body kits for cars as well. Kia Carnival MPV is currently south Korean car manufacturers flagship model in the Indian market and it is a very spacious MPV. Here we have a Kia Carnival with a DC2 designed cabin that looks extremely luxurious.

The video has been shared by dc2design on their Instagram page. The short video shows all the customisations that are done to the Kia Carnival. Starting with the exterior, it looks like the whole car was repainted. Kia Carnival is available in three shades in India. The Carnival seen here in the vidoe gets an Indigo shade which looks good on it. Kia Carnival comes with electrically opening sliding doors. A retracting footstep has been installed on the car that comes out whenever the doors are opened. A bit of body skirting can be seen on the car to give it a muscular look.

Just like other customisations from DC2, second and third row seats have been completely removed and replaced with an set of recliners. The recliners can be adjusted electrically and the controls for the adjustments are placed on the armrest. Kia Carnival is an extremely spacious MPV and that has worked in favour of DC2 while designing the cabin. They have used extremely light colour for the interiors which makes it look even more spacious. The flooring has also be redone. There are large LED lights panels installed on the roof which makes the cabin look airy. Roof has also been customised and it comes with ambient lights, reading lamps, roof mounted AC vents. 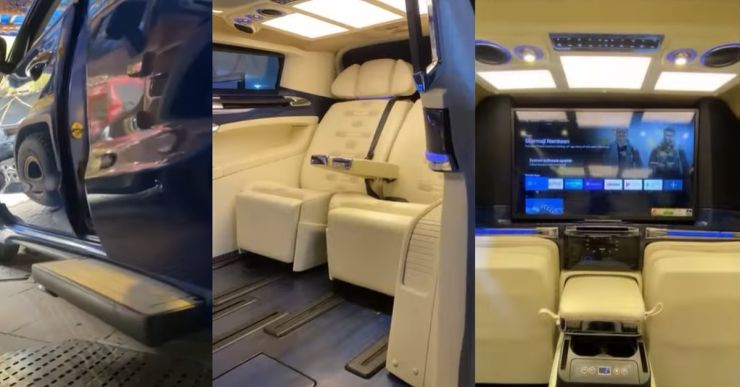 Opposite to the recliners, there are two more seats are folded and this can also be unfolded electrically. A panel can be seen between the seat which is probably a refrigerator unit. The driver and the passenger cabin has been divided using a glass partition.  A large LED screen is installed on the car and partition and it can be folded up when not in use revealing the glass wall. All the windows have curtains that are electrically controlled.

Overall, the car looks extremely good with all the customisation options and has a luxury car like look. Kia Carnival is a huge MPV which is available with features like touchscreen infotainment system, twin electric sunroof, three-zone climate control, leather seat upholstery, multi-function steering wheel, electrically opening sliding doors and so on. Kia Carnival sold in Indian market is not the latest generation. International markets have received a new generation Carnival. Kia Carnival in India is only available with a 2.2 litre turbo diesel engine. It generates 200 Ps and 440 Nm of peak torque. The engine is mated to an 8-speed automatic transmission as standard. Price for Kia Carnival starts at Rs 24.95 lakh, ex-showroom and goes up to Rs 33.99 lakh, ex-showroom.