Deliveries for Sant’Agata’s £2m, 803bhp hybrid supercar will begin in the coming months

The recently revived Lamborghini Countach LPI 800-4 has been driven on public roads for the first time ahead of deliveries starting in the coming months.

Its dynamic debut follows a reveal last year at The Quail, A Motorsport Gathering as part of the annual Monterey Car Week festival in California, as Lamborghini marked 50 years since the original Countach made its debut at the Geneva motor show.

Just 112 examples will be produced, priced from €2 million (£1.7m) before taxes, and the majority are said to be spoken for already. 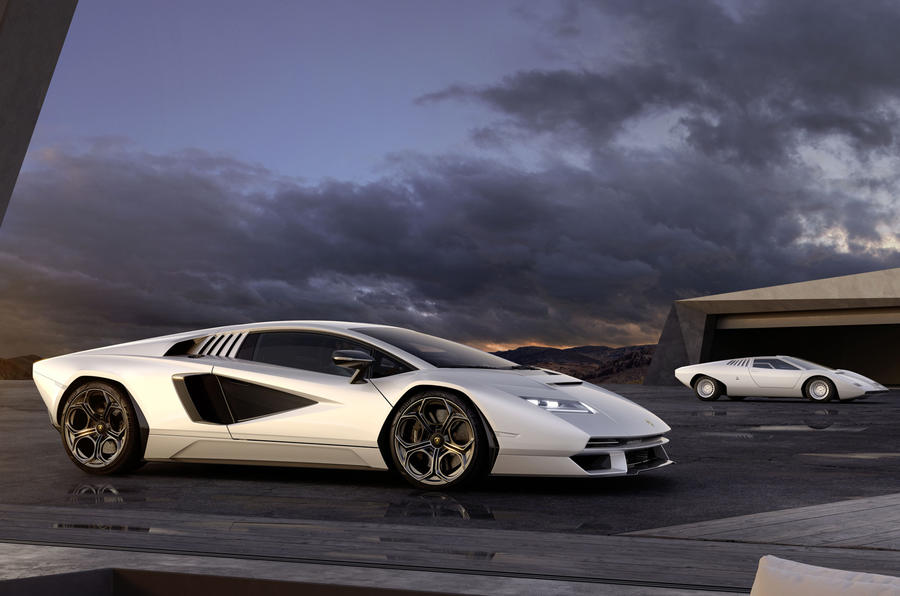 Like its namesake, the new Countach is powered by a naturally aspirated, longitudinally rear-mounted (longitudinale posteriorie, hence LP in the name) V12 engine, in this case producing the same 769bhp as it does in the non-electrified Aventador Ultimae and driving both axles through a seven-speed automatic gearbox.

The V12 alone would make the Countach one of Lamborghini’s most powerful road cars, but the integration of a 34bhp, 48V electric motor in the gearbox takes combined output to 803bhp, putting it well clear of the Ultimae and only slightly below the Sián FKP 37. A precise torque figure hasn’t been given, but it can be expected to closely match the Sián’s 531lb ft.

The Countach will sprint from 0-62mph in just 2.8sec – two seconds quicker than the most powerful version of its namesake – and on to 124mph in just 8.6sec. Top speed is pegged at 221mph.

The electric motor is powered by a supercapacitor unit, which is said to produce three times more power than a conventional lithium ion battery of the same weight. However, this will be the last time Lamborghini employs this technology in a production car, with replacements for the Aventador, Huracán and Urus lined up to receive more conventionally hybridised powertrains with the capacity for significantly reduced emissions and engine-off running, which a supercapacitor cannot achieve.

It’s the “only mild-hybrid technology to create a direct connection between electric motor and wheels”, according to Lamborghini, and is used to smooth out the acceleration curve, provide a subtle power boost at the driver’s discretion and motive assistance in low-speed manoeuvres.

While the underpinnings are an evolution of those used by the Aventador and the Sián, the design is all new and based heavily on the defining features of the original Countach, which Lamborghini describes as “the poster car of the 1980s and a symbol of automotive and lifestyle ultra-cool”. 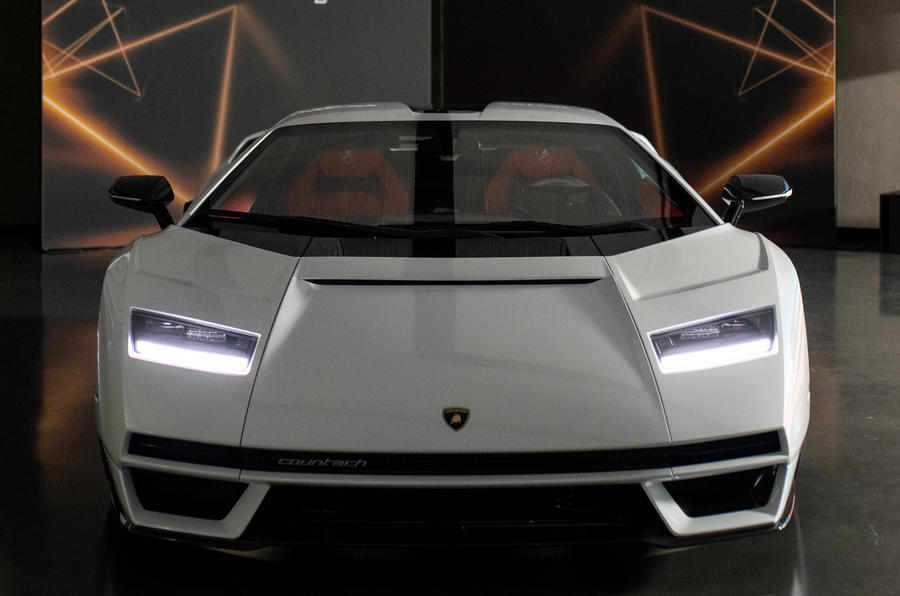 The silhouette takes inspiration from the various Countach models produced during the car’s near 20-year lifecycle, having been subtly reshaped for a more obvious ‘wedge’ shape, with prominent sharp lines and angles highlighted as a characteristic that will be carried over to future Lamborghini models.

The front end is where the most obvious changes have been made, with the Aventador’s aggressive visage making way for a cleaner, less cluttered look with simple, near-rectangular headlights and a clearly defined bonnet. The minimalist theme is carried over to the uninterrupted roofline, with the engine’s air intakes integrated into the car’s rear haunches.

The prominent side air intakes are a nod to those that adorned the original car, which were then used to feed air to a pair of side-mounted radiators in a set-up inspired by Formula 1 cars.

There’s a more subtle historical reference up top: a clearly defined recess running the length of the roof is a nod to the innovative ‘periscopa’ rear-view mirror that was fitted to early Countach models.

Modern touches including ‘movable’ 3D-printed air vents and a photochromatic roof panel that changes from transparent to opaque on command serve as a reminder that the Countach, “despite its historic inspiration, is a future automotive screensaver for the 21st century”. 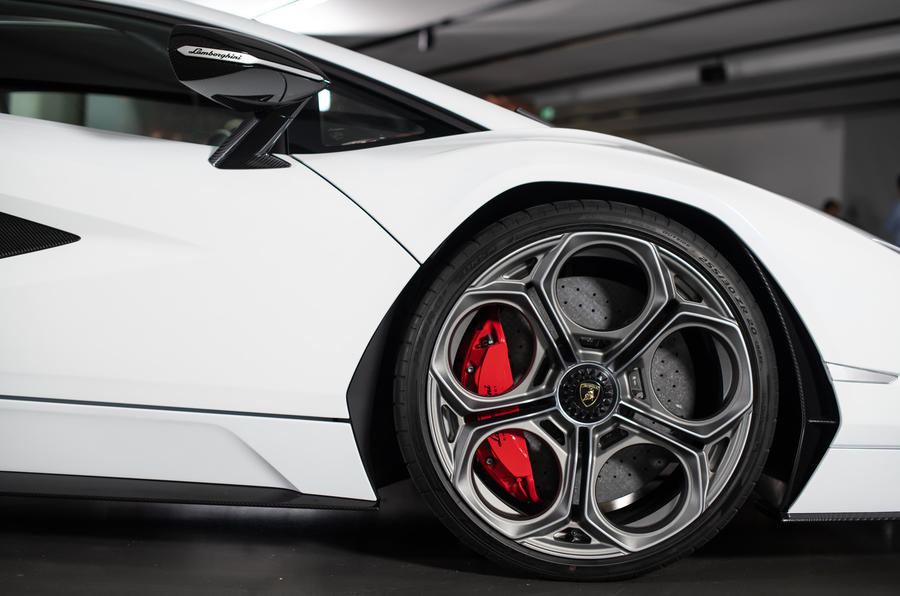 Inside, meanwhile, geometric stitching pays tribute to the angular original car, but the Countach is still closely related to the Aventador, with modern accoutrements including an 8.4in infotainment touchscreen with smartphone mirroring functionality.

Tipping the scales at 1595kg dry, the Countach has a power-to-weight ratio of 503bhp per tonne, thanks largely to the use of carbonfibre for all body elements. The material is left exposed in certain areas, but a range of heritage paint options are available, including the Bianco Siderale seen here, Verde Medio and Bronzo Zante.

Mitja Borkert, the head of Lamborghini’s Centro Stile design division, hailed the original Countach as “one of the most significant and exciting cars in automotive history” and said the Countach LPI 800-4 gave an opportunity to “continue its evolution into a new era”.

He added: “The Countach was provocative and polarising. It made people smile and stare, but its infamous recognisability demonstrates the purity of its design legacy. The Countach LPI 800-4 elevates that clarity to a new level, celebrated in an exclusive limited edition to take its place in motoring history.” 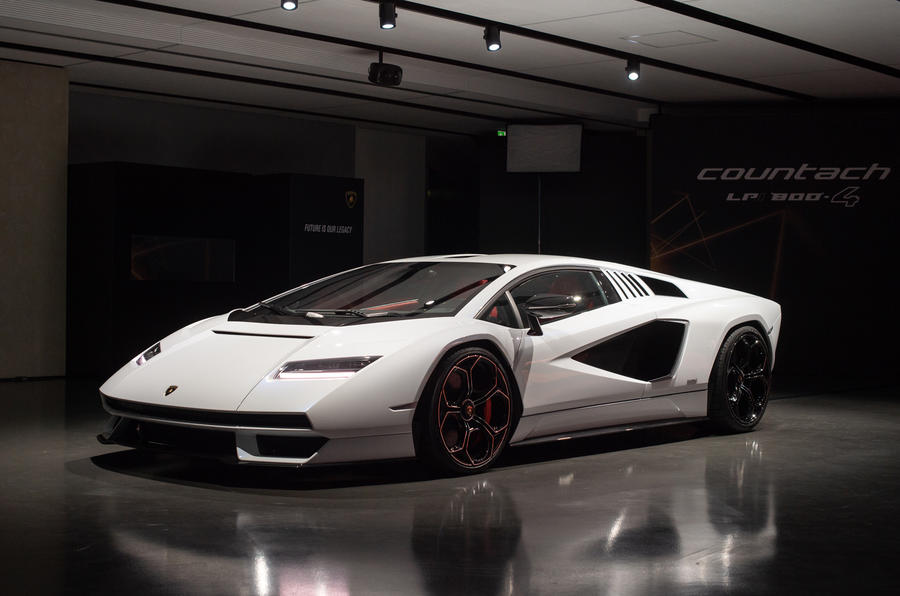 Lamborghini’s revival of a historic name and use of retro design cues comes as something of a surprise, given that CEO Stefan Winkelmann, who is serving his second term at the helm of Lamborghini, has a well-documented aversion to nostalgia, instead favouring an eyes-forward approach to product planning.

Explaining how the Countach project made it off the drawing board, Winkelmann said: “I left the company with the idea that we were never going to make a retro car, never ever. So I came back and said ‘why are we doing this now?’ But when we looked at the car and talked about it, I was happy to do it.”

The Countach, then, is likely to be a one-off, with no other past models earmarked for revival. “I always say we need to look through a big windscreen,” Winkelmann added, “not spend too long glancing at the rear mirrors.”

Lamborghini is on the cusp of a transformative era, with the Aventador’s plug-in hybrid successor due in 2023 and a battery-electric four-seat super-saloon to follow towards the end of the decade. 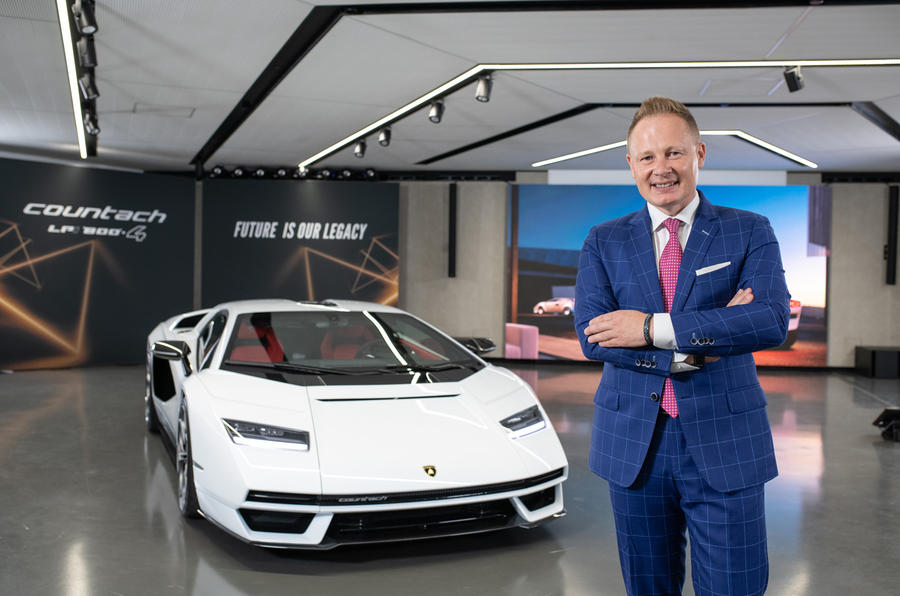 Were you nervous before you showed the design to [original Countach designer] Marcello Gandini?

“Like a young boy! For me, Marcello Gandini is the greatest. I was happy when he liked the car, and he has said that he likes that I’m taking his philosophy into the future – that I’m studying his designs. For me, his style remains the ideal one.”

CEO Stefan Winklemann is on the record as hating retro design, what was his reaction when he returned to Lamborghini to discover the project was underway?

“Let me say that the work began before Stefan Winkelmann, but we have finished the car with Stefan Winkelmann. If he didn’t like it, it wouldn’t have happened… Most of the work was done in the lockdown period, which was a huge complication: I was in Germany, I had designers in Sant’Agata and others in the south of Italy, Korea and the US. There were lots of online meetings and 3D printing.”

How do you pay homage without creating a pastiche?

“I always hear the retro discussion but, in my opinion, if a designer is doing it in a good way, a true modern interpretation, it’s absolutely fine, and the Countach is this. I was in love with the 2005 Ford GT – a car that I’m really lusting for. Then at Porsche, I worked on the 917 Concept and the 904 Living Legend, also the 911 Safari. They were celebrating the past with a modernistic approach. When I went to Lamborghini, I had this idea of doing a Countach, one inspired by the same philosophy of celebrating the past without being trapped in it.

Did you have a picture of the original Countach on your bedroom wall?

“No! I was born in East Germany, so there was no Countach, no Porsches, nothing like that. Seeing a Mazda or a Citroën BX was as exotic as it got. I grew up behind the Iron Curtain; my brother would bring me Hungarian car magazines when he came back from military service, and I would cut out all the pictures and make my own car catalogues. But there was never any Countach. The first Lambo I remember was the LM002.”