Close calls are not uncommon in India. A country where people refuse to be patient on the roads sees some of the closest calls on the roads every day but seldom do they get captured on a camera. Here is an incident that shows a scooter rider beating two life-threatening obstacles within three seconds! Would you call it luck or plain skills?

The incident from the Southern part of the country shows a bus finding a wide enough spot on the road to take a U-turn. As the bus driver sees that there are not many vehicles on the roads, he starts taking the U-turn. A bike rider crosses the bus as it starts taking a turn.

The CCTV footage shows a man on a scooter entering the corner at a very high speed. As the scooter approaches the bus, the driver almost completes the first manoeuvre. That’s when the guy on the scooter swerves to his left and uses whatever narrow space there was between the bus and the wall. Even the bus driver spotted him at the last moment and applied the brake.

The guy on the scooter in the meantime just missed the bus and continued going straight to find a tree. He somehow manages to pass through the gap between the tree and the wall. The video also shows his helmet falling down from the scooter but he was not wearing the helmet. It was kept on the floorboard of the scooter.

The shocked scooter guy managed to avoid two obstacles within three seconds and even did not stop to see what he escaped!

Most accidents happen on blind curves 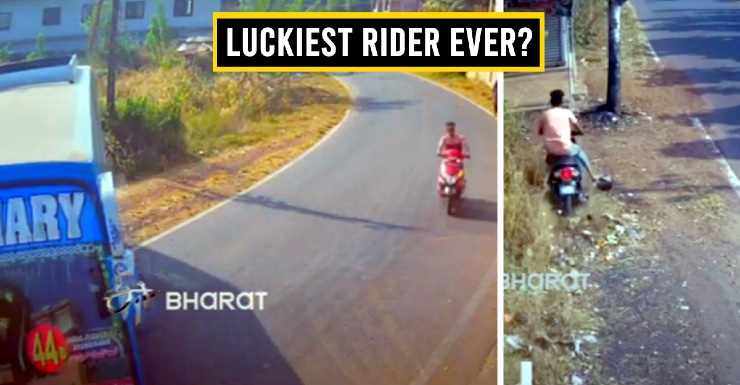 Blind corners, especially on the roads without any dividers can be very dangerous. Most accidents on the mountains happen on blind curves where oncoming vehicles cannot see others. In most cases, the vehicles enter opposite lanes and crash into each other.

That is what it is always important to slow down on blind corners even if you do not get to see any obstacle. Slowing down the blind curves is a good practice and will keep you safe.

One should always stick to the lane on a blind corner. This ensures that the path is clear. Always try to warn the vehicles coming from the opposite by honking on the blind curves. This alerts the driver and reduces the chances of accidents.

Overtaking on the blind curves also leads to accidents. Always make sure that you get a clear view of the road ahead for safe overtaking. Curved roads do not offer that and hence, are very dangerous to overtake other vehicles.

Looking at the video again, what do you think about the guy on the scooter? Simply lucky or it was his skills that saved him?

The post Luckiest guy on a scooter? Escapes from crash twice IN 3 seconds! first appeared on Cartoq.Cartoq Read More