Motorhome culture is something which is still budding in a country like India. State governments and tourism departments of various states have now started taking initiatives to promote motorhome or caravanning for tourism purposes. One of the major SUV maker in India, Mahindra has recently signed an agreement with a research-based, IIT Madras-incubated caravan manufacturing company, Campervan Factory for campers in India. They will be developing a budget friendly luxury camper for buyers in India based on Mahindra Bolero dual cab camper. While we wait for the official camper caravan from Mahindra here we have a video of Bolero Camper caravan which is made by a firm called Motorhome Adventures.

The video has been uploaded by Motorhome Adventures on their YouTube channel. In this video, vlogger talks about all the changes and modifications that are done to the Mahindra Bolero Camper pick-up truck. As part of the conversion, the dual cab design of the pick-up has been retained by the flatbed has been converted into a living space.

Before talking about the features that are offered in this Bolero Camper caravan, vlogger shows minor modification done to the exterior. The steel rims were replaced with 16 inch all terrain tyres  and it also gets features like an air suspension at the rear and market lights on the roof. The home or the area where the bed and other features are included completely rests on the flatbed and the vlogger mentions that if needed, it can be separated from rest of the body easily. 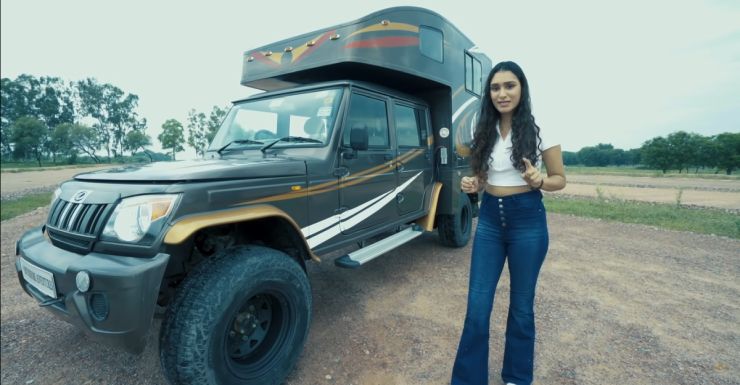 One can enter into the rear cabin using a slide and drop ladder. There is a proper door with lock for the door to ensure safety. Considering the fact that there is not much space available at the rear of the Bolero Camper, Motorhome Adventures have done a great job. There is a bed on top and a couch on the floor which can be converted into a bed if needed.

The shower and sink even has an option to offer normal and hot water. If this was the single cab Bolero pick-up, then they would have had more space to design the cabin neatly. The only drawback of that idea is that only two people can sit in the front cabin. Vlogger admits that designing this caravan was challenging due to space constraints but, overall they have done a great job with it.

There are enough storage spaces on either side of the cabin and a solar panel has also been installed on the roof. The cost of such caravans differ depending up on the features that the customer ask for. The starting price for this Mahindra Bolero Camper pick-up caravan is around Rs 14 lakh.