Mahindra Thar is the first SUV that would come to our mind when we talk about 4x4s in India. The all-new Thar became popular among buyers in a short span of time and there is currently a long waiting period for it. There was direct rival for Mahindra Thar in the segment until last year. Towards the last quarter of 2021, Force decided to launch the Gurkha BS6 in the market. Both these SUVs are currently the 4×4 SUVs that are available in the affordable prices in India. Both SUVs are different in terms of power, engine, looks and performance. Here we have one such video where a Mahindra Thar and a Force Gurkha is seen competing against each other in a drag race.

The video has been uploaded by THE CAR MALL on their YouTube channel. Vlogger starts by talking about what they have planned for the video. In this video, vlogger took both Mahindra Thar and Force Gurkha SUV to a closed road where they plan to conduct a drag race. The vlogger mentions is specifically in the video that they are conducting the race on a closed road and have taken safety precautions.

The race is conducted in three rounds in which the drivers will swap the vehicles after a round. The vlogger does not mention if they are using the petrol or diesel Thar but, as Force Gurkha is available with a diesel engine only, we assume vlogger brought diesel Mahindra Thar. Mahindra Thar is available with manual and automatic transmission options and the one seen here in the video is a manual version. Force only offers manual gearbox with Gurkha. 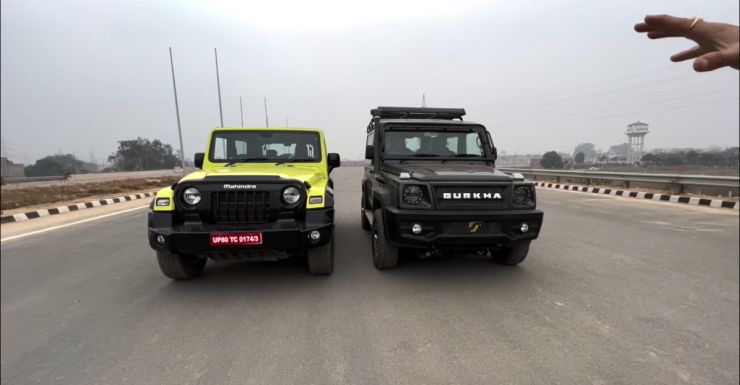 Mahindra Thar one the first round. After this, both the SUVs are brought back to the start line and the driver’s exchange vehicles. Vlogger was now inside the Force Gurkha and his friend was driving Thar. The race started and in this round, Force Gurkha managed to get a better launch. It was in the lead but only for a few seconds. Soon after that, Mahindra Thar took the lead and pulled away. Just like the first round, Mahindra Thar won second round of the race as well.

In third round, they did not swap the cars and continued with the third round. The results in the third round were not different. Mahindra Thar won all three rounds and was declared the winner of the race. None of these SUVs are meant for high speed drag races.

These are off-road SUVs and off-roading is what they are best at. But, if you compare Mahindra Thar and Force Gurkha, Thar has a much more powerful engine which helps it both off and on the road. Mahindra Thar diesel is powered by a 2.2 litre turbocharged mHawk engine that generates 130 Bhp and 320 Nm of peak torque. Force Gurkha is powered by a 2.6 litre turbo diesel engine that generates 91 Hp and 250 Nm of peak torque.