Mahindra launched Thar SUV in the market couple of years ago and it quickly became favourite among SUV buyers in India. The Thar still has a waiting period as long as an year on it. Thar is a capable off-roader and we have seen several off-road videos of Mahindra Thar online. Volkswagen launched their Taigun SUV in India last year and is doing pretty well. It is based on the same platform as Skoda Kushaq and is Volkswagen’s first product under India 2.0 Strategy. Here we have a video where Mahindra Thar and Volkswagen Taigun are competing against each other in a drag race.

The video has been uploaded by Power On Wheel on their YouTube channel. The video starts with vloggers talking about technical specification of both the SUVs. They mention that both SUVs belong to different category and they are doing this race just for fun. Mahindra Thar used here is the diesel automatic whereas the Taigun is the 1.5 TSI version. Mahindra Thar diesel is powered by a 2.2 litre turbocharged mHawk engine that generates 130 Ps and 320 Nm of peak torque.

The Volkswagen Taigun on the other hand has a 1.5 litre turbocharged petrol engine that generates 150Ps and 250 Nm of peak torque. In comparison to Volkswagen Taigun, Mahindra Thar is heavier and on paper it has better power as well. Both the SUVs were line up for the race. Vlogger was in the Mahindra Thar for the first two rounds. He mentions in the video that they have opted for a road with no vehicles on it for safety reasons.

The race starts and surprisingly, Mahindra Thar is the one to have a better start. The Taigun did move off the line but, it was not as aggressive as the Thar. Mahindra Thar was in the lead for good amount of time. After 70-80 kmph, things started to change. Volkswagen Taigun started showing off its true colours and it smoothly overtook Mahindra Thar from the other lane. By the time both vehicles touched 100 kmph mark, Volkswagen Taigun was in the lead and it was announced as the winner of the round. 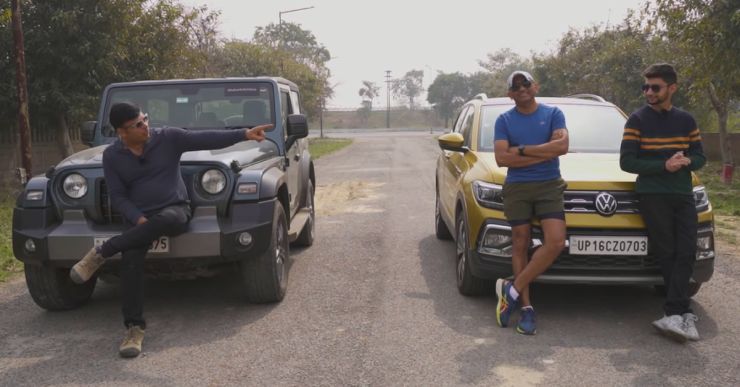 Mahindra Thar is getting a good amount of low end torque which is pushing it off the start line faster. Taigun has a better high-end performance and that is why it overtakes Mahindra Thar after certain point. The design of both the vehicle also play an important role in such race. Taigun also had better power to weight ratio which helped it during the race.

For the third round, driver’s swapped the vehicles and the vlogger was now driving Taigun. The race starts and just like first and second round, Mahindra Thar was in the lead for some time and after that Taigun took the lead and won the round. Both SUVs performed pretty well and Taigun was announced as the winner in this race.