Mahindra XUV700 is probably the most discussed SUV on the internet in India. It was launched in the market last year and it quickly became popular among buyers in a short span of time. The car currently has a waiting period of almost 19 months depending up on the variant you choose. XUV700 is now commonly seen on the road and several accessories have also started arriving in the market for XUV700. Here we have one such video, where a AX5 variant of Mahindra XUV700 gets customised interiors.

The video has been uploaded by Raahee on their YouTube channel. In this video, a new Mahindra XUV700 had come to the workshop for interior customisations. As this is the AX5 variant, it misses out on many features and it comes with fabric seats instead of leather upholstery. To start the work on the interiors, the seats on the XUV700 was removed. The plastic trims on the door were also removed for customisation.

On the outside, no major customisations were done to the SUV. It got a side step for easy entry and exit from the vehicle. Everything else on the car is stock. Moving in, the all-black cabin in the XUV700 has been completely transformed. The SUV now gets a dual tone theme for the cabin. It is a combination of black and almond colour. The fabric seats on the car have been replaced with custom fit leatherette seat covers. The fit and finish of the seat looks brilliant. The all-black dashboard on the XUV700 also gets leatherette soft touch wrapping on it. The almond colour wrap can be seen on the door pads as well.

Coming to the rear, a complete makeover has been done to the second row seats. Mahindra offers XUV700 with bench seats at the rear only. As part of the customisation, the second row bench seats have been completely removed and replaced with a custom made captain seat with individual armrest. One of the major attraction on these seats are the electrically adjustable leg support. The angle of this support can be adjusted using a lever electronically. 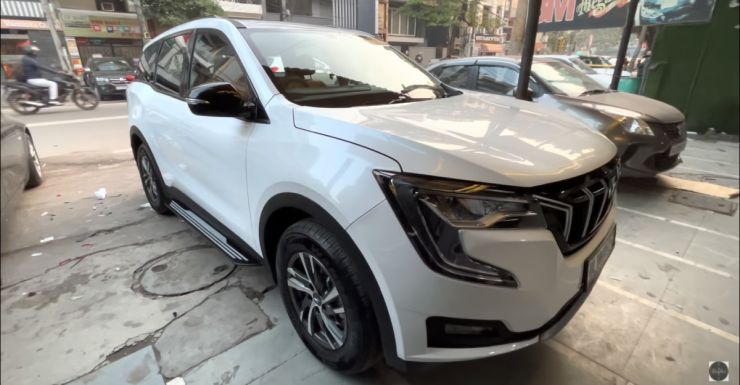 Video mentions that these customisations have been done without tampering any of the existing wires and the warranty of the car will not be affected. Other than this, the cabin also gets ambient lights on the dashboard and the door panels. The AX5 variant does not come with rear parking camera. That has also been installed and integrated to the existing touchscreen infotainment system. Overall fit and finish and the quality of work done on this car looks pretty well. Mahindra XUV700 is the most technologically advanced vehicle from the manufacturer yet. It offers features like Adaptive cruise control, Lane Keep Assist, Lane Departure warning, Automatic Emergency Braking, Forward Collision warning and so on.