For the last couple of years, Mahindra has been launching new models in the market. Firs they launched the all-new Thar in 2020 and last year they came up with the all-new XUV700. Both the SUVs became an instant hit among buyers and there is a long waiting period on both the SUVs. Mahindra offers AWD as an option with the top-end XUV700 and with the all-new Thar 4×4 is standard. We have seen several videos of Mahindra XUV700 online and here we have one such video where the SUV gets stuck in snow and is later recovered using the current generation Mahindra Thar.

The video has been uploaded by Iamdhruvkaran on their YouTube channel. In this video, vlogger and his friends are travelling in the all-new XUV700 and Mahindra Thar. They are heading towards the mountains to see snowfall. There is an experienced off-roader in the group and both the vehicles were travelling together. They were travelling towards Atal tunnel which has become a very popular tourist destination ever since its inauguration.

As they cross the Atal tunnel, the landscape completely changed. There were snow capped mountains and snow on the road. The group was planning to go towards Sissu. After crossing the tunnel, they stopped and picked up essentials and started moving. After driving for some time, they reached a place where people were driving on snow. Mahindra XUV700 driver took the SUV into the snow and regretted the decision soon after that. 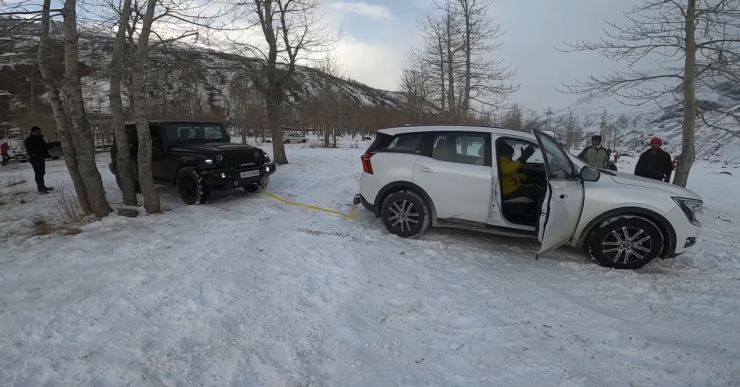 The XUV700 seen here in the video is not the AWD version. It is the AX7 L 2WD version. The front wheels on the XUV700 lost the traction and were spinning freely. Vlogger can be heard saying in the video that the driver behind the wheels in Mahindra XUV700 is quite experienced and he is trying his best to get the SUV out. Unfortunately, all his efforts were in vain. The front wheels kept on digging inside the snow and the SUV was not going anywhere.

After several unsuccessful trials, the Mahindra Thar which was with the group, came to the rescue. The group was carrying tow rope and hooks which was a good decision. They took out the rope and tied both the SUVs. Mahindra Thar then slowly started pulling the XUV700 out and in no time it was free. Mahindra Thar was driven on the snow without any problems as the 4×4 was engaged. Mahindra XUV700 could have performed well if it was the AWD variant. The tyres also play a crucial role in such situation. XUV700 is equipped with Highway Terrain Tyres which are not suitable for such snowy conditions.

Mahindra Thar on the other hand comes with All-Terrain tyres from factory which are capable to some extent. Snow is one of the most trickiest surface to drive a car. One has to be extremely careful while accelerating and braking as the chances of losing control over the vehicle are very high. We do not recommend taking 2WD vehicles on such surfaces as the chances of getting stuck in snow or any other off-road terrain are high.