Mahindra launched the all-new XUV700 SUV in the market last year. It is without any doubt, the most technologically advanced SUV from Mahindra so far. It offers several features that no other SUV in the segment offer. Mahindra XUV700 became so popular that soon after the launch, waiting periods on this SUV started going up. Depending upon the variant you choose, Mahindra XUV700 has a waiting period as long as 19 months. We have seen several videos of Mahindra XUV700 in the video and here we have one such video where a brand new XUV700 is seen competing against a pre-facelift Toyota Fortuner in a drag race video.

The video has been uploaded by Pratham Shokeen on their YouTube channel. The video starts with vlogger asking both contenders about the engine specifications and approximate weight of the SUV. The Mahindra XUV700 is available with both petrol and diesel engine options. The one seen here is the petrol automatic version which is powered by a 2.0 litre turbocharged engine that generates 197 Bhp and 380 Nm of peak torque.

Toyota Fortuner seen here is the pre-facelift diesel automatic variant. This is the 4×2 variant. The SUV is powered by a 2.8 litre turbocharged diesel engine that generates 176 Bhp and 450 Nm of peak torque. In comparison to the XUV700, Toyota Fortuner was slightly lighter in terms of weight. Vlogger was initially driving the XUV700 and his friend who owns the XUV700 was sitting next to him. The other vlogger was driving the Fortuner.

Both the SUVs were lined up and the race starts. On paper, XUV700 was more powerful and was expected to win the race. As soon as the race starts, Fortuner just took the lead immediately as the vlogger launched it properly, the vlogger did not launch the XUV700 as it was a new SUV. The Fortuner was in the front already and it looked like the Fortuner was going to win the race. Even the XUV700 owner can be heard saying in the video to stop the race and redo the first round as he thought, XUV700 did not launch properly. 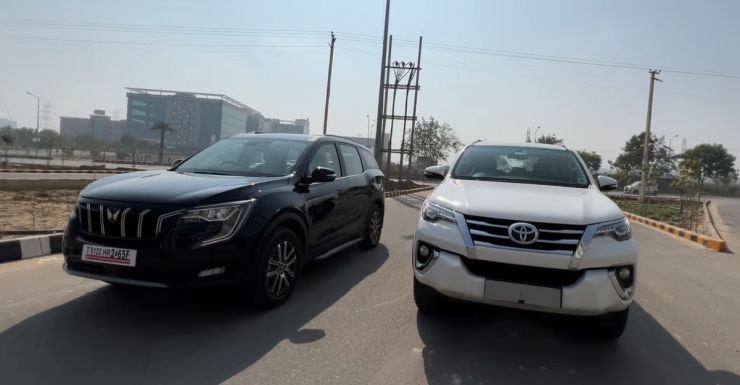 The XUV700 slowly started picking up speed and started chasing Fortuner. The vlogger who was driving the XUV was very confident and said, it would win the race even if it doesn’t get a proper launch. halfway through the race, XUV overtakes the Fortuner and takes the lead. It maintains the lead for rest of the round and won it.

In the next round, the owner of the XUV700 was in the driver seat and vlogger was filming him. This time, he launched the XUV and the initial gap between the SUVs reduced. Within seconds, Mahindra overtook Fortuner on the other lane and it kept on picking up speed. Toyota Fortuner was struggling to keep up with XUV700. Second round was also won by XUV700.

In third and last round, driver’s were swapped and the vlogger who was driving the Fortuner was now inside the XUV700. In this round, he managed to give the XUV700 a better launch and that resulted in instant lead right from the start. Toyota Fortuner could not overtake XUV700 at any point.