In the past, we have seen motorists taking cops for a ride on their bonnet trying to evade challans. Here is an instance where a man sat on the bonnet to enjoy and got arrested with his friend, who was driving the car. Here are the details.

They wanted to experience the cool breeze but chose the wrong location & landed up getting the chills at Bandra PStn.

Allowing his friend to ride on the bonnet of his car cost dearly to two men who were booked under IPC Sections 279 & 336 #RoadSafety pic.twitter.com/9LNifKCQTh

The accused Imran Ansari and Gulfam Ansari were arrested by the police following the viral video clip. Both are employees of a private company that owns the car used in the stunt.

The incident happened at 8:50 PM on Monday. The passengers in the car were heading to BKC. Imran was sitting on the bonnet of the car while Gulfam was driving it. The police alerted the control room following the video. The control room tried to locate the car but failed. Finally, the police tracked down the duo on Tuesday evening in Kurla and arrested them.

Both of them apologised

Mumbai Police released a video of the duo after the arrest. Both of them acknowledge doing the stunt and apologised for the same. They also promised to never repeat it again. Mumbai Police has not updated if they were released after the apology or were held in captivity.

The Mumbai Police also said that both of them were booked under Indian Penal Code Sections 279 and 336. The sections address rash driving and endangering the lives of others or personal safety.

Getting out of the window and sunroof is also illegal 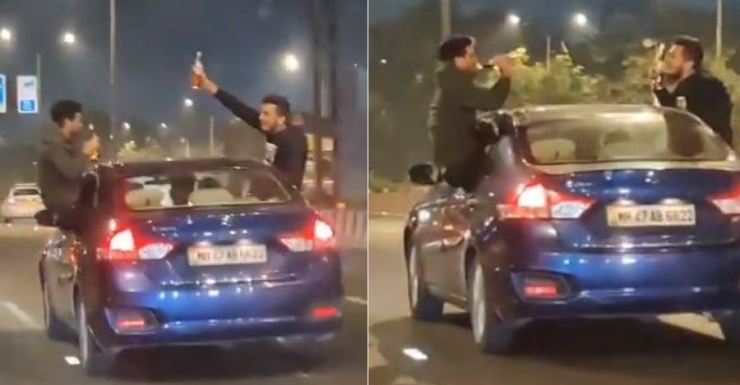 Such incidents are not rare though. In 2020, Mumbai Police tracked down a car where a duo came out of the car and sat on the windows while drinking alcohol. The duo was arrested as well.

In Kolkata, the traffic policemen of the Lalbazar area in Kolkata started a campaign against people who pop out of the sunroofs of moving cars. The drive started after the police came across a lot of instances where people were risking their lives by popping out of sunroofs in busy areas of the city like Maa and AJC Bose Road flyovers. The traffic police imposed a fine of Rs 1,000 on the violators under Section 184 (F) of the Motor Vehicles Act.