Maruti Suzuki Brezza is one of the most popular compact SUV in the segment. The SUV competes with cars like Hyundai Venue, Kia Sonet, Nissan Magnite, Renault Kiger, Toyota Urban Cruiser and many more SUVs in the segment. The car got an update few years ago and the manufacturer is now working on new version of Brezza which is likely to be launched in the market later this year. Maruti offers a variety of customisation options with its models. Customers have the option to either choose customisations of their choice online or at the Arena dealerships. The same is available for Maruti Brezza and they now have released a new TVC for the same.

The video has been shared by Maruti Suzuki on Arena’s official YouTube channel. The iCreate is actually a unique personalisation program that Maruti is offering for their customers. Instead of going with a regular set of modification accessories, this program offers the customer a liberty to choose or customise the car as per their liking. Every car and car owner is different and the customisations actually speak a lot about the personality of the owner.

In the newly released video, it is clearly shown that Maruti is offering graphic decals for the roof, ORVM covers in contrasting colours and other accessories. Maruti is also offering a variety of alloy wheel options along with plastic and chrome garnishes for headlamps and fog lamp area. A faux skid plate garnish, chrome door handles, spoiler garnish with carbon fibre pattern are all seen in the video. 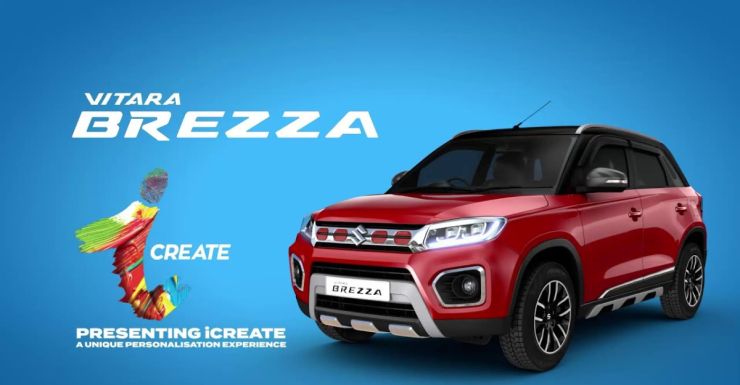 The customisation options are not limited to exterior. Interior also gets decent number of customisation options. The plastic trims on the dashboard can be customised in different colours and patterns. There is a variety of seat covers available with the Brezza as well. Maruti is also offering wireless charging feature for phone as an accessory with Brezza. With iCreate customisation program every Maruti Brezza owner can personalise his or here SUV to his liking.

This feature is not just available for Maruti Swift as well. Maruti Suzuki Brezza is one of the most popular sub-4 meter compact SUV in the segment. It was available with a 1.3 litre turbo diesel engine which was known to be the national engine of India. This engine was sourced from Fiat and had to be discontinued as part of BS6 transition. Maruti does not offer diesel engine with any of there SUVs anymore.

The Brezza received a cosmetic update and an in-house developed 1.5 litre naturally aspirated petrol engine. The engine generates 105 Ps and 138 Nm of peak torque. The petrol engine is offered with both manual and 4-speed automatic transmission option. The 2022 version of Brezza which is yet to be launched is expected to come with several cosmetic changes. The front fascia of the SUV is likely to be revised and so are the interiors. Coming to the engine, it is likely to offer the same engine but, instead of a 4-speed automatic transmission, Brezza is likely to get a 6-speed torque converter automatic gearbox. A manual gearbox will be offered as usual.