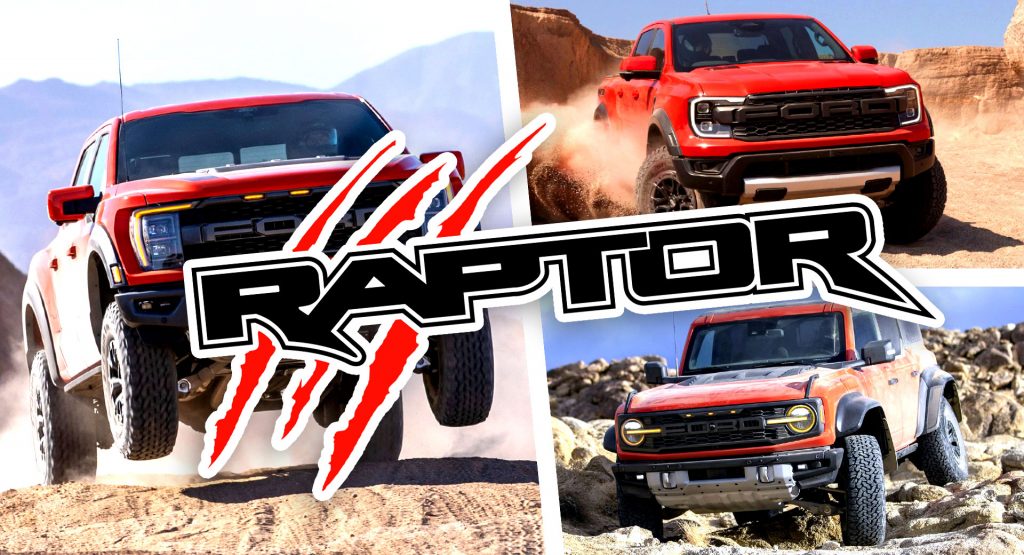 Ford Performance seems to have hit the nail in the head with its Raptor range of high-performance off-road prepped trucks and SUVs, prompting many other automakers to follow its example. While most buyers won’t be exploiting the full potential of the Baja-ready vehicles, everyone likes the road presence and performance credentials that come with the Raptor badge.

The nameplate was introduced with the 2010 F-150 SVT Raptor which proved to be quite successful, prompting Ford to launch similar versions of two more F-150 generations. The smaller Ranger Raptor joined in 2019 creating a loyal following in Europe, with the recently revealed new generation improving all aspects. Finally, the mighty Bronco Raptor was unveiled for the US earlier this year as the first non-pickup member of the family.

Common features of Raptors include powerful twin-turbo EcoBoost V6 engines, a reinforced ladder-frame chassis, heavy-duty suspension with FOX dampers, beefier tires, and tougher looks compared to their lesser siblings. The current range also benefits from Ford’s Terrain Management System with seven selectable modes suitable for all terrains/conditions. So let’s start examining the existing Raptors plus another one that has been confirmed for the near future.

Starting with the new kid on the block, the second-generation Ranger Raptor takes the strengths of its predecessor and improves on them. The flagship variant of Ford’s midsize pickup looks like a mini F-150 thanks to the redesigned bodykit with off-road bumpers and wide fenders.

While it has big shoes to fill, Ford claims it is significantly faster than the model it replaces due to the new twin-turbocharged 3.0-liter V6 engine producing up to 392 hp in AU-spec. The European model is down on power in order to comply with emission regulations but it still represents a 30 percent increase in performance over the outgoing diesel and is even more capable off the beaten track thanks to longer suspension travel. The sound is also significantly improved with an active exhaust featuring a straight-pipe Baja mode.

The third installment of the Ford F-150 Raptor series was introduced in 2021 based on the fourteenth generation of the F-Series bestseller. It retains the aggressive styling cues including the power dome hood, steel bumpers, skid plates, black grille with Ford lettering, and fender flares combined with a more modern exterior and a tech-filled interior.

The 3.5-liter EcoBoost V6 engine, while slightly updated, still produces the same 450 hp as its predecessor, but off-road capabilities have been improved a lot. The new Raptor-specific suspension combines a five-link setup with coil springs on the rear axle with FOX dampers at the front, featuring more travel than ever before. The truck also gets a standard electronic locking rear differential and available Torsen front limited-slip differential.

The Ford F-150 Raptor is not alone in the segment anymore, with the rival Ram 1500 TRX bringing immense V8 power into the game. Ford Performance won’t leave this challenge without an answer, since it has already confirmed the upcoming F-150 Raptor R with a V8 under the bonnet.

While nothing has been confirmed yet in terms of specifications, the supercharged V8 from the Shelby Mustang GT500 sounds like the best candidate for the job, bringing the F-150 Raptor on par with the Ram 1500 TRX above the 700 hp mark for sportscar-rivaling performance credentials. We guess that the Raptor R will get a few styling tweaks to differentiate it from its V6-powered brother, although the two models will be easily distinguishable from the sound.

Last but not least, the first Raptor-based model with a closed bodystyle is the Bronco. The iconic off-roader returned in 2020 as a Jeep Wrangler rival based on a reworked version of the Ranger’s ladder-frame chassis. Thus, Ford couldn’t resist not giving it the Raptor badge with the ultimate flagship appearing in 2022.

The base Bronco was already pretty capable in any kind of terrain but the Raptor took it to another level. This is evident from the exterior with the Bronco Raptor looking taller, wider, and tougher. Besides the increase in ground clearance and track width and the larger wheels, the Raptor gets new hardware. Changes include a more sophisticated 4×4 system, Dana axles, FOX dampers, increased suspension travel, and of course more power from the V6 engine with Ford promising over 400 hp.