Mitsubishi has revived its Ralliart performance nameplate for a performance-focused SUV concept, which will be one of seven models on show at the 2022 Tokyo Auto Salon.

The muscular Vision Ralliart – based on the second-generation Outlander – is one of two brand-new concept cars to be revealed. It hints at how Mitsubishi will mark out performance-inspired Ralliart models from standard cars, with its bulky front and rear bumpers, domineering front grille and large rear diffuser, which the firm says is “reminiscent of a race car”.

The Vision Ralliart will be painted in matt black with a subtle blue undertone that can be seen when hit by light.

Mitsubishi claims the model upholds the famed Ralliart performance legacy, with hardware upgrades extending to its widened stance, 22in wheels and large brake discs with opposed-piston six-pot calipers. There is no indication that the standard car’s plug-in hybrid powertrain has been significantly reworked. 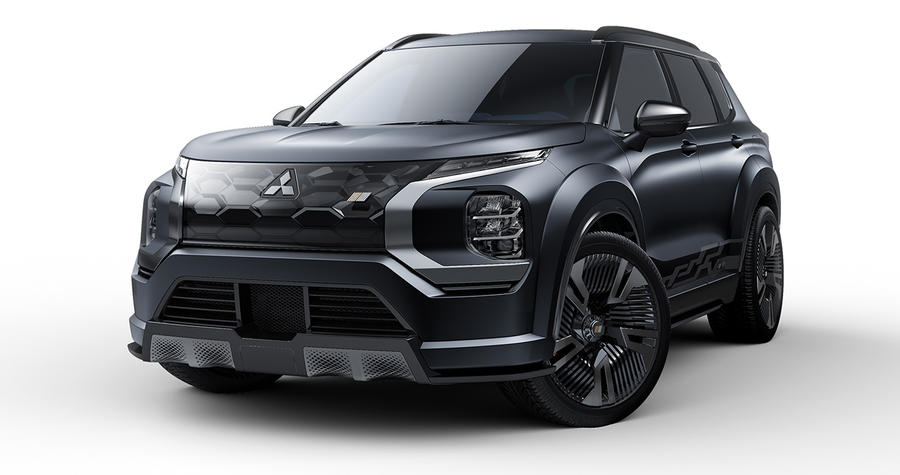 The firm has previously hinted at plans to revive the Ralliart name for a factory-backed motorsport effort, but has yet to confirm in which discipline it could race.

“The Vision Ralliart Concept embodies Mitsubishi Motors’ vision for the new Ralliart and brings together the company’s engineering and passion for Monozukuri challenges (craftsmanship),” the firm said.

“Styling is given a premium look with impressive presence on the road, and the comfortable ride with peace of mind in various weather and road conditions – characteristic of Mitsubishi vehicles – is further refined.”

The second-generation Outlander is the first new Mitsubishi model to go on sale since the brand announced it was exiting the European market in 2020.

Mitsubishi will also showcase a new electric kei car concept in Tokyo, the K-EV Concept X, alongside five other custom cars based on existing production models.

The production-spec Outlander will be presented in a new ‘Ralliart Style’ specification, with white exterior paint and black alloy wheels, side decals and mudflaps. The Outlander will also be on show in one-off Adventure Style specification, equipped with a camping kit and strengthened bumpers.

Versions of other models not previously sold in the UK will be on show too, including the Delica D:5 Tough x Tough, the Eclipse Cross Ralliart Style and the Minicab-MiEV B-Leisure Style.