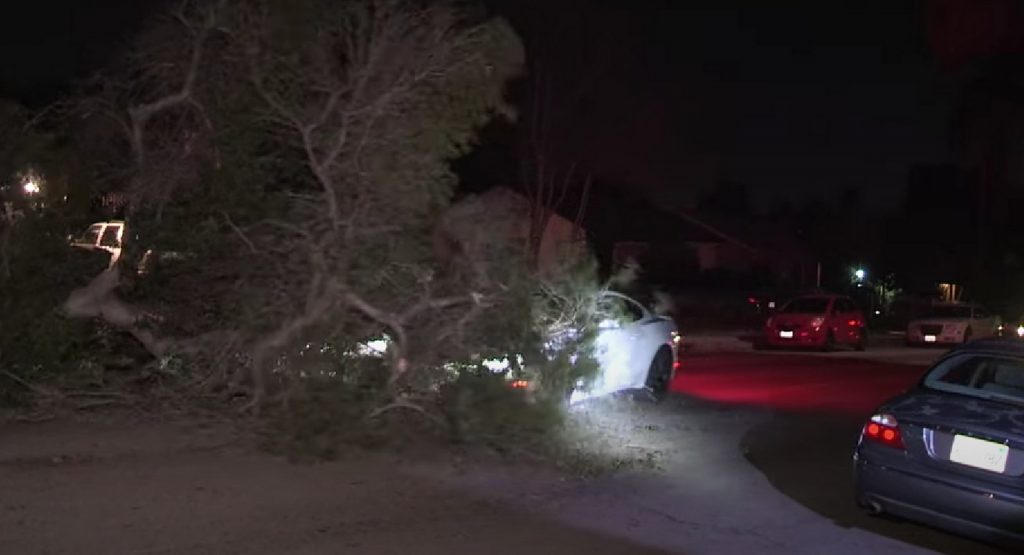 Not too long ago, I wrote an article asking if we should start including other modern pony and muscle cars in with the Mustang memes and the wider internet seems to believe that Nissan Altima drivers deserve to be included, too. Apparently, that has gotten Mustang drivers jealous because one has gone and staked his brethren’s claim to the meme crown.

A new video from San Bernadino published by onscene.tv shows footage of a tree that fallen onto what appears to be a residential street, following gusty winds that shook the Inland Empire area of California.

Words cannot express how obviously this tree was taking up half the road and the follow-up shot of a Civic calmly stopped before it waiting to turn around is proof that, even though trees are camouflage-colored (as one Reddit commenter noted), most drivers were more than equipped to prevent an accident.

Read Also: Ford Mustang Smashes Into BMW X1 Causing It To Flip Over

The Mustang driver, on the other hand, just keeps going until he has to jump on the brakes (at a speed that doesn’t even cause them to squeal, just chirp) and runs into the tree. Fortunately, the crash is pretty gentle and the driver only runs into the thinner branches, but it does look like there’s a little light damage as a result of the impact.

To the driver’s credit, someone on the side of the road, who could be trying to be helpful, did point their flashlight at the driver of the Mustang as they were headed towards the tree. Although I too was alarmed at the fact that the car didn’t appear to be slowing down at all, the flashing light may have done more to distract the driver than help them.

Well, at least they didn’t try to do a donut to turn around and run into several other things…