Doing stunts on public roads is an offence as it puts your and life of others at risk. in Maharashtra’s Nagpur, cops seized five vehicles and booked seven people after a video of the youths doing stunts on top of the car went viral on social media. The incident reportedly happened in place called Chhaoni in Nagpur city on April 1. After the cops came across the viral video, they decided to book 7 youths who were involved in the stunts and also five vehicles that they had used for the stunts.

According to reports, the car that were used for the stunts had arrived at a workshop for repair works. After the repair, the mechanic had given the car to his friends for test run. The seven offenders took the cars out and used them for doing movie style stunts while standing on top of the roof. The group reached Chhaoni area and they continued with the stunts while standing on the roof. Soon public gathered at the spot and many of them started making videos of the same. Within days, the video of there stunt went viral on the internet and soon grabbed Nagpur city police’s attention. Considering the seriousness of the matter, police soon took action against the offenders. 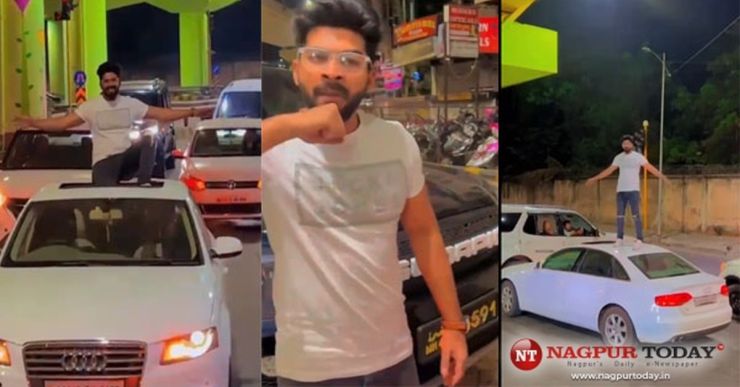 Sadar police registered a case in the matter and started investigation. Soon cops seized five cars that were seen in the video. An Audi A4 luxury sedan, Mahindra Scorpio, Volkswagen Vento, Tata Safari Storme and a Renault. Nagpur police have registered a case against Musheer Sheikh, Vipin Nair, Melvin Varthin, Asslan Beg, Shahnawaz Qureshi, Hasan Shaikh, Imran Ansari under different sections of the Motor Vehicles Act. The exact sections under which the 5 youths have been booked in not mentioned. In the video that went viral, a group of vehicles were seen on the road while one of them from the group had climbed on top of the Audi car. They were making a video for social media but, it looks like things did not go as per their plan.

Doing stunts on public roads is a risky thing. Especially in India, where the roads are filled with vehicles almost all the time. By doing such stunts on public roads the person is not only putting his life in danger but, also creating inconvenience and being a threat to other road users. A person driving or riding a vehicle can easily get distracted if he sees people standing on top of a moving car. This can even lead to an accident. For the person standing on top of the car, he can loose balance while the driver accelerates. He has nothing to hold on to. Chances of him falling from the car and getting injured were also high luckily nothing of that sort happened. If you are interested in doing such stunts either on car of two-wheelers, it is always recommended to go to a private property or road. Also ensure that no other vehicles come of the property or road while performing such stunts.