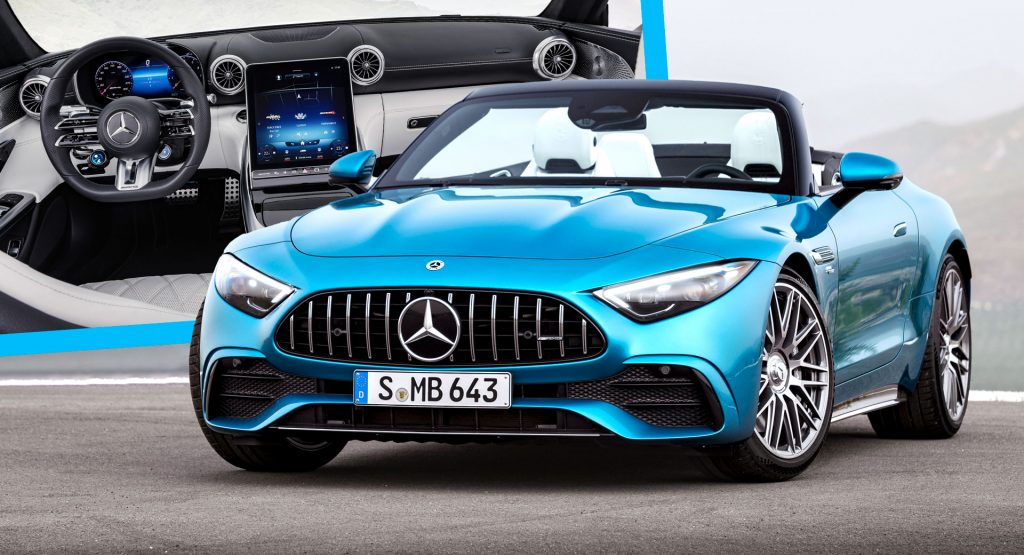 Nearly six decades after the last four-cylinder SL rolled off the production line in 1963 and Mercedes is re-introducing a four-banger in its flagship roadster lineup in the form of the new 2023 Mercedes-AMG SL43.

Following the introduction of a pair of bi-turbocharged 4.0-liter V8s in the SL 55 4Matic+ and SL63 4Matic+ delivering 470-hp and 577-hp respectively in the R232-codenamed SL last year, the SL43 takes its place as the entry-level model of the 2+2 roadster range.

Powering the base SL is a new variant of AMG’ 2.0-liter four-cylinder M139 engine that uses an electric exhaust gas turbocharger, a technology derived from Formula 1 racing cars, which is a first for a production vehicle. The turbocharger is operated through a 48-volt electrical system that feeds the second-generation belt-driven starter-generator (RSG). Beyond providing a temporary boost in power, the system also works as a mild-hybrid allowing a gliding mode and energy recovery for increased efficiency.

Less power than the A45 S

Elsewhere, the base version of AMG’s soft-top roadster comes fitted as standard with an AMG RIDE CONTROL steel suspension and an AMG DYNAMIC SELECT system with five driving modes or six if you opt for the optional AMG DYNAMIC PLUS Package which adds “Race” to the existing “Slippery”, “Comfort”, “Sport”, “Sport +” and “Individual”. The Plus Package also adds a few more goodies to the mix, including a 10mm lowered suspension, different engine mounts, an electronically controlled limited-slip rear differential and yellow brake calipers.

How can I tell it’s a four-cylinder SL ? 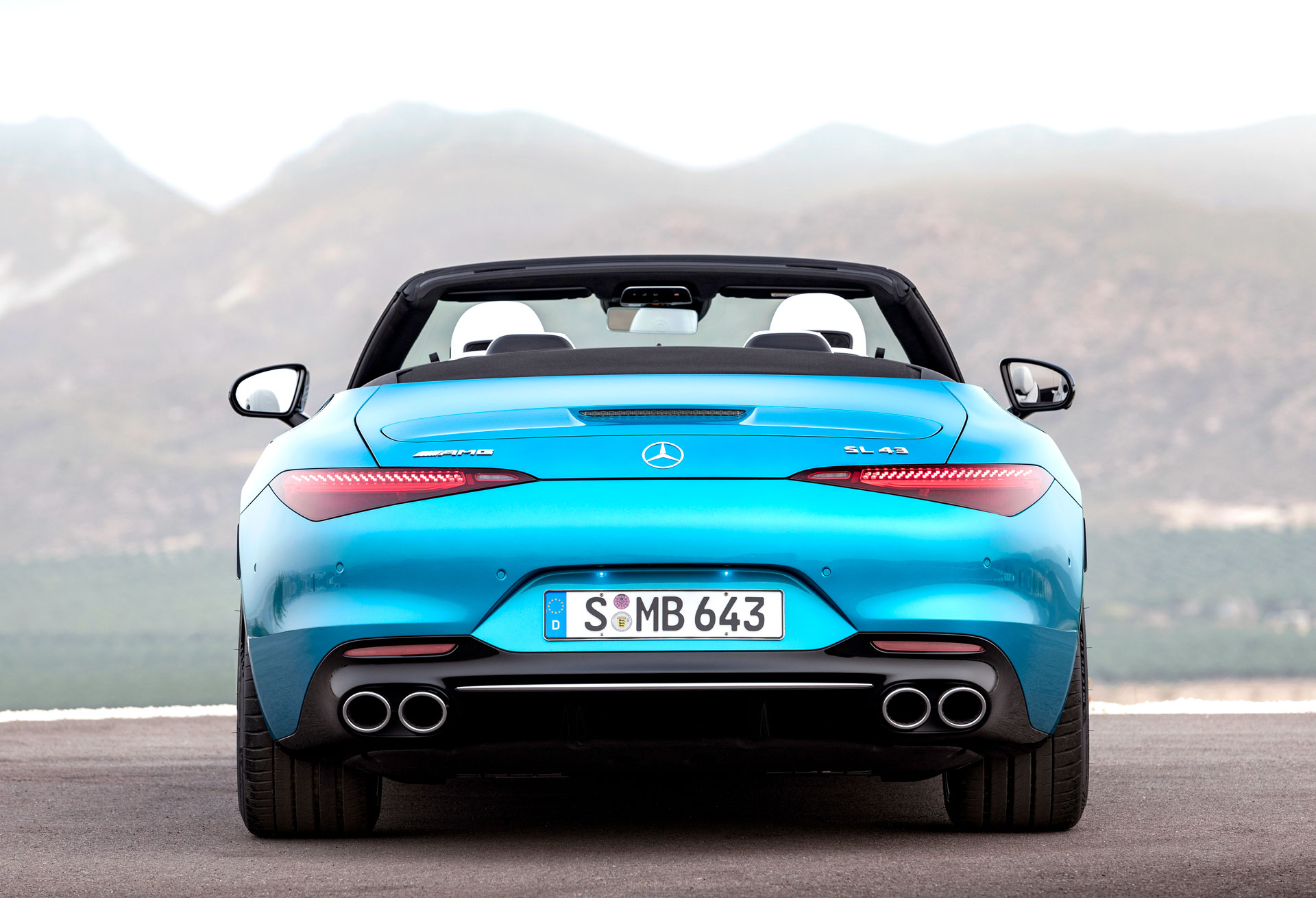 Glad you asked. For those of you who aspire to be that guy pointing out the four-cylinder engine under the hood in case someone opts to delete the badging, the easiest way is to spot the round instead of the angular double tailpipe trim found in the V8s. The SL 43 also runs on smaller 19-inch wheels as standard, but you can also get the same larger 20 or 21 inch rims available in the eight-cylinder models as an option.

Speaking of options, Mercedes hasn’t held back at all offering anything and everything from an active rear-axle steering (HAL) system that turns the rear wheels either in the opposite direction (up to 100 km/h or 62 mph) or in the same direction (faster than 100 km/h) as the front wheels and MANUFAKTUR individual colors to Carbon and Chrome exterior packages.

Will it come to North America? 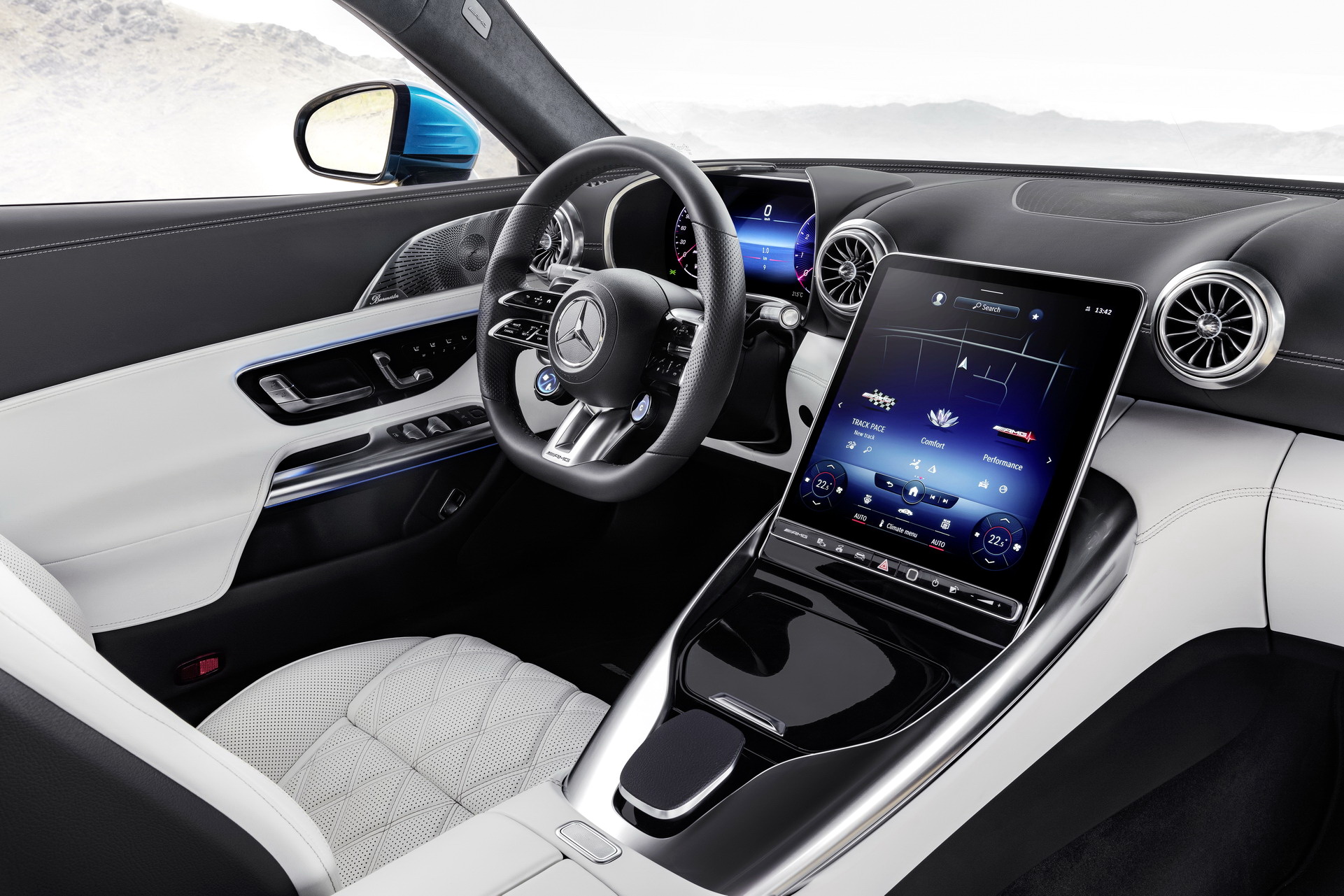 We’re not sure yet, but we wouldn’t be surprised if Mercedes kept it out of the USA, as there’s a stigma against four-cylinder engines in higher-end sports and luxury cars at this price point. Still, we’ve reached out to Mercedes and will update this story if and when they get back to us. As for the European market, Mercedes will share availability and pricing details at a later stage.