Skoda has revealed the new Enyaq iV Coupé as its second all-electric model, following the launch of the straight-backed Enyaq SUV last year.

Due to go on sale in the UK later this year, the Enyaq Coupé is effectively a sportily styled version of the existing Enyaq SUV and uses the same Volkswagen Group MEB platform.

It is 4mm longer and 6mm taller than its SUV sibling, but the main design difference is its more sharply raked roofline from the B-pillar backwards. Although that reduces boot space from 585 to 570 litres, it does contribute to a better drag coefficient of 0.234 and – along with the coupé’s lighter weight – marginally increases the EV’s range.

Whereas the Enyaq SUV is offered with two battery sizes, the Coupé will be available with only the larger, 77kWh (net) battery, capable of fast charging from 10% to 80% in 29 minutes.

The entry-level model gets a single rear motor, producing 201bhp, and offers an official range of 339 miles. A twin- motor, all-wheel-drive version will also be available with a total output of 262bhp. 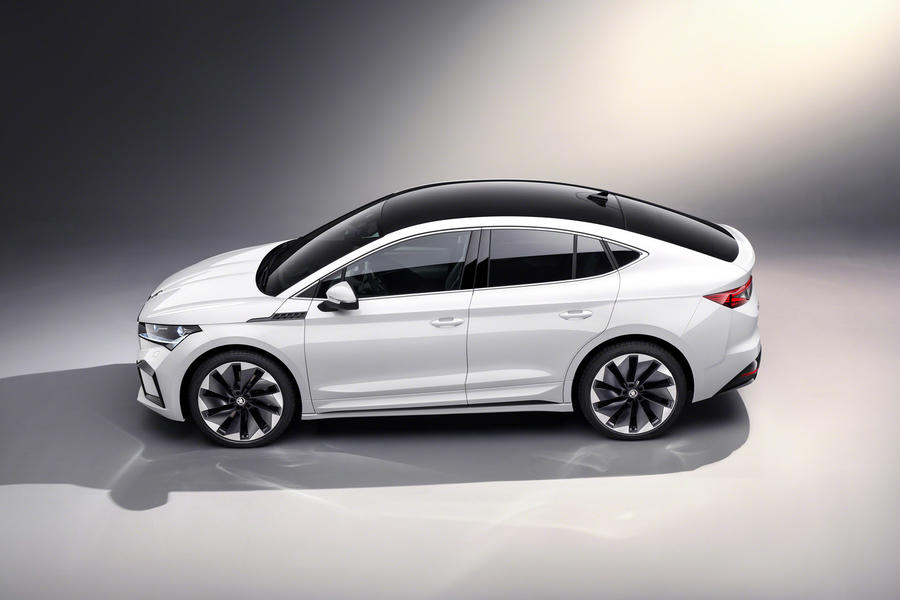 It will also be the first electric model from the Czech firm to gain a hot vRS performance version, which will beat the standard car to market by five months. Skoda will open orders for the standard Enyaq Coupé in May, ahead of customer deliveries beginning in August.

Although the Enyaq Coupé has a similar interior to the SUV’s, with the same 13.0in touchscreen and 5.3in digital cockpit, Skoda has introduced a number of bespoke design touches and two ‘design selections’. It is optionally available in a choice of two Coupé-specific paint shades: Phoenix Orange and Graphite Grey.

Skoda CEO Thomas Schäfer said the new model “brings even more emotiveness, sports styling and elegance to the ŠKODA iV family”, emphasising that it “perfectly combines emotion with efficiency, offering the Skoda-typical generous amounts of space, even in a particularly elegant body”.

Pricing details have yet to be revealed for the Enyaq Coupé, but it is likely to command a small premium over the SUV version, 82kWh versions of which are priced from £39,465.