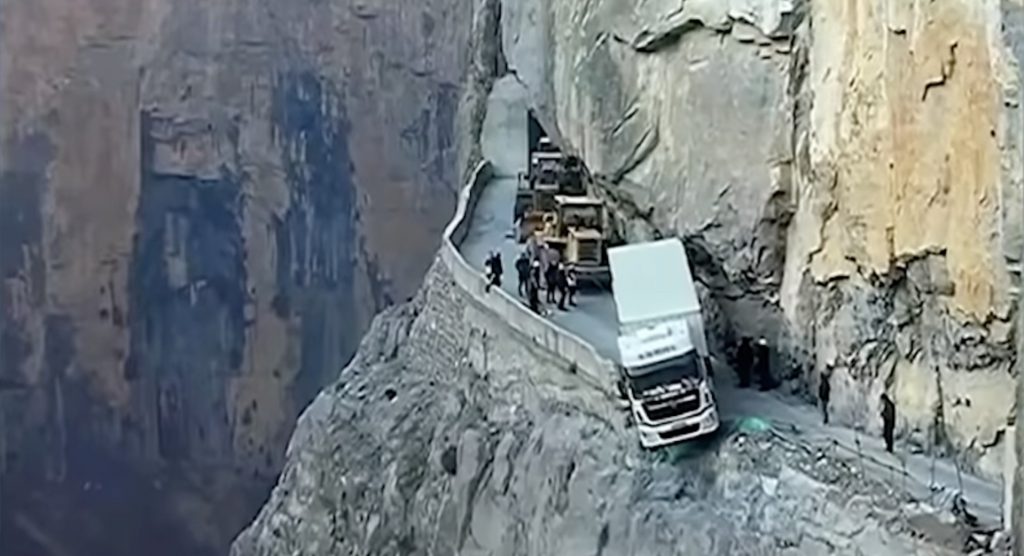 In what must be the worst case yet of satellite navigation directions landing a driver in hot water, a truck in China has been rescued after spending three days dangling over the side of a cliff.

Video footage shows the semi’s cab hanging over the edge of a mountain having skidded off one of those terrifying Chinese roads that’d be scary in a Suzuki Jimny, never mind a full-size commercial truck and trailer.

Incredibly, two people who were in the cab at the time of the mishap managed to escape physically unharmed, though we imagine they might be booking themselves in for some counseling to deal with PTSD.

According to the South China Morning Post the driver followed directions on his navigation app, but got trapped in the middle of the narrow road. From the images it looks like the rocks overhead are tall enough to allow cars to pass below, but have nowhere near enough clearance to let a truck pass. The driver then attempted to reverse the truck, causing it to skid out over the cliff edge.

It looks like the scene in the original 1969 version of The Italian Job when the bus carrying the Mini Coopers and gold skids out of control and teeters over the side of the mountain. That movie ends with Michael Caine telling his crew “Hang on lads, I’ve got a great idea. Er…er,” before the credits roll.

Fortunately someone did have an idea on this occasion and it involved hauling the truck back onto the road using three Caterpillar-type diggers. What’s less clear is what happened to the truck once it was back on solid ground. We already know it couldn’t go forward, and even the best truck driver in the world would struggle to reverse a trailer that big down a road that crazy.