Mahindra Thar is currently one of the most popular 4×4 SUVs in the market. The current generation Thar became so popular after the launch that, it currently has a waiting period of over an year. Many have started modifying their Thar to either make it look more premium inside or enhance the rugged look on the outside. The older-generation Mahindra Thar was popular among off-road enthusiasts and there were hardly any Thar SUVs in the country that did not have at least one modification. Here we have one such last generation Mahindra Thar CRDE that has been modified by Azad 4×4 and looks like a Jeep Wrangler.

The video has been uploaded by AutoHunters India on their YouTube channel. In this video, vlogger talks about two modified Mahindra Thar SUVs. In this article we’ll be talking about the old generation more. The older generation Mahindra Thar has been completely transformed to look like a Jeep Wrangler SUV. Starting with the front the SUV gets a completely revised front fascia.

The Thar gets an aftermarket front grille. The design of the grille is similar to what we’ve seen on Jeep Wrangler. The stock halogen headlamps have also been replaced. It now comes with aftermarket projector LED headlamps with integrated LED DRLs. The bonnet gets latch and moving down, the front stock bumper has been replaced too. The car now gets an off-road bumper made from ABS quality plastic. There are front parking sensors installed on the bumpers as well.

The whole Mahindra Thar has been painted in a shade of white and the bumper, wheel arches and roof are finished in black. This white and black combination looks extremely good on the SUV. Coming to the side profile, the overall design of the car would instantly remind you of a Jeep Wrangler 2-door. The Thar comes with flared wheel arches and turn indicators are mounted on that. 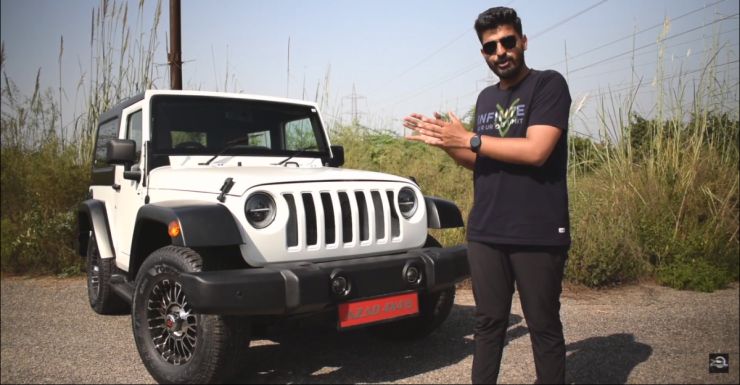 A set of sturdy side steps have been installed on the Thar. The door handles and the ORVMs have been replaced. They are borrowed from a Jeep. The rear wheel also gets flared wheel arches which change the overall side profile look of the car. The stock steel rims on Mahindra Thar has been replaced with aftermarket alloys wheel with chunky tyres.

The soft top on this Mahindra Thar was replaced for a custom made metal hard top roof. This provides better insulation in the cabin when compared to the stock setup. The blacked out roof with white body colour might remind some of you of a Jeep Wrangler. As we move to the rear, the SUV gets split door setup like current generation Thar. The glass at the rear can be opened individually without opening the tailgate fully. The spare wheel is mounted on the tail gate like before.

The original tail lamps on this SUV have been replaced for clear lens aftermarket LED units. The rear bumper has also been customised. It now gets an off-road bumper with parking sensors installed in it. The interiors on this Mahindra Thar have also been customised. Overall, the work done on this Mahindra Thar looks very neat and the SUV will definitely attract attention on the road.