Toyota Fortuner is one of the most popular SUV in its segment. It is a capable SUV both on and off the road and we have seen several videos of the SUV online. Many still have the type 1 and type 2 Fortuner with them because they are very reliable. Many of them are still running around without any major engine issues. Just like any other car in India, many Fortuner owners who get bored by the looks of their old SUV have modified it. We have featured some of them on our website as well. Here we have one such video where a type 2 Toyota Fortuner has been completely modified to look like a current generation version.

The video has been uploaded by Autorounders on their YouTube channel. The video shows how the workshop transformed a regular type 2 Toyota Fortuner to a current generation version. Many of the panels on this SUV were replaced as part of the conversion. Along with the exterior, interior on this SUV was also customised. Starting with the front. The original headlamps, grille, bumper were all removed. The front fascia was completely revised.

Vlogger mentions that many of the parts that are used in this SUV are good quality imported aftermarket units. Instead of a regular new generation grille, the owner opted for the Lexus grille which gives the Fortuner an imposing look. As this was a type 2 Fortuner, some alteration works had to be done to fix the new panels. The bonnet, front bumper and grille, headlamp and the front fenders are all replaced in this SUV.

The headlamps are now sleeker projector LED units and there is a dual function LED DRLs on the bumper as well. The fenders gets custom made flares and the original alloy wheels are now finished in gloss black shade. The side profile of the SUV does not get many changes. From this angle, one can easily recognise that it is not a current generation Fortuner. The rear quarter glass area have a different design in both the generations. The type 2 design has been retained on the side but at the rear, things have changed. 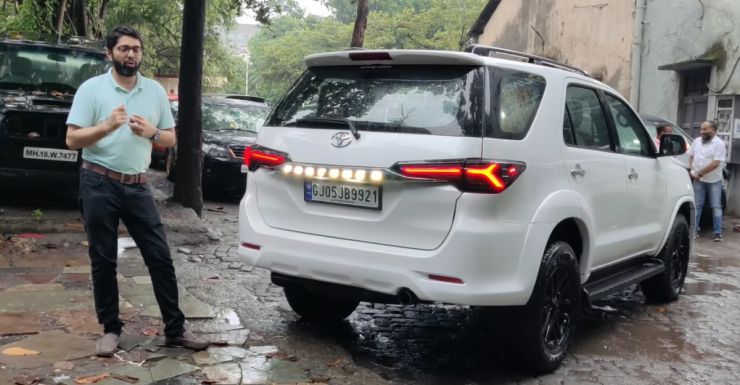 The stock tail lamps on the Fortuner have been removed and the rear has been fabricated as well. The SUV now gets aftermarket tail lamps of the current generation Fortuner. Making such a change definitely requires a lot of expertise and is also a time consuming process. The tail gate has also seen changes. The way tail lamp is placed is actually slightly different form the normal version.

There are some panel gaps visible in the tail gate and the bonnet but, that is something which is expected as both generation SUVs have many changes. The rear looks a bit odd when compared to the original. The whole car has been repainted in premium quality pearl white shade and the interiors have been customised as well. Interiors now get brown and black dual tone interiors. There are custom fit brown coloured seat covers and the similar coloured door pads are also used. The roof liner has also been changed to a premium material. Overall, the work done on this Fortuner looks decent but, is it the best best looking modified Toyota Fortuner? we doubt.