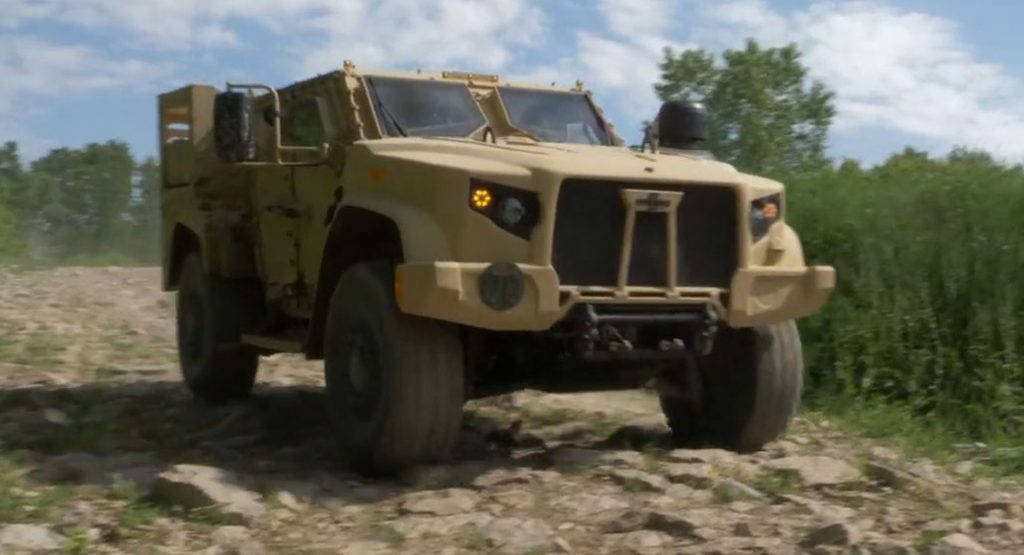 General Motors isn’t the only company working on electrified military vehicles as Oshkosh Defense has unveiled their new eJLTV.

Billed as the “first-ever silent drive hybrid-electric Joint Light Tactical Vehicle,” the eJLTV promises to offer the U.S. Army and Marine Corps the same performance and protection as the standard JLTV but with a number of new benefits including a more than 20% increase in fuel efficiency.

Oshkosh Defense didn’t go into many specifics, but noted the eJLTV has been equipped with a 30 kWh battery pack that allows for “silent drive” and “extended silent watch” capabilities. The lithium-ion battery charges when the diesel engine is running and this eliminates the need for charging infrastructure, which the company notes is “one of the most significant challenges to the widespread electrification of the tactical wheeled vehicle fleet.”

Besides the improved fuel efficiency, the eJLTV acts as a mobile generator and can provide up to 115 kW of power to support combat and reconnaissance missions.

While the company noted the Army hasn’t requested a hybrid-electric JLTV, Oshkosh Defense President John Bryant said the eJLTV proves they have the “team and technical capabilities to produce this highly capable vehicle today.” He added the eJLTV offers “military customers an affordable way to electrify their light tactical wheeled vehicle fleet without compromising the off-road performance or superior protection necessary in combat operations.”

Of course, Oshkosh Defense is likely hoping to attract the government’s attention as the U.S. Army plans to “recomplete” the JLTV program this year and issue a follow-on production contract in September. That contract is valued at $6.5 (£4.8 / €5.7) billion and includes an additional 15,468 vehicles.

While only a handful of people will get to experience the eJLTV, Oshkosh Defense has been tapped to provide the U.S. Postal Service’s Next Generation Delivery Vehicle. That ugly duckling could begin delivering mail by the end of next year.