Renault has set out to democratise the coupé-SUV. Is this endeavour a worthy one?

Why we’re running it: To discover whether this chic new coupé-SUV has the substance to back up its obvious style 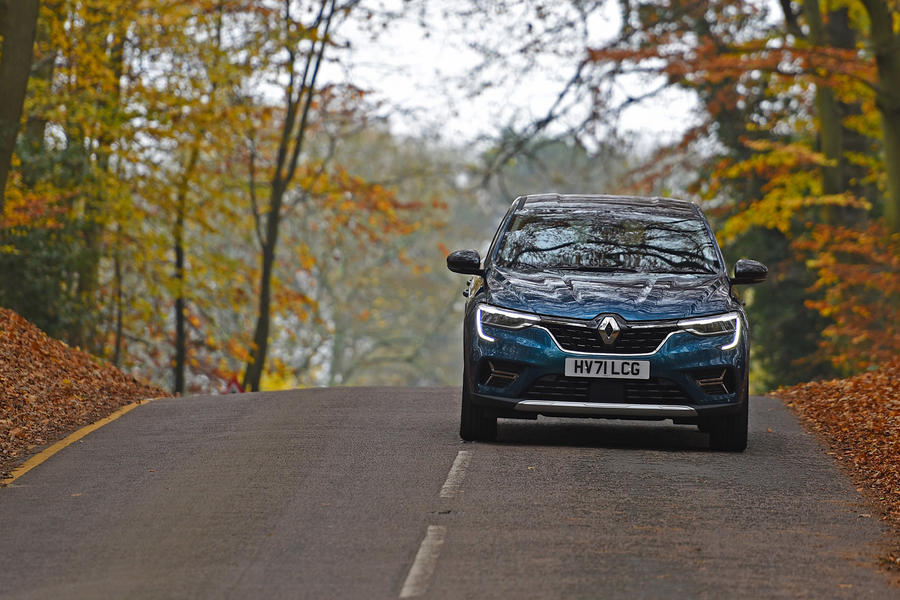 Life with a Renault Arkana: Month 1

When a new niche forms in the car market, it doesn’t always turn into a firm foothold. Remember the Suzuki X-90 of the mid-1990s? It’s the perfect example: who would have thought that the world was crying out for a two-seat, targa-topped 4×4? It wasn’t, of course, and thankfully that particular new avenue for the automotive industry turned out to be a cul-de-sac. Yet the idea of a sportier body shape combined with the raised underpinnings of an off-road vehicle has refused to go away.

The BMW X6 of 2007 was the first to truly make a success of the coupé-SUV concept, despite many at the time (me included) expressing bewilderment at the idea of buying a practical car with much of its practicality taken away. But of course there’s a lot more to choosing a new car than how much junk you can fit in the trunk, and coupé-SUVs quickly became a serious statement of style – and wealth, often sitting at or near the top of their makers’ price lists.

The new Renault Arkana, however, does things a bit differently. For a start, it looks fantastic, easily being the prettiest coupé-SUV yet (to my eyes, at least). Then there’s the price: with the range starting from £25,300 (or £1000 more for the more powerful E-Tech 145), it’s hardly a budget buy, but nor is it in the premium (for which read pricey) bracket that most of this genre occupy. And finally, as Renault proudly trumpets, it avoids being tarred with the profligate gas-guzzler brush by being the brand’s first all-hybrid range – even if that positive message should be tempered slightly by pointing out that the entry-level TCe 140 is only a 48V mild hybrid that can’t run on electric power alone.

Our range-topping E-Tech 145 musters only 3bhp more than that model but can boast a proper hybrid drivetrain, with its 48bhp electric motor (plus a second, smaller one for starting and regeneration) and a 1.2kWh drive battery. That means a certain quantity of EV driving around town, when this powertrain is at its refined best – so much so that you find yourself wishing it were a plug-in hybrid to give it a bit more potential electric-only range. (The amount of spare space under the boot floor suggests that Renault might just have a similar idea, so we will be watching that space with interest.)

Running in tandem with the electric motor is Renault’s 93bhp naturally aspirated 1.6-litre four-cylinder petrol engine, and these two drive units are hooked up to a clever four-speed transmission that’s able to isolate the engine from the driven (front) wheels, allowing it to charge the battery via internal combustion even when you’re trickling along. 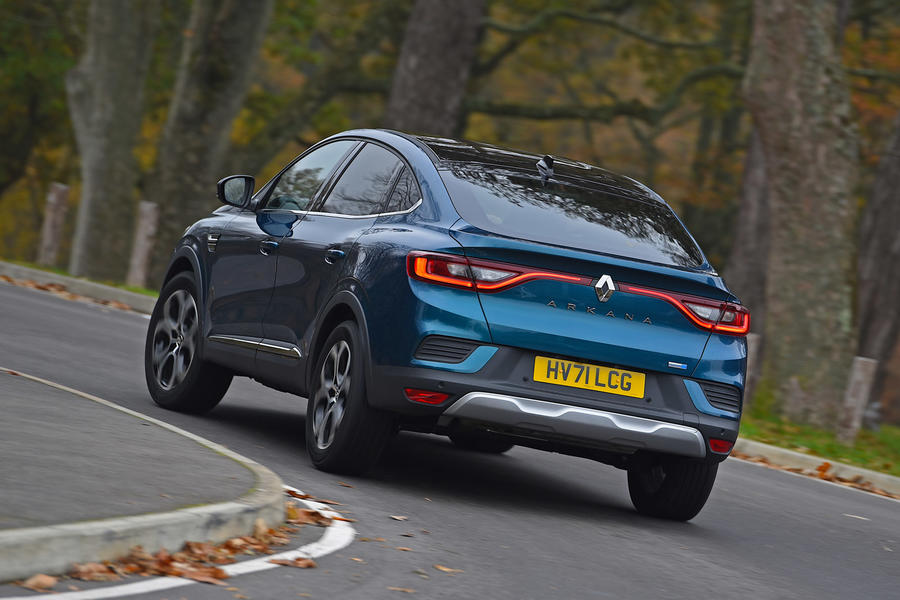 This is great in theory but does result in a few odd looks when you’re trundling down the high street on battery power and the engine suddenly fires up and starts thrashing away at high revs, giving the impression that you’re either stuck in first or suffering from some almighty clutch slip.

Drive around this quirk, though, and the system performs pretty seamlessly most of the time. Clear messaging on the dashboard helps you monitor the battery charge level and give it a boost when necessary by dropping the gear selector into regenerative ‘B’ mode on hills to aid your subsequent progress on the flat.

This isn’t immediately obvious to the untrained eye, but the Arkana is based on not the mid-sized Kadjar SUV but the compact Captur. (Once you know, though, there’s no missing the clear similarity in the front-end styling.) And that does result in a big car with a curiously small-car feel, with its narrow dimensions and slightly perched driving position.

However, the much-stretched wheelbase makes a huge difference to cabin space, with bags of leg room in the rear and decent head room, thanks to the diving rear roofline only really dropping steeply aft of the rear seats.

As well as the space, the kids are kept pretty happy by the number of powerpoints and the separate air- con controls back there – although it feels a bit cheap that the funky interior lighting, whose colour can be changed at the touch of a button, doesn’t stretch to the rear doors.

At a glance, the boot looks to be a sensible shape and a decent size, although not exactly overgenerous. The combination of the (optional) spare wheel raising the floor and that sloping rear roof line means that the usable space is a long way off a conventional estate car – or indeed a conventional SUV. 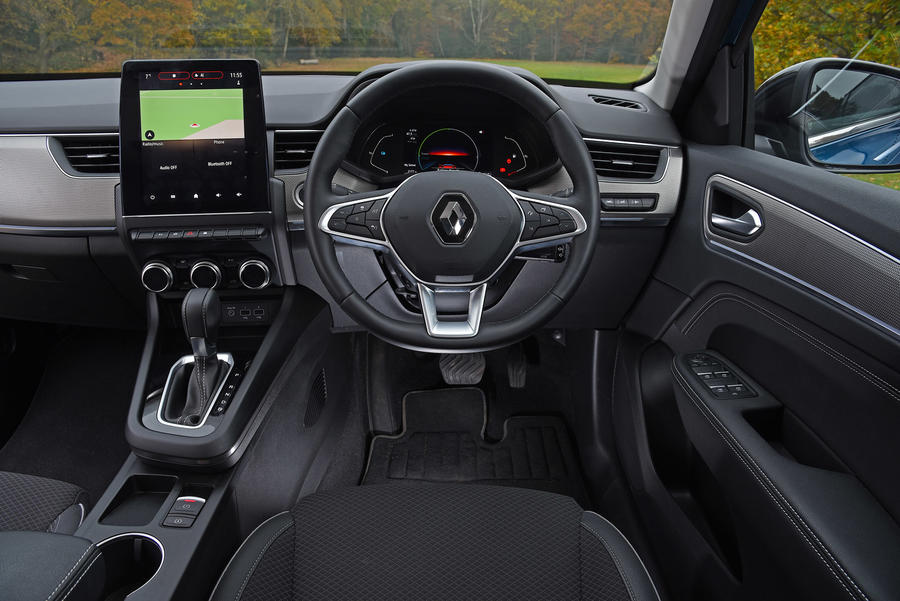 Considering how often I need to carry a bootful, be it of dogs or family detritus, it remains to be seen whether I will be seduced by the Arkana’s style or be yearning to swap a bit of chic for boring practicality in the months ahead.

I like the looks of the Arkana but came away a bit underwhelmed. There are some nice trim touches, such as the panels on the dashboard and doors, but there are hard plastics lower down where you rest your knee and the space is badly packaged, so the boot is really disappointing. 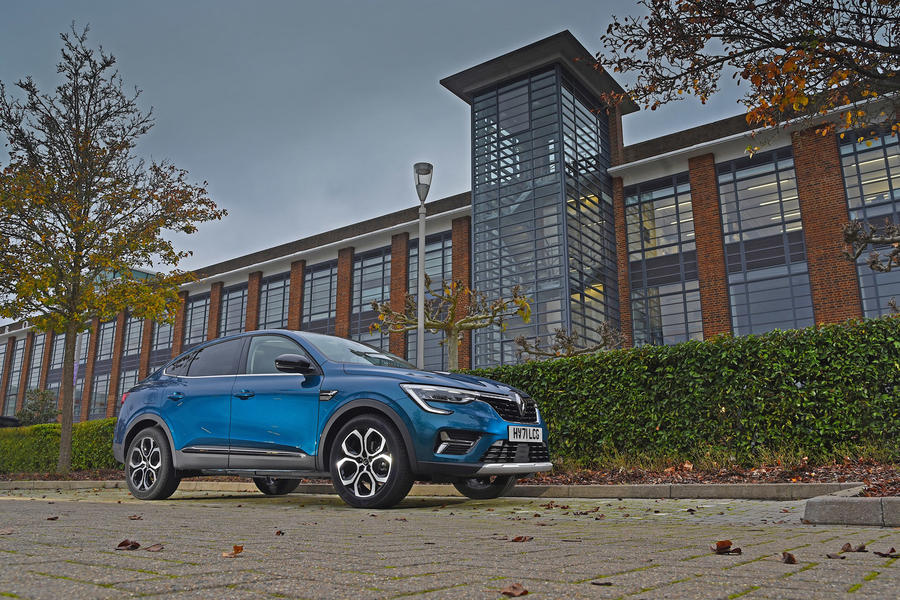