Renault India launched their 7-seater MPV Triber in the Indian market couple of years ago. Triber is currently India’s most affordable 7-seater MPV. It is based on the same platform as Kwid and Kiger and is a sub-4 meter MPV. Renault Triber has been doing pretty well in terms of sales and the same main reason behind that is the practicality. Another factor that attracted people towards it is the Global NCAP crash test rating. In the crash test, Triber achieved a 4 star rating making it a safe car. Renault refreshed Triber last year and now they have also released a new TVC for the MPV.

The video has been shared by Renault India on their YouTube channel. The TVC or the video shows how practical the Triber can be in our lives on a daily basis. It comes with a feature where the third row seats in the car can be fully removed from the car when not needed. This means it would generate more boot space. Renault has made some cosmetic changes to the Triber to make it look a lot more attractive or for a refreshed look.

Renault Triber now comes with a dual tone option. Renault also offered a new body colour with Triber. It is called Cedar Brown. The dual tone paint job is available with the RXZ variant. The ORVMs, roofs and the roof rails are all blacked out. The other updates include an LED turn indicator integrated with the ORVMs, steering mounted audio controls and phone controls from the RXT variant and the height-adjustable driver seat for the top-end RXZ variant. Renault has also updated the horn on this MPV.

Renault Triber is a good looking MPV in its segment. The design looks proportionate despite being a sub-4 meter car. Higher variants of the Triber is offered with features like projector headlamps, LED DRLs, push button Start/Stop, touchscreen infotainment screen, electrically adjustable ORVMs, power windows, digital LED instrument cluster and so on. 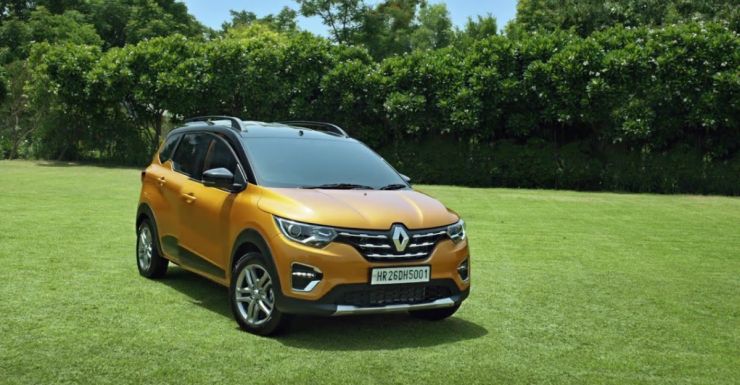 The Triber comes with a decent looking cabin. It has a design that is inspired from other Renault models. Triber is offer with features like ABS with EBD, dual airbags, speed alert warning, rear parking sensors and seat belt warnings. Higher variants also get Styled Flex Wheels, dual-tone dashboard with silver accents, 2 front tweeters, rear wiper and washer, rear defogger and two side airbags too for added safety.

Coming to the engine option, Renault is offering only one engine option with Triber. It is a 1.0 litre, three cylinder, naturally aspirated engine that we have seen on Kiger and Nissan Magnite as well. This engine generates 72 Ps and 96 Nm of peak torque. This engine is offered with a 5-speed manual and a 5-speed AMT gearbox option which Renault likes to call Easy-R gearbox.

Renault currently has Kwid, Kiger, Triber and Duster in its portfolio. The price for 2021 Renault Triber starts at Rs Rs. 5.69 lakh ex-showroom and goes up to Rs 8.25 lakh, ex-showroom. Triber is expected to get a 1.0, three cylinder, turbocharged engine this year.