We have seen several YouTube videos, where YouTubers do several experiments for their viewers. Most of these experiments are for entertainment purpose and for many these won’t make any sense as well. We have showcased some of these experiments by vloggers and YouTuber on our website. Here we have one such video where a YouTuber replaced the regular wheels on an ATV with metal spikes welded on to metal rims. Was the experiment a success? Let’s check the video to find out.

The video has been uploaded by MR. INDIAN HACKER on their YouTube channel. In this video vlogger shows an ATV that he bought for this experiment. He has been using it inside his property and then came up with the idea to install metal wheels with spikes on them. The video does not show how he managed to weld all the metal spikes on to the steel rims. The original wheels and tyres on the ATV where not modified for this experiment.

He mentioned that it took them two days finish welding all the metal spikes on to the steel rims. Vlogger and his friend get on to the ATV and drive it off their property to an open ground to check whether their experiment was a success or not. The vlogger drives the ATV to an interior road where there were vehicles on the road and was surrounded by farm land.

Vlogger and his friends start removing the wheels one by one and replace it with the custom made steel rims with metal spikes on them. As this was a job done by the vloggers and his friends, not all spikes are placed evenly. After replacing the wheels, the metal foot board on the ATV was also replaced as it getting in the way of the new wheels when the ATV was moving. This was actually dangerous as one hit from the metal spikes can easily damage the rider. 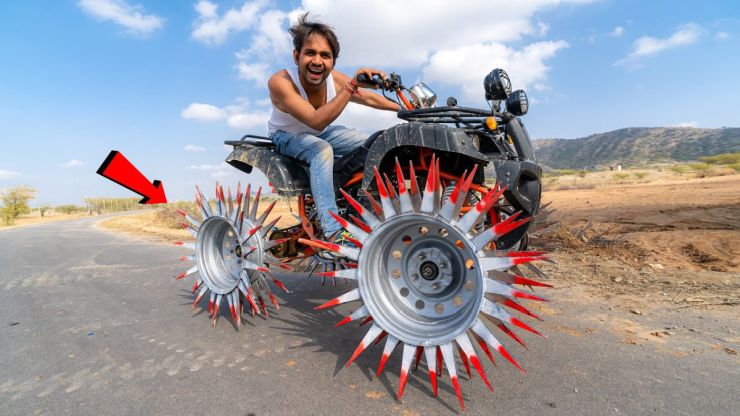 The vlogger sits on the ATV after replacing the wheels and starts the ATV. Initially the vlogger was driving it on the tarmac and the experiment seemed to be working. The metal spikes on the wheels however where leaving impressions on the tarmac. The metal spikes were sharp enough to damage the road if not careful. The vlogger then entered a farm and then started driving it inside the farm. The ATV was working fine but, the vlogger can be heard saying in the video that the engine had to put a lot more effort to make the vehicle move as it was heavier.

He also mentioned that the handling has also been affected badly and the ATV does not steer to the direction that he wants it to go. He also had to make sure that his legs do not come in the way of the metal spikes. Vlogger and his friends were having fun and one of his friend is also seen driving the ATV. He managed to break one of the metal spikes on the front wheel but, the ATV was still working without any problem. This was a fun experiment and we do not recommend anyone doing such things at home.

The post Replacing an ATV’s tyres with metal spikes: Will it work? [Video] first appeared on Cartoq.Cartoq Read More