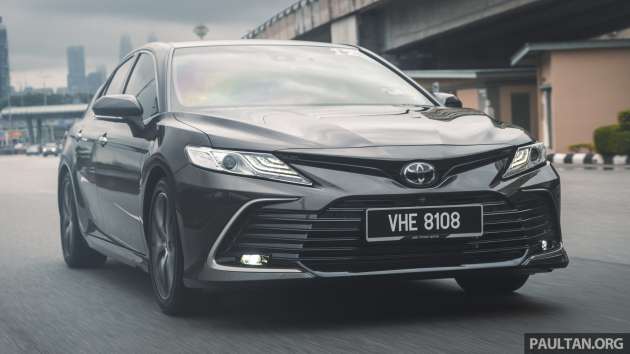 Have you ever wondered what the “D” in D-segment sedan is short for (in case you’re sniggering already, I’m not referring to that)? It doesn’t actually mean anything, but it might as well stand for “dinosaur”. Used to be that this class of car was teaming with competitors, all vying for the same customer – some higher-up at a faceless corporation looking for a new vehicle to be shuttled to their endless meetings in.

But then the humble four-door body style fell out of favour, as SUVs became more and more popular and the larger ones moved further and further upmarket. It didn’t help that the sedans were pricing themselves out of the company car bracket (following in the footsteps of the third-generation Mazda 6, which broke the glass ceiling for what these things were expected to cost), so much so that even the cheapest model nowadays is north of RM170,000. The range-topping variants? Those are deep in premium territory.

It’s against this backdrop that the eighth-generation Toyota Camry was launched in Malaysia in late 2018. Unable to trade on price alone, it was extensively remodelled with an attention-grabbing design and an all-new platform that mostly delivered on the promises made in the name of driving dynamics. But the car itself wasn’t all new, as us Malaysians lost out on the wholesale powertrain revamp that the rest of the world got.

That injustice was righted with the facelift, which was introduced tonight. The Camry finally gets the new engine and gearbox it should’ve had in the beginning, but do these much-vaunted bits – and several other minor updates – make it a better car? We get a chance to sample the car on a drive to Kuantan and back. 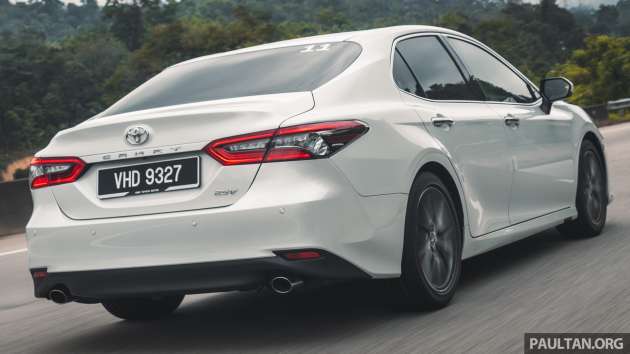 Still imported from Thailand and priced to match

Despite UMW Toyota Motor’s Bukit Raja plant now being capable of assembling Toyota New Global Architecture (TNGA) models like the Corolla Cross, the XV70 Camry continues to be fully imported from Thailand. That means there’s no price drop to be had here, nor a CKD locally-assembled hybrid model to take advantage of existing import and excise duty incentives.

As such, there’s still only one variant available – the full-spec 2.5V. There’s no cut-price model to compete against the base Honda Accord, but at least you do get what you pay for – and plenty more besides, as you’ll find out soon enough.

Sharp looks remain, but ever so slightly refined

Not that you’ll be able to tell just from looking from it, as the Camry still looks resolutely familiar. That’s not to say that it’s boring, as the “Beautiful Monster” still looks sharp more than three years on, what with its aggressive face and shapely body.

The changes have managed to soften the front end somewhat. The large lower grille no longer spans the full width of the bumper, as the centre air intake portion is more clearly defined, making the fascia look less like a massive Gillette razor. Mind you, the “wide mouth” appearance is still there, as the black slats run right into the bumper corners (now bookended by grey C-shaped frames) – a shrinking violet this is not.

The overall aesthetic is smoother, more refined, especially with fewer creases around the upper grille. But the Camry is still an angry-looking car, as if annoyed by comments about how boring the previous-generation XV50 was. Completing the mild exterior makeover are the smoked taillight internals and a new design for the 18-inch alloy wheels, replete with a machined two-tone finish.

Plush cabin gets welcome refinements, especially at the back

Inside, the Camry takes after newer models like the RAV4 by adopting a freestanding infotainment touchscreen that sits atop the dashboard. This pushes the air vents downwards, placing them just above the air-conditioning controls, although a blanking plate makes it very obvious where the old blowers were. Still, the change is worth it as it puts the display right up in your line of sight and closer to your left hand.

Mercifully, UMW Toyota has retained the easy-to-use OEM system (not always a given even at a much higher price range, as the aftermarket head unit in the GR Yaris painfully shows) and even went through the trouble of specifying a larger nine-inch touchscreen and Apple CarPlay and Android Auto connectivity. A nine-speaker JBL sound system continues to be fitted as standard here.

Not much else has changed at the front. The spacious, solidly-built cabin continues to offer plenty of soft-touch plastics, vaguely wood-like trim (now black instead of brown) and plush power-adjustable front seats with driver’s side memory, upholstered in black leather with a brown centre strip. 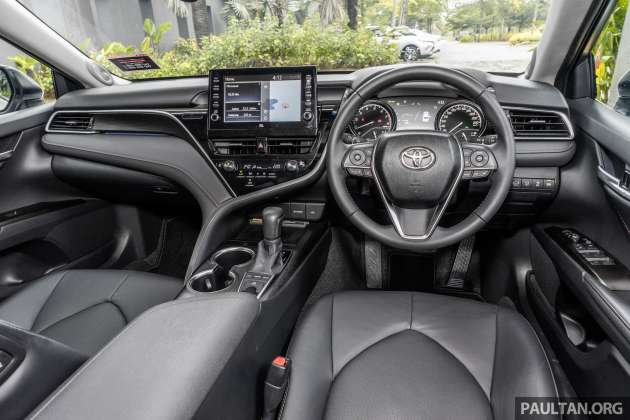 The driving position remains top-notch here – you sit surprisingly low in this unclemobile, landing your feet on perfectly-placed pedals and bringing the steering wheel close to your chest, just like in a race car. It’s both supremely comfortable and resolutely driver-focused.

But it’s at the back where the new Camry does its best impression of a luxury car, because the facelift adds power-reclining seats and a separate climate control zone. These, along with the powered rear sunshade and even the audio controls for the entire car, can be adjusted using a new touch-sensitive panel that is slightly fiddly to use but gives the car an upscale feel unmatched in this price range.

The Camry has always been the ideal chauffeur-driven car on a budget with its trademark front passenger seat shoulder switches and collapsible headrest, but it’s now in a different league entirely. You also get acres of legroom and you won’t notice the low-slung roof so much with the back seats reclined. The boot still measures 493 litres despite a switch from a full-sized spare tyre to a space saver, and you still can’t fold the seats (especially now that they are powered) or open the bootlid hands-free.

Safety-wise, the Camry has been upgraded to the latest Toyota Safety Sense 2.5 suite of driver assistance systems, adding several new features. The car’s autonomous emergency braking function gets nighttime pedestrian and daytime cyclist detection, while the adaptive cruise control can slow down for corners and speed up in anticipation of an overtaking manoeuvre when an indicator is switched on.

This goes hand-in-hand with the new lane centring assist, which keeps the car in the middle of its own lane. This semi-autonomous driving capability has effectively been lifted from the also-facelifted Lexus ES 250 and works very well in the real world, taking up almost all of the heavy lifting of acceleration and steering on the highway. An auto brake function for the rear cross traffic alert and an Intelligent Clearance Sonar (ICS, Toyota’s version of Perodua’s Pedal Misoperation Control) round off the safety improvements.

We’ve been waiting years for this

Right, on to the main event, the new engine. Yes, Toyota has finally slotted the latest Dynamic Force mill into the Malaysian-market Camry, the latter having soldiered on with the same 2AR-FE 2.5 litre naturally-aspirated four-cylinder since the beginning of the seventh-generation XV50‘s lifecycle in 2012. With this, the car is now bang up to date with the rest of the world, equipped with the latest powertrain technologies.

The latest A25A-FKS unit, also found in the RAV4 and the Lexus ES 250, employs D-4S direct injection, electric variable valve timing (VVT-iE) and a redesigned cylinder head for improved tumble flow. With a compression ratio of 13:1, it delivers a thermal efficiency of 40%.

All in all, the engine produces 209 PS at 6,600 rpm and 253 Nm of torque at 5,000 rpm, representing increases of 25 PS and 18 Nm over the outgoing unit. It is mated to a new Direct Shift eight-speed automatic gearbox, which comes with a wider spread of ratios and a lockup clutch for a more direct driving feel and greater efficiency, all while being more compact than the old six-speeder. 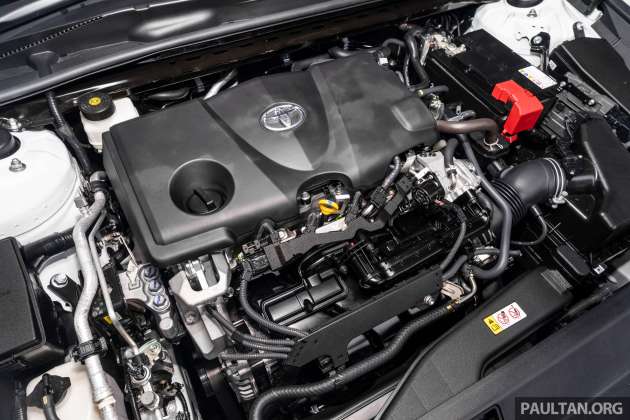 The numbers sound impressive – that’s almost as much power as you get in a Volkswagen Golf GTI, for example. But a Golf GTI is also turbocharged and the Camry isn’t, so don’t expect hot hatch performance here. What you should expect in this segment is smooth, predictable power, which this car delivers in spades.

Start it up and the engine settles into a surprisingly deep idle, giving it a bit of an old-school luxury car vibe. As you’d expect, the Toyota isn’t especially exuberant at low revs relative to its force-induced rivals, so you’ll have to work the motor a little harder to get up to speed. But it’s so revvy and free of vibration that it never feels like a chore – unless you mash the accelerator and hear the four-pot strain.

Don’t do that; just flex your right foot instead. Torque builds gradually until you are thrust well past the speed limit – a gentle ocean wave rather than a tsunami. It’s ably matched by a slushbox that is so seamless in its shifts it almost feels like a CVT, except for how quickly it responds to the throttle. There are paddle shifters for you to play with, but so relaxed and effortless is the powertrain that it borders on boorish to use them.

Serene progress is all but assured, thanks to the almost total lack of engine, road and wind noise – you’ll have to get up to very illegal speeds to hear anything other than a muted roar. Even with the pitter-patter of rain during our drive and the spray kicked up by the Bridgestone Turanza T005A tyres, the inside of the Camry remained hushed, letting me get my forty winks while reclined at the back. 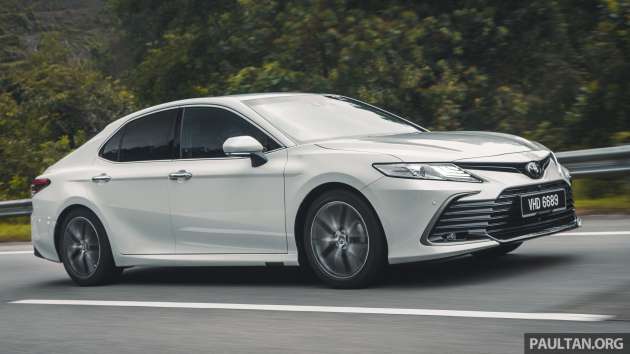 My sleep continued undisturbed thanks to a ride that filtered out most of the nasties on our roads. The Camry is very softly sprung, enabling it to effectively steamroll minor surface imperfections and float along gently at highway speeds, although it doesn’t provide quite as much isolation from larger bumps and potholes as I’d like. Still, the Toyota is more than comfortable enough for any towkay, as it always has been.

You might imagine that this softness will cause the Camry to roll about in the corners, and in a way it does. Point the car at a corner and it squats onto one side, but it does so in a controlled and natural manner without bouncing around. Body movements are always in sync with the steering, which is light but direct and accurate, helping this big sedan feel more agile and athletic than it has any right to be.

On a wet Karak Highway, the Camry was composed and surefooted, giving me the confidence to push on at speeds that would terrify a lesser vehicle. Put the quietly competent engine, gearbox and chassis together and what you end up with is a car that drives differently compared to any of its overtly sporty rivals at this price – less aggressive in its responses yet still engaging enough to carve up a good road. 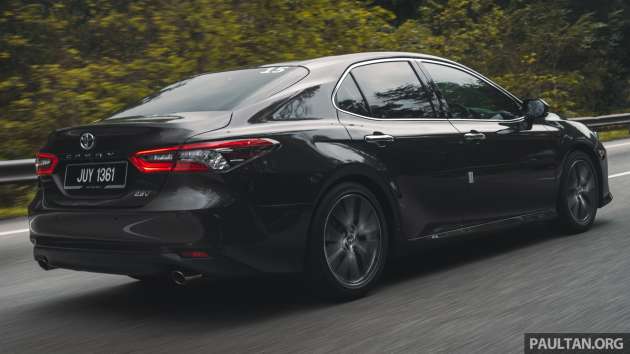 Despite all this, the Camry is no revelation, even though it has finally received its long-overdue powertrain change. Yes, it is a little more powerful than before, but its intrinsic character remains unchanged – it still offers up supreme comfort without boring you to death behind the wheel.

The continued lack of a turbo engine means that the Toyota isn’t going to win you any traffic light grands prix. But that doesn’t mean it’s slow, although the NA mill does give it an anachronistic driving experience in concert with the soft suspension. There’s some newfound verve here, but its primary goal is still to serve as a sensory deprivation tank for the reasonably well-to-do.

This, then, is a D-segment sedan like they used to make them, a window into a parallel universe in which sporty European rivals like the Volkswagen Passat and entry-level BMWs and Mercedes-Benzes never existed. Forget the angry styling – if you want something that will soothe and cosset you on every journey, nothing else even remotely in the price range comes close.

The facelifted 2022 Toyota Camry is now on sale in Malaysia. Browse full specifications and equipment on CarBase.my.