The video has been uploaded by Cooperb Motorcycles on their YouTube channel. The Interlayan 650 is actually a custom build project in which the vlogger used an Interceptor 650 motorcycle as donor bike. Cooperb motorcycles have done several custom motorcycle projects in the past and the Interlayan 650 is their latest one. The vlogger can be heard saying in the video that the bike started its life as a standard Interceptor 650 motorcycle and as part of the build several modifications were made. 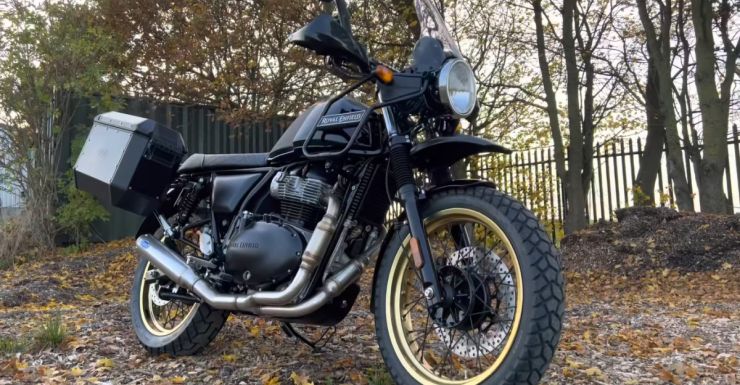 The engine cover and the surrounding area which is normally finished in chrome has been painted in matte black. No changes have been made to the engine of the motorcycle. The stock twin exhaust has been replaced for a single upswept aftermarket unit. Towards the rear, the motorcycle gets two side boxes and the rear gets tail lamps and turn indicators from a Royal Enfield Himalayan.

Overall, the motorcycle does look very neat and may be Royal Enfield could take some inspiration from this custom build motorcycle and actually launch a 650-cc, adventure tourer motorcycle in the market. The manufacturer is currently working on a 650-cc cruiser, Himalayan based scrambler and many more products.