Skoda has finally launched Slavia in the Indian market. The new sedan is offered in two petrol engine options. There is a 1.0-litre TSI and a 1.5-litre TSI. Here, we have a video in which we can see both versions go against each other.

Also read: Suzuki Ertiga Sport FF: This is IT! 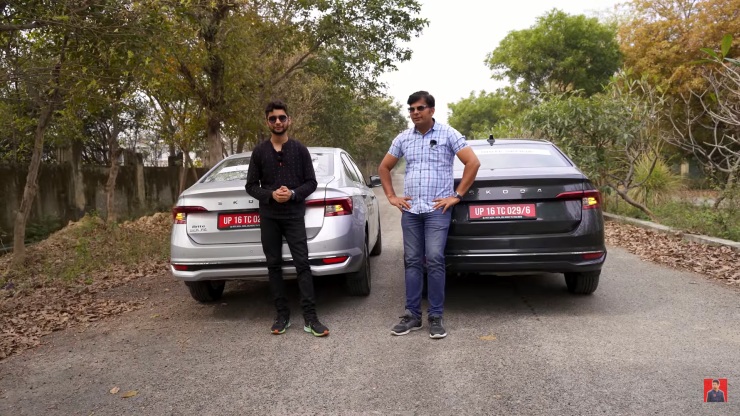 The engines and gearboxes are the same as the Skoda Kushaq, Volkswagen Taigun and the upcoming Volkswagen Taigun. The platform is also shared with these three vehicles. It is called the MQB-A0-IN platform. Because of the platform, all four vehicles have an identical wheelbase of 2,651 mm.

The first drag race is won by the 1.0 TSI quite easily. The results stay the same for the second drag race also. The reason behind this is that the 1.5 TSI has a bit of turbo-lag because of which it takes a second to respond. Moreover, there is a chance that Skoda might have tuned the gearbox to behave a bit leniently to conserve its longevity and protect the gearbox.

Then both the driver swaps the cars. In the third race also, the 1.0-litre takes the lead and wins the race.  In the fourth race, the driver of the 1.5 TSI is able to beat the 1.0-litre. He achieved this by not pressing the accelerator and brake pedal fully. The fifth race is also won by the 1.5 TSI by using the same technique. Then the drivers swap places once again. The sixth race is won by the 1.0 TSI because the other driver did not know the technique to launch the 1.5 TSI.

The Slavia is offered in three variants. There is Active, Ambition and Style. The 1.5 TSI is offered only with the Style variant which is the t0p-end variant. The prices of the Slavia starts at Rs. 10.69 lakhs ex-showroom and goes up to Rs. 17.79 lakhs ex-showroom. It competes against Maruti Suzuki Ciaz, Volkswagen Vento, Honda City, Hyundai Verna and the upcoming Volkswagen Virtus.