Skoda launched the all-new Slavia sedan in the market recently. It is the second product from Skoda under the India 2.0 Strategy. Skoda Kushaq was the first product under this new program. We drove the all-new Slavia in Goa last week and a detailed review of the same is available on our website and YouTube channel as well. If you want to check out more about the all-new Slavia, click here. Skoda has officially announced the prices for Slavia. Prices for Slavia now start at Rs 10.59 lakh, ex-showroom and goes all the way up to Rs 17.79 lakh, ex-showroom. Skoda has also launched a new TVC for Slavia.

The TVC has been shared on to Skoda Auto India’s official YouTube channel. The new Skoda Slavia is build MQB A0 IN platform which is also used in Skoda Kushaq and Volkswagen Taigun. Skoda Slavia replaced Rapid in the mid-size sedan segment and competes with cars like Honda City, Hyundai Verna and Maruti Ciaz. The car gets Skoda’s signature butterfly grille at the front with chrome outlines.

There are all LED crystalline projector headlamps and integrated LED DRLs in it. The sleek headlamps and wide grille at the front give Slavia a premium look. Skoda Slavia is the widest, longest and tallest sedan in the segment. Coming to the side profile, the car has 179 mm of ground clearance which is again highest in the segment. The higher variants get 16 inch dual tone alloy wheels which looks extremely good on the car. At the rear, the sloping roof meets the sharp looking boot with Skoda and Slavia branding on it. The split tail lamps are all LED units. 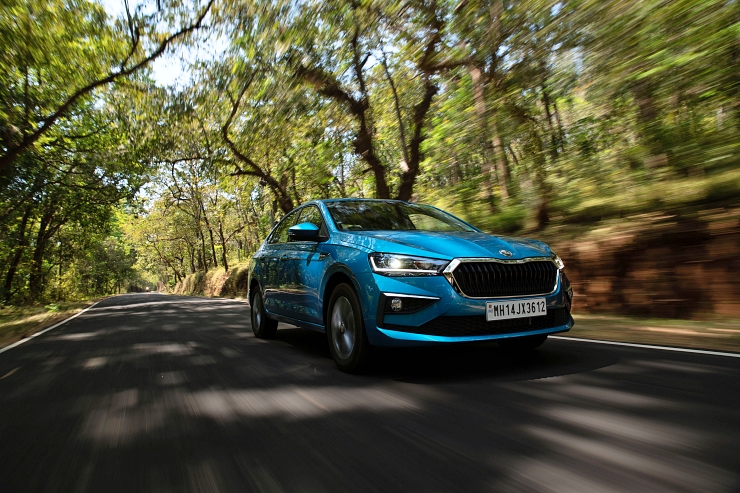 Skoda offers Slavia with two engine options. There is a 1.0 litre turbo petrol engine and a 1.5 litre turbo petrol engine. The 1.0 litre engine generates 115 Ps and 178 Nm of peak torque. It is available with a 6-speed manual and a 6-speed automatic transmission. The 1.5 litre turbo petrol engine generates 150 Ps and 250 Nm of peak torque. This engine gets a 6-speed manual and a 7-speed DSG transmission option. Just like how Skoda Slavia replaced Rapid, Volkswagen is also working on another sedan that is likely to replace Vento in the market. The upcoming sedan from Volkswagen will be called Virtus and the same has been spotted testing several times. Volkswagen will be unveiling the Virtus sedan later this week. The sedan will share several bits with its Skoda counterpart. Volkswagen Virtus is also based on the same platform and will also be powered by a 1.0 litre TSI and 1.5 TSI petrol engines.