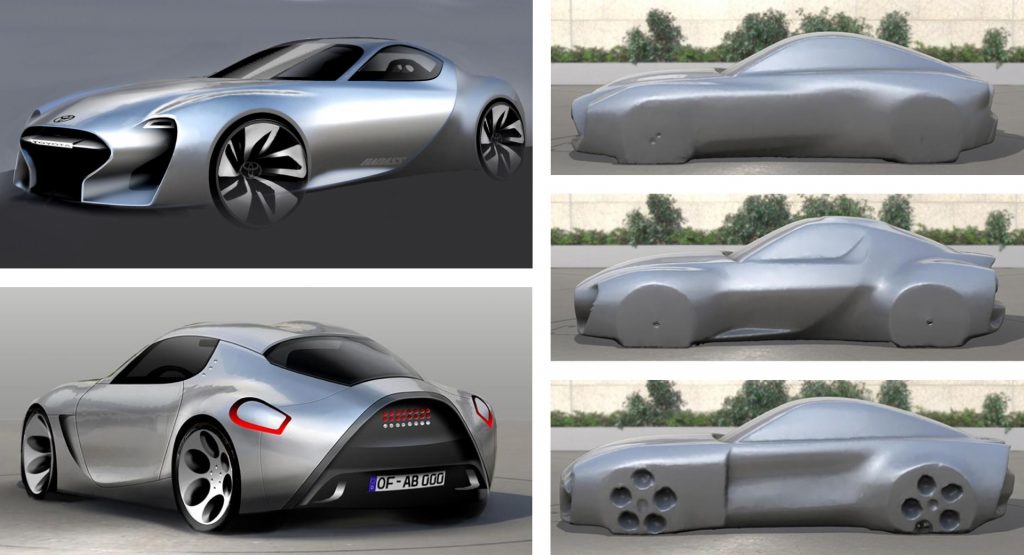 Toyota has shared with us a collection of early sketches and clay models from the GR Supra development shedding some light in the lengthy process of designing a sportscar. The Japanese automaker also highlighted the work of skilled craftsmen behind the clay models who are still a very important part of the design despite the advancements in CAD drawings, 3D printers, and AI technology.

It doesn’t seem so long ago but the Toyota GR Supra debuted exactly three years ago at the 2019 Detroit Motor Show. This means that the sketches we are seeing today were created at least five years ago or even earlier than that, since they come from the initial stages of development. Of course, Toyota didn’t give us the full story but a selection of the designs that contributed to the final car.

See Also: Toyota Gets Our Attention With Non-Supra Based GR GT3 Coupe Concept

All the sportscars depicted in the sketches have the same wheelbase and front-engine, rear-wheel-drive proportions, since the decision to use the BMW Z4 underpinnings was included in the original brief. The surface treatment and the dynamic lines are pretty different from one to another, although if you look closely you will notice some features that eventually found their way into production.

For example, a few early sketches already integrate the wraparound greenhouse effect, while others explore the characteristic curves of the wide rear fenders, the numerous intakes, and the complex character lines on the profile. We also see some pretty interesting ideas that didn’t materialize like a double rear windscreen, high-mounted brake lights, duo-tone treatment for the bodywork, and heavily sculpted organic forms for the front end.

While some aspects of the Toyota GR Supra are polarizing, with fans asking for more common features with the previous generation, going through its development process somehow gives greater meaning to its overall design. At the same time, having access to alternative proposals for an existing production car creates a few “what if” moments. Since it is a collaborative effort, the final model could look quite different according to the decisions taken by head designers, project managers, and Toyota’s management. We have to admit though that the GR Supra is an amalgam of some of the best design ideas depicted in the aforementioned sketches.

After discovering the main themes through sketches, the next step in the design process is to translate the selected proposals into more accurate 3D CAD drawings. Digitalization is an amazing tool for designers and engineers, allowing them to quickly and efficiently test several of their designs on the computer screen or using virtual reality glasses.

However, as explained by clay modeling master Kazushi Eto, the physical model is crucial for the evaluation of a design since everything looks and feels different in the real world. His role is to reduce the distance between the 2D sketch and the 3D concept or production model by translating the designer’s ideas into a real-life sculpture. Thanks to that, the designers get feedback to improve the design while constantly evaluating it both aesthetically and also in terms of packaging and regulations. The final clay model is painted, while production parts including head- and taillights, wheels, and badges are incorporated for an ultra-realistic look.

The experienced clay modeller demonstrates his art in two short videos. In the first one, he quickly creates a scale model of the GR Supra focusing on the main surfaces that distinguish it from other sportscars while adding lines using a knife for extra dynamism. In the second video, he carefully reconstructs the curves of the rear fender based on an existing clay model that was intentionally damaged for demonstration purposes.

While the skilled clay modeler makes it look like an easy task, each move requires precision and is a result of a 27 year-long career in vehicle development. Using his bare hands and custom metal tools that he created to suit his personal style, Eto expresses the designer’s ideas in three dimensions transforming clay into a car. Thankfully for the new generation, Kazushi Eto, who has the Chief Expert title at Toyota, is now training the new generation of clay modelers in a series of seminars.