Tata Altroz has been doing fairly well in the Indian market. A few months back, Tata Motors launched the Dark Edition of the premium hatchback. Now, a new colour named Opal Blue has been spotted at a dealership yard.

The video is uploaded on YouTube by Atharva Dhuri. The video starts by showing the front of the Altroz that is finished in Opal Blue paint scheme. It is a very deep blue as compared to the current Harbour Blue that is reserved only for the iTurbo variant. The Altroz that we see in the video is the XZ Plus variant which is the top-end variant of the Altroz.

There are no changes to the feature list or to the engines. It still comes with projector halogen headlamps, LED Daytime Running Lamps integrated with the fog lamps, fender-mounted turn indicators, and outside mirrors finished in piano black. The roof is also finished in a black shade. The alloy wheels measure 16-inches in size and are diamond-cut units. 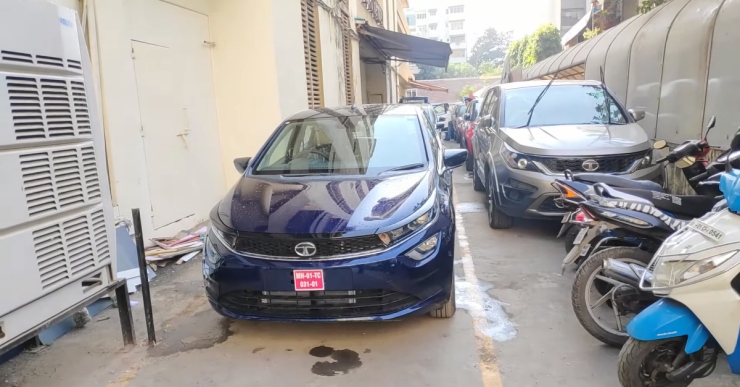 The interior is in a dual-tone finish of black and grey. There is a floating touchscreen infotainment system that comes with Android Auto and Apple CarPlay. The speakers are sourced from JBL. There is also a TFT screen for the instrument cluster with an analogue speedometer.

In the video, we can also see the mood lighting which is blue coloured.  There is a cooled glovebox, flat-bottom multi-function steering wheel, umbrella holders in the front doors, voice commands, iRA connected car technology, cruise control, wearable key, push button to start/stop the engine, keyless entry and much more.

On the higher variants, you get Brake Sway Control, rear parking camera with dynamic guidelines, automatic headlamps, rain-sensing wipers, voice alerts, fog lamps with cornering functions, rear fog lamps and an anti-glare IRVM. Moreover, the Altroz is the only premium hatchback in the segment that has a 5-star crash test rating by the Global NCAP crash test. There have been several instances where the Altroz has been able to keep its occupants safe in an accident.

Tata Altroz competes against the Honda Jazz, Maruti Suzuki Baleno,  Toyota Glanza, Volkswagen Polo and Hyundai i20. The prices of Altroz starts from Rs. 5.99 lakhs ex-showroom and goes up to Rs. 9.69 lakhs ex-showroom.