Tata Harrier is one of the popular mid size SUVs in the market. It has been present in the market for the last couple of years and it turned out to be successful product for Tata Motors. Toyota has been selling their popular SUV Fortuner in India for years and it is also the best selling SUV in the segment. It used to compete with Ford Endeavour but, unfortunately, Ford has exited the Indian market. Both Harrier and Toyota Fortuner belong to two different segment. Here we have a video where Toyota Fortuner and Tata Harrier are seen competing against each other in a drag race.

The video has been uploaded by IT’S ME AHLAWAT on their YouTube channel. In this video, the vlogger starts by talking about the engine and transmission on both the SUVs. Both the SUVs seen here are 2WD diesel automatic. Fortuner is available in 4×4 version as well. The Tata Harrier is powered by a 2.0 litre turbocharged diesel engine that generates 170 Ps or 168 Bhp and 350 Nm of peak torque. The SUV is available with a 6-speed manual and a 6-speed torque converter automatic transmission.

Toyota Fortuner seen here is powered by a 2.8 litre turbo diesel engine. This is the pre-facelift version so this generates 174 Bhp and 450 Nm of peak torque. Fortuner is also available with manual and automatic transmission options. Tata Harrier seen here is fairly new SUV when compared to Toyota Fortuner. Both the SUVs were lined up for the race and both vehicles had occupants in it as well.

In first round, the Harrier was in the Eco mode and the Fortuner was also using the Eco mode. Race started and the Harrier could not get a good start. Vlogger who was driving the Toyota Fortuner took advantage and took the lead. The distance between both the SUVs kept on increasing. Tata Safari could not make much of difference as the difference was too much. Toyota Fortuner was declared the winner. 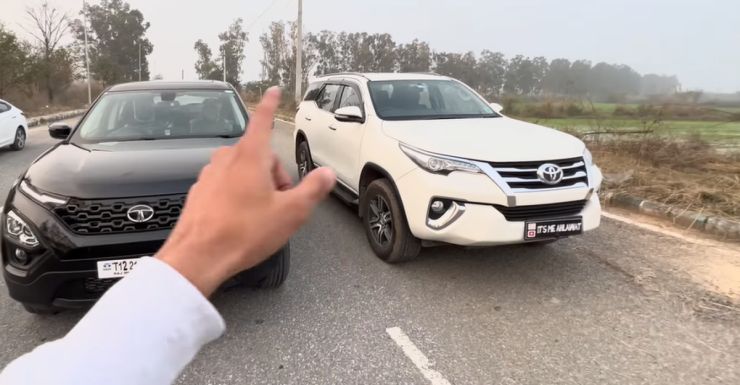 Vlogger then takes the SUV back to the start position and lines up the cars for second round. In this round, Tata Harrier was in Sport mode and Power mode was engaged in Fortuner as well. The race started and in this round, Tata Harrier driver managed to get a decent launch. The car was still behind the Fortuner. It was trying hard but, at no point could it actually overtake the Fortuner.

Toyota Fortuner was declared the winner in the second round as well. In third round, driver in the Harrier was changed. The owner of the Harrier can be heard saying that the car does not want to be pushed as it is a new car and he is not that great at launching as well. His other friend takes over the steering in Harrier and in the third round, Harrier gave Fortuner a tough competition. The Harrier did not win this time either but, it was right next to the Fortuner. Toyota Fortuner won third round as well.

Toyota Fortuner is heavier when compared to Harrier. Even that did not help Harrier in the race as Toyota Fortuner was producing 100 Nm more and 6 Bhp more than the Harrier. Driver’s experience and age of the vehicle also matters in this race.