Tata launched Safari in the market last year. It became a popular choice among buyers in a short span of time. Tata also updated the features in the Safari last year and also launched Gold Editions. Just like Harrier, Nexon and Altroz, Tata launched Dark Edition of Safari in the market. The SUV competes with cars like Hyundai Alcazar, MG Hector Plus, Mahindra XUV700 and upcoming Kia Carens. The starting price for Dark Edition of Tata Safari is Rs 19.05 lakh. The cars has already started reaching dealerships and bookings are also open. Here we have a detailed walkaround video of top-end XZ+ Tata Safari Dark Edition.

The video is uploaded by Got Speed on their YouTube channel. The video starts with the exterior and then shows the interior. In comparison to the regular Tata Safari, the Dark Edition version looks a lot more muscular and imposing. The main reason behind that is because of the chrome deletes. The chrome inserts on the front grille with tri-arrow designs have been completely blacked out. The whole car gets black paint job which looks good on the car.

There are not many changes to the rear of the car. Safari badging can be seen on the tail gate and there is Tata logo as well. The bumper, lower skid plate and every other elements in finished in black. The tail lamps are the same as regular versions. The interiors on the Dark Edition are also dark. In the standard version, it gets a white coloured leather upholstery. This has been changed to go with the overall look of the car. The seats are all wrapped in black coloured upholstery with tri-arrow design elements in it. 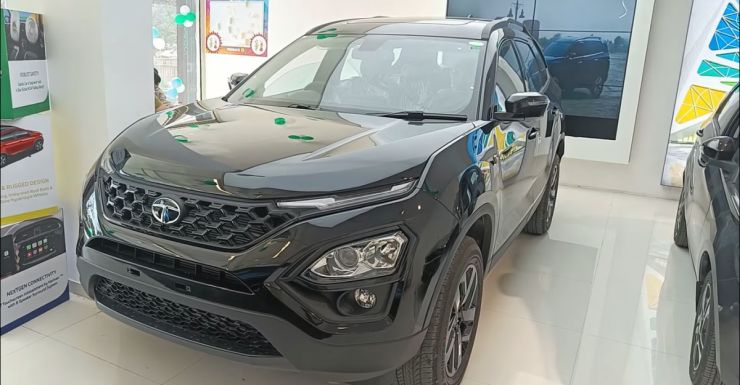 The third row offers 2 USB ports, AC air flow regulator and cup holders. The space is not apt for adults and is best suited for children as usual. The door pads are also wrapped in leather with tri-arrow inserts. The Dark Edition is available in both 6 and 7 seater options and the one seen here is the 7-seater variant. The top-end variant offers features like ventilated seats, electrically adjustable driver seat, auto-dimming IRVM, multi-function steering wheel, semi-digital instrument cluster, touchscreen infotainment system that supports Apple CarPlay and Android Auto, electronic parking brake and many more features. Tata Safari is powered by the same 2.0 litre turbocharged diesel engine that also powers Tata Harrier and many other SUVs. The engine generates 170 Ps and 350 Nm of peak torque. It is available with both 6-speed manual and a 6-speed automatic transmission option.