Tata launched Safari SUV in the market last year and it became a popular choice among 7-seater SUV buyers. Over the last one year, Tata launched several new editions of Safari and other Tata models to make it more appealing to buyers. Tata launched Gold Edition, Adventure Persona Edition, Dark Edition and they recently launched Kaziranga Edition. The Kaziranga Edition is inspired by India’s rich flora and fauna. The Kaziranga edition is available with Tata Punch, Nexon, Harrier and Safari SUVs. The cars have already started reaching dealerships and here we have a detailed walkaround video of Tata Safari Kaziranga edition.

The video has been uploaded by MotorWorld Rishabh on their YouTube channel. In this video, vlogger shows how Safari Kaziranga edition is different from regular other editions. Starting with the exterior, the first thing that one would notice in this SUV is the paint job. The Safari gets Grassland Beige shade with piano black roof. All the chrome elements on the regular version of Safari has been blacked out. Starting with the front, the Safari gets the same design and features like dual-function LED DRLs, projector headlamps, fog lamps and so on.

On the front grille, the chrome finished tri-arrow elements have been blacked out and the chrome garnish around the DRLs and headlamps also get similar treatment. The lower part of the bumper gets dark grey coloured skid plate. Coming to the side profile, there is black coloured Rhino mascot on the fender and the SUV rides on 18 inch alloy wheels. There are no chrome lower window garnish and roof rails which goes well with the overall theme of the car. The car continues to get LED tail lamps and black Safari  branding on tailgate. 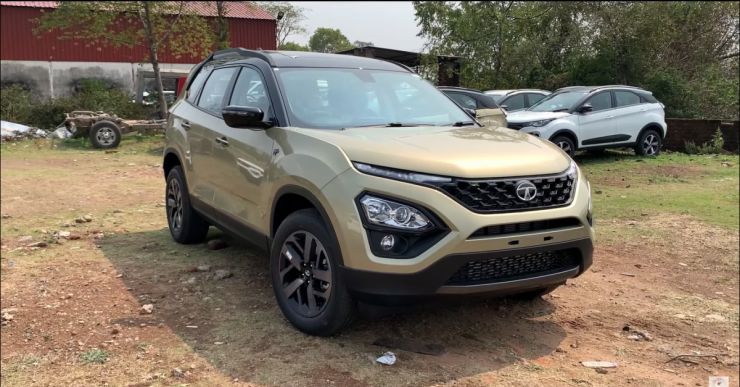 Moving in, the interior theme on this edition has been changed. There are wooden panel inserts on the dashboard and the seats are wrapped in a shade of brown and black dual tone leather upholstery. In terms of features, Tata had recently updated the Safari. The higher variants of the SUV now come with features like wireless phone charging, wireless Android Auto and Apple CarPlay, ventilated front seats and rear seats also get ventilation feature in the version with captain seats.

The one seen here in the video is a 7-seater version. There is no change in terms on layout and features. Other than this, the car offers a touchscreen, multi-function steering wheel, panoramic sunroof, cruise control, semi-digital instrument cluster, automatic climate control, auto-dimming IRVMs and many more features. Tata Safari is actually based on the same platform as Harrier but, is slightly longer and taller than its 5-seater sibling.

It is however powered by the same engine as Harrier. It uses a 2.0 litre turbocharged diesel engine that generates 170 Ps and 350 Nm of peak torque. The engine is offered with a 6-speed manual and a 6-speed automatic transmission option. Tata Safari Kaziranga edition is based on XZ+ and XZA+ variants of Safari and the prices for the same start at Rs 21 lakh, ex-showroom.