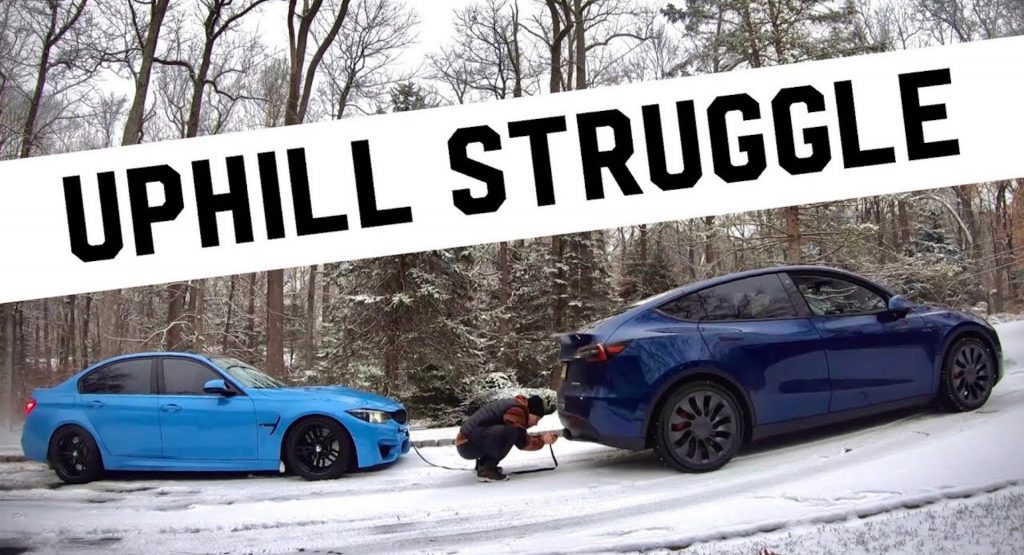 Rear-wheel drive, snow and all-season or summer tires is a menage-a-trois made in hell. Most of us have come across cars stranded in winter, mostly because they’re not equipped with the correct footwear.

Having years ago spent a couple of months driving a BMW 1M on winter tires and never once getting stuck in snow or icy conditions (they also happened to make it even more slideable in the dry) I know full well what a difference appropriate rubber makes to a powerful rear-drive M car.

But they don’t seem to offer much help to Tommy from YouTube channel Tommy L Garage. Winter tires have specially designed sipes (the grooves cut unto the blocks) that are shaped to void the grooves filling up with snow as happens on all-season tires, and the bespoke compound keeps the rubber supple at lower temperatures, improving handling and braking, as well as helping you actually pull away in the first place.

Although Tommy’s winter tire-equipped F80 M3 manages to get out of his driveway and up the fairly gentle slope to the street on virgin snow, when he reverses halfway back down the grade and attempts to pull away again, the M3 isn’t playing ball. Even with his 180-lb father in law sitting in the trunk to help improve traction, it’s still going nowhere.

Genuine studded snow tires, the kind of thing you routinely see on cars in northern Scandinavia, would have got it to the top in no time, but they’re not much fun when you get to the main road and find it’s been completely cleared of snow.

So it’s down to Tommy’s Tesla Model Y Performance to haul the M3 to safety. The Tesla is all-wheel drive, but AWD cars on all-season rubber can still struggle in winter conditions, despite both axles doing the driving. Incredibly though, not only does the all-season-shod Model Y glide up the driveway like it’s an 80-degree June day, it also performs the mid-level start the BMW couldn’t pull off, and even manages to tow the 3500-lbs M3 to the top of the hill.