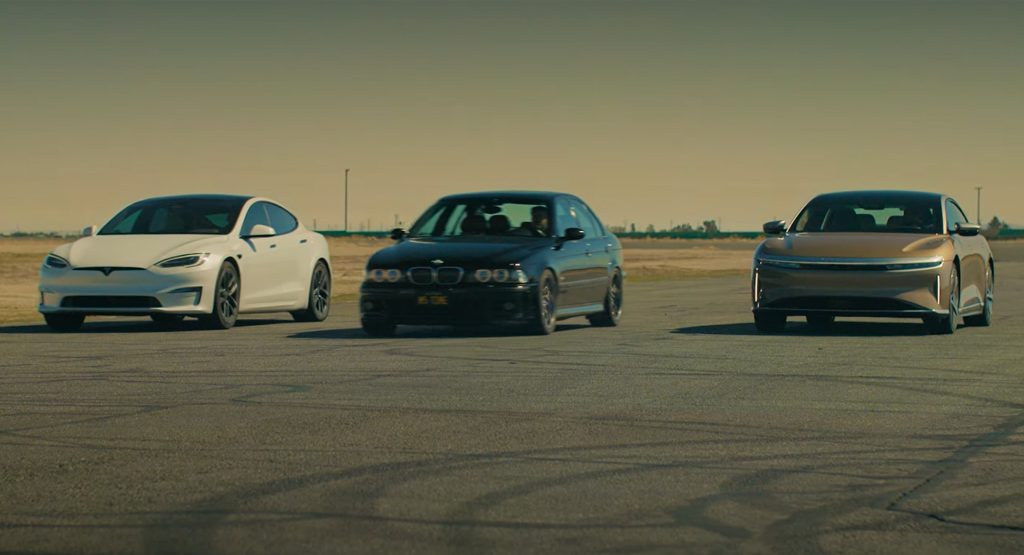 Twenty years ago, BMW’s E39 M5 was the fastest sedan on the planet. Fast forward to today, and electric cars are king. More specifically, the Tesla Model S Plaid and Lucid Air Dream Edition are arguably of the main contenders for the king of sedan speed. But just how far have we come in two decades? That’s what Hagerty and Jason Cammisa attempt to find out in their latest video as they pit the three against each other with a special twist.

You might be thinking that this is an unfair drag race, seeing as the two EVs have nearly triple the power of the M5, and you’d be right. To help even the playing field, they gave it an advantage: it was allowed to start from a 70 mph (113 km/h) roll while the other two had to start from a standstill.

Onto the actual drag race, the BMW makes its flyby, at which point the Tesla and the Lucid make their launches. At first, the BMW is comfortably ahead, but thanks to that instant electric torque, the other two begin to gain on it. In the end, it’s actually the Tesla that takes the win with the BMW right on its rear bumper, followed by the Lucid about two car lengths behind. That’s an incredibly impressive performance from both EVs, even the Lucid because of how close it came to the M5. However, Cammisa has one more test in mind.

Related: Rivian R1T Racing GMC Hummer EV Shows That The Age Of The Super-Truck Is Upon Us

We all know EVs are the king of acceleration when it comes to racing other cars, but how about facing off against gravity itself? For this test, they had a skydiver jump out of a plane at the same time the Lucid and Tesla launched to see which could cover a quarter mile faster. And as it turns out, both electric sedans are faster than gravity.

To watch the outcome of Hagerty’s challenges for yourself, you can check it out in the video below.