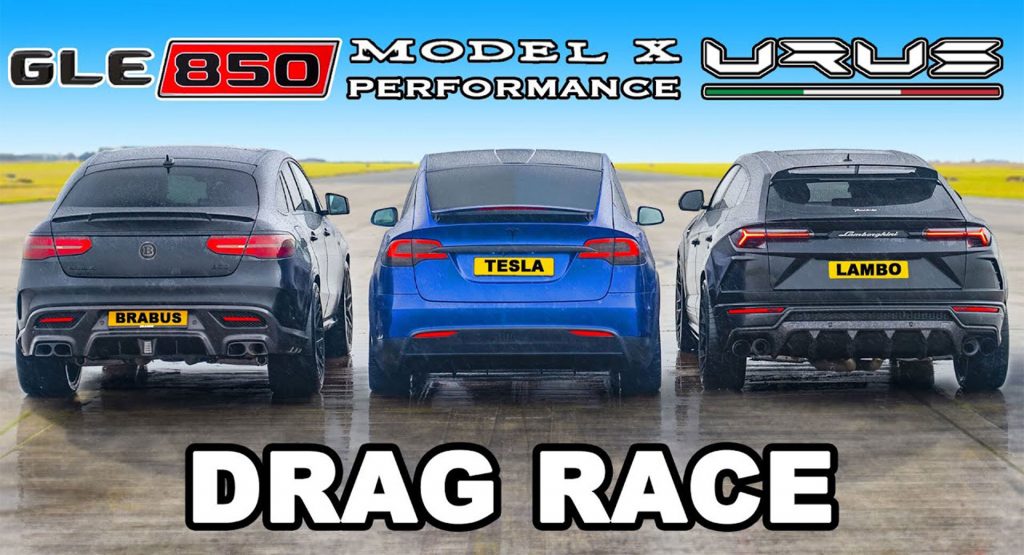 If you wanted to own an extraordinary quick SUV, would you take a Lamborghini Urus, a Tesla Model X Performance, or an 850 hp Mercedes-AMG GLE 63 tuned by Brabus?

CarWow recently pitted these three against each other for a series of performance tests to find out which was the quickest. The results may not shock you but they are entertaining nevertheless.

The first test was a drag race from a standing start, conducted in very wet conditions. Despite the less than ideal weather, the Model X Performance and Lamborghini Urus both rocketed off the line and got great starts, quickly leaving the Brabus-tuned Mercedes trailing well behind the other two.

Midway through the race, the Tesla holds on to a strong lead but the Lamborghini begins to close in. Ultimately, the Model X Performance crosses the quarter-mile mark in 11.9 seconds compared to the 12.0 seconds of the Urus. The Brabus 850 couldn’t do any better than 12.8 seconds.

A rolling drag race is then held between the trio. The Model X Performance is able to take a comfortable victory in this race thanks to the instantaneous torque that its two electric motors provide. The Brabus also performed quite well in this test and was able to quickly establish a lead over the Urus.

Last but not least is a braking test. The Tesla is the heaviest of the trio so this impacts its braking abilities but it was still able to stop faster than the Mercedes. It was the Urus that claimed an easy win, however, coming to a stop much quicker than the other two.