This is a custom built, twin engined Honda CB750 salt flat racer that was built by Boris “Bob” Guynes of Red Wood City, California for use on the Bonneville Salt Flats in Utah. For reasons that are perhaps obvious, he nicknamed it “The Anti-Christ.”

Guynes developed a one-off tubular steel duplex cradle frame for the bike, he also bolted both engines together for additional strength. The bike is now topped with a fuel tank from a smaller capacity Honda, and power is fed back through a linked primary drive the the rear gearbox, then to the rear wheel.

Land speed racing at the Bonneville Salt Flats has resulted in the creation of some of the fastest and most unusual vehicles in the world. The first land speed record was set in Bonneville in 1914 by Teddy Tetzlaff, he been followed by countless thousands of other would be record breakers in the 107 years since. 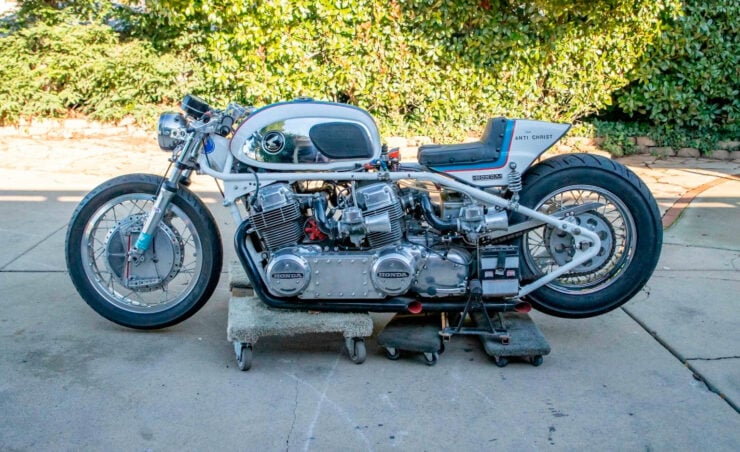 With its twin CB750 engines this bike would be producing approximately 136 bhp in stock tune, though it’s clear by looking at the engines that there’s nothing stock about them.

Bonneville has become so ingrained within automotive culture that a number of production vehicles have been named after it, including both the Pontiac Bonneville and the Triumph Bonneville.

There are three major events at the salt flats each year, Speed Week, World of Speed, and the World Finals – all of which see hotly contested land speed record attempts and typically a slew of new records.

Combining two or more engines to increase a vehicle’s speed is not a new idea, in fact it’s probably been around since shortly after the concept of motor racing first took hold.

The motorcycle you see here is an excellent example of the multi-engine concept, it features twin Honda CB750 engines, each of which is mounted transversely as originally designed, then linked together via their primary drives. 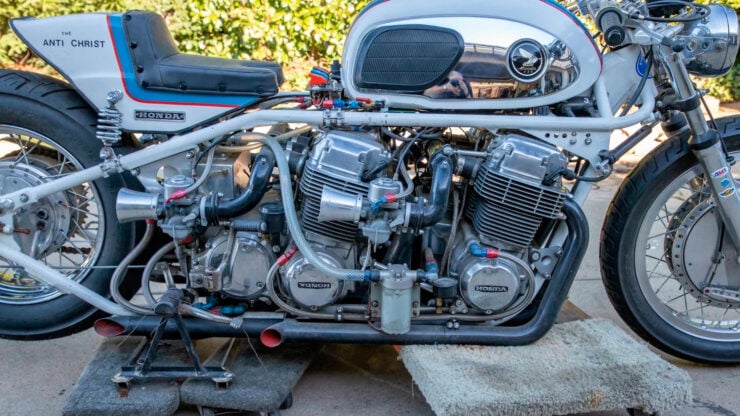 Rather than the standard four carburetors per engine of the stock bike, this one has two racing carburetors with velocity stacks and long tube induction manifolds – likely to reduce the distance between the engines.

The CB750 was first shown to the world in 1968, it became the world’s de facto superbike thanks to its advanced engineering, its reliable nature, and its 68 bhp output.

To complete with Honda, fellow Japanese motorcycle manufacturers Yamaha, Kawasaki, and Suzuki all developed their own inline-4 cylinder superbikes, resulting in the term “UJM” or “Universal Japanese Motorcycle” being coined to describe them all.

When Bob Guynes set out to build a salt flat racer he chose to use two CB750 engines linked together, this configuration would produce approximately 136 bhp if the engines were in a regular state of tune – but these have been modified relatively significantly.

A custom tubular steel duplex cradle frame was designed with telescopic forks up front and a hard tail rear end. A Honda 450 fuel tank (or similar) was then fitted and paired with a single seat that’s mounted to the frame with dual springs to keep things comfortable. 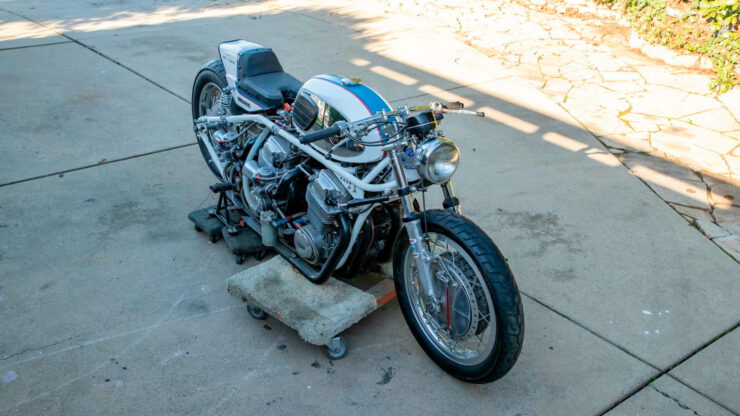 Braking is taken care of with drums front and back, and it’s clear that the motorcycle was designed to be as low as possible to reduce the frontal area for optimal aerodynamics.

The listings doesn’t indicate whether this bike was ever actually used at Bonneville, and interestingly it does have a headlight fitted – not many land speed record vehicles do.

Interestingly there is a list of dates and names on the rear cowl under the title “Bonneville Salt Flats,” perhaps hinting that this bike has indeed been used for land speed record attempts on a number of occasions.

If you’d like to read more about the Anti-Christ or register to bid on it you can click here to visit the listing on Mecum. It’s due to cross the auction block with them in late January at the Las Vegas Motorcycle Auction and there is no reserve. 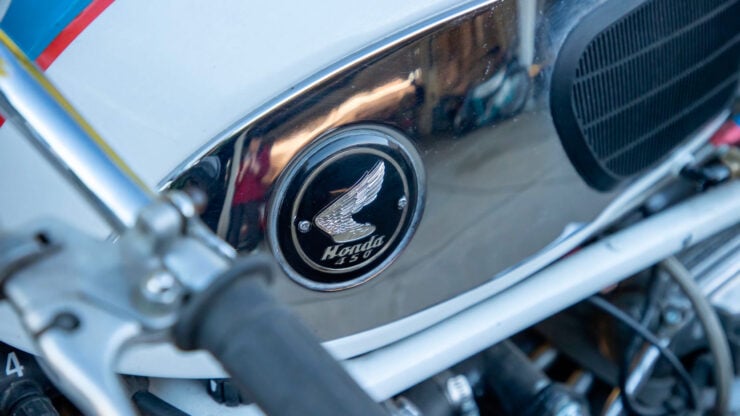 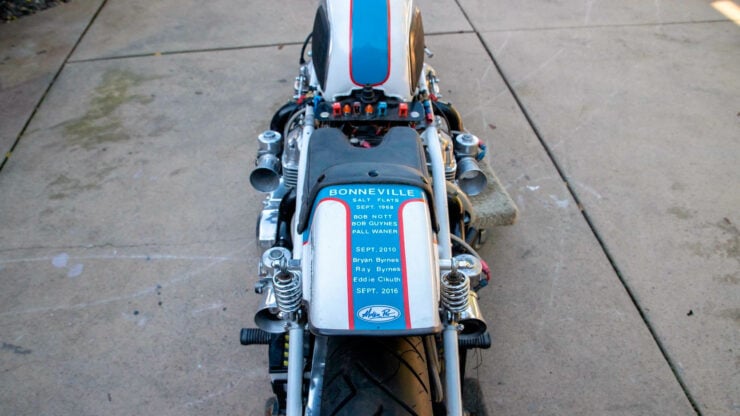 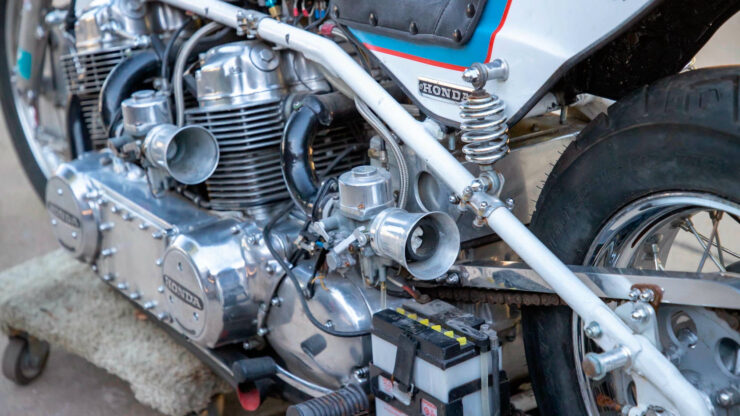 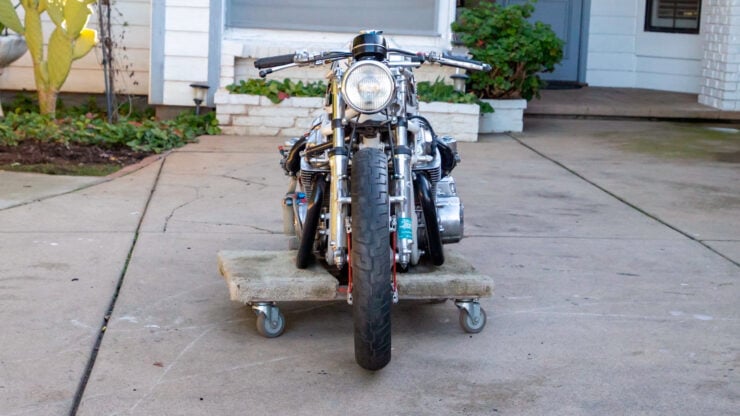 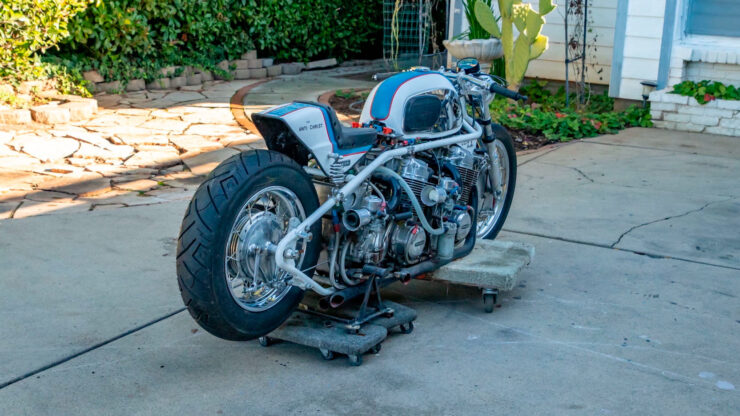 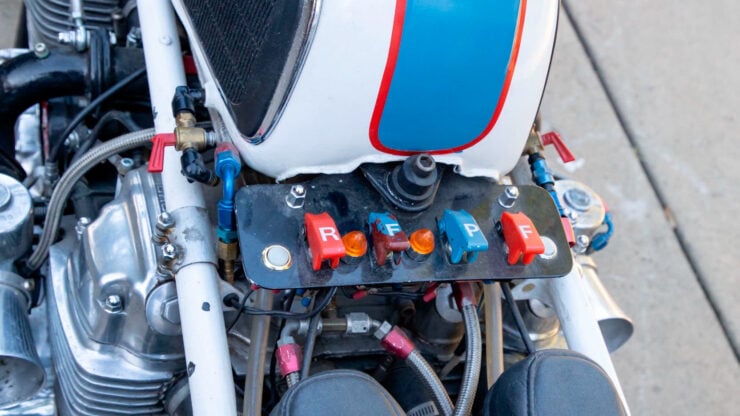 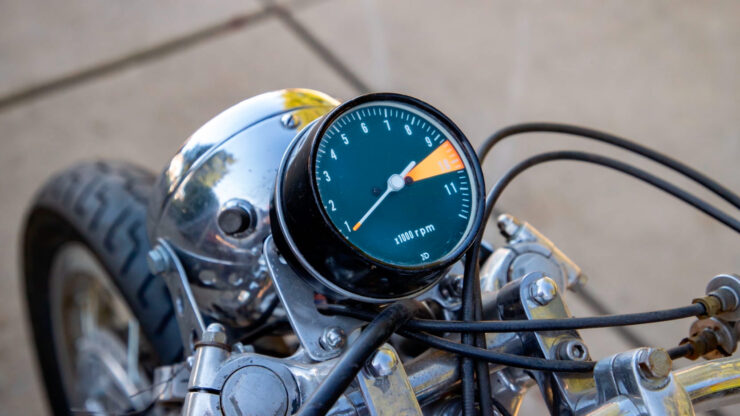 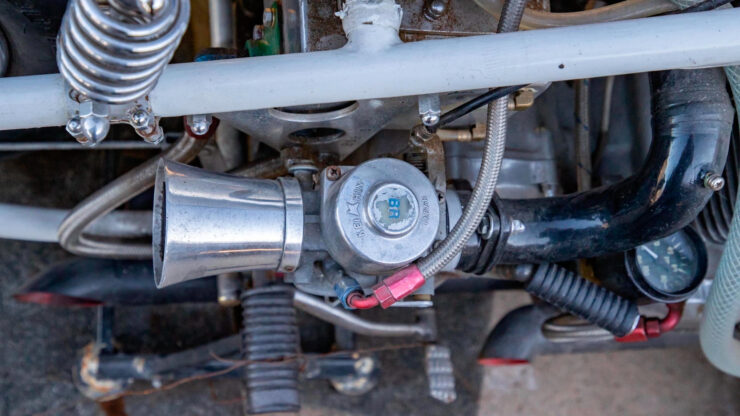 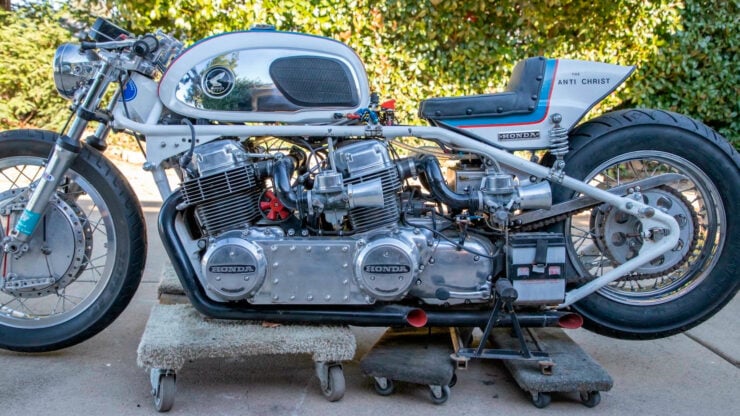 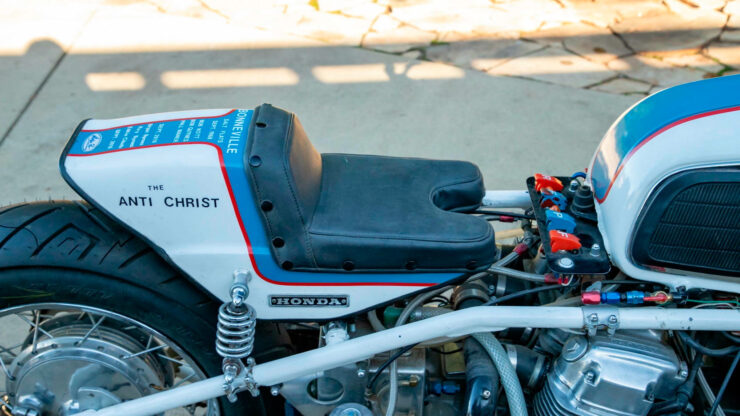 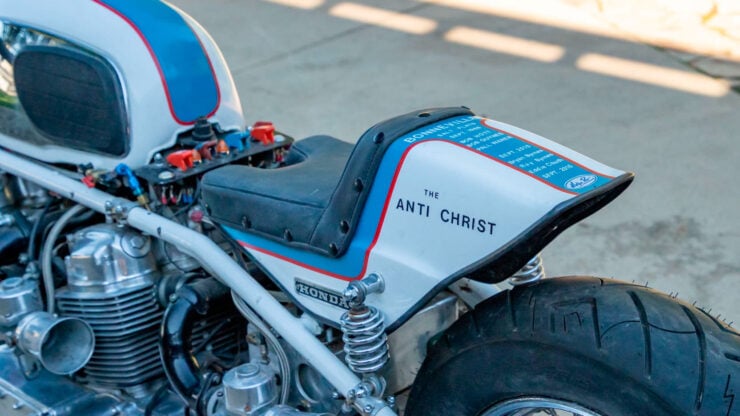 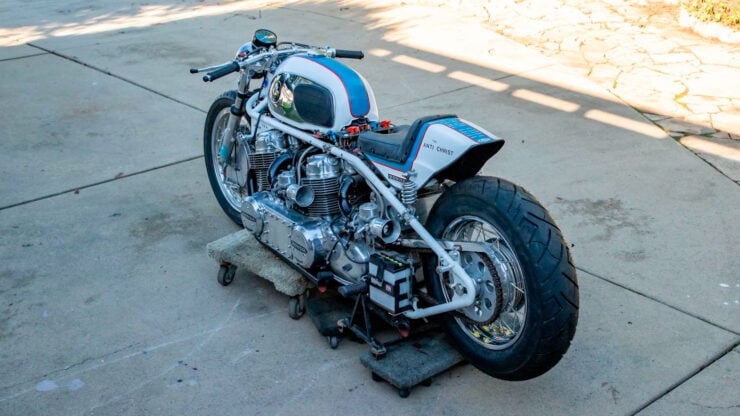 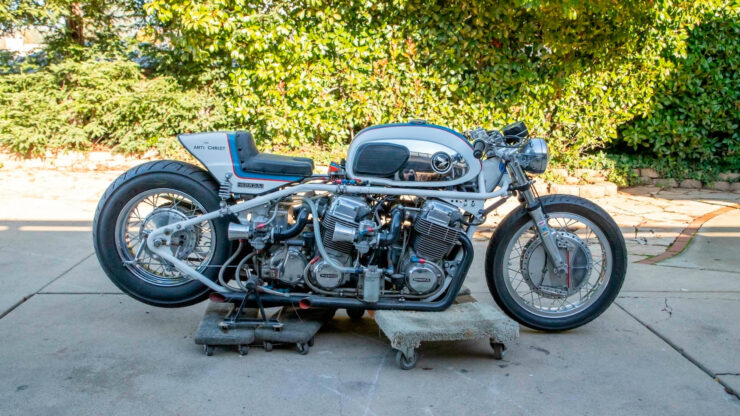 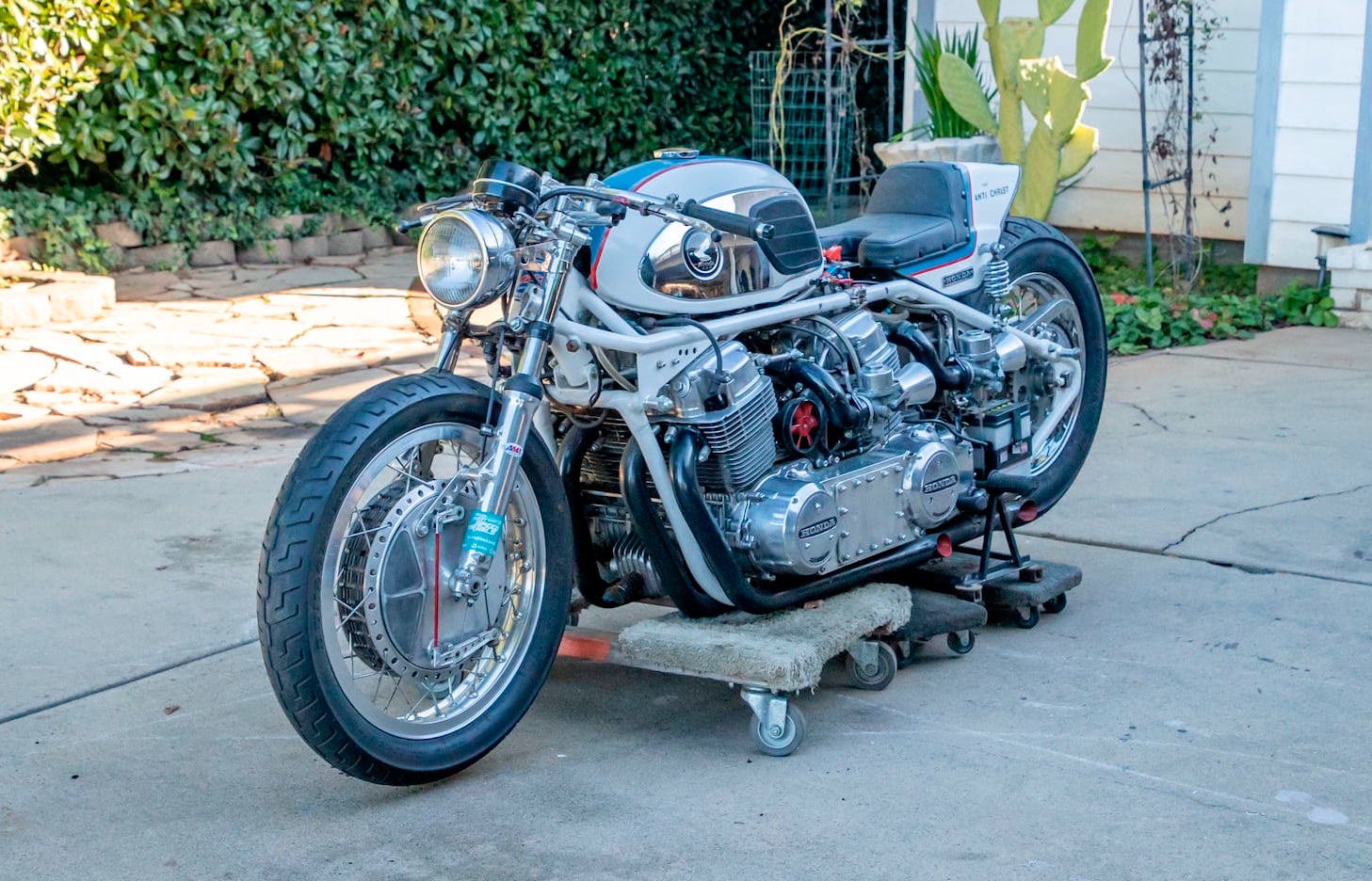