Although most people don’t realize it, the Harley-Davidson XA is the forefather of the recently-released Harley-Davidson Pan America adventure bike. Before emails from offended Pan America owners begin pouring in let me clarify that statement below.

Both the Harley-Davidson XA (Experimental Army) and the Pan America were built primarily to compete with similar, more established German machinery. The XA was built to compete with the BMW R71 and the Pan America was built to challenge the BMW R1250GS. Both bikes were built with significant influence from their German counterparts, and both were intended to work well both on and off-road.

BMW released their first motorcycle in 1923 at the Berlin Motor Show, it was called the BMW R 32 and it was powered by a flat-twin boxer engine with a shaft drive to the rear wheel – a layout the company still has in production today. 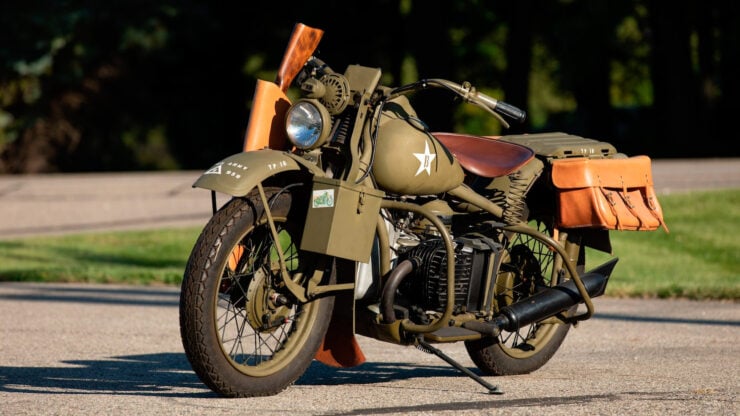 The Harley-Davidson XA was based closely on the BMW R71 which was being used extensively by the Germans in the early days of WWII.

BMW, or Bayerische Motoren Werke, first started out in 1916 in the closing stages of WWI as a German aircraft engine manufacturer. In the post war years they needed to line a new line of business to keep from going bankrupt, and motorcycle production was chosen.

Interestingly, BMW started making motorcycles five years before they started making cars, and both took signifiant influence from pre-existing British machines. The BMW boxer motorcycle engine was said to have been influenced by the Douglas motorcycle engine of the same design with a different layout (longitudinal vs transverse), and the first BMW car was the BMW 3/15 which was an Austin Seven built under license.

BMW would see great success with both their motorcycle and automobile production lines which continues to the current day.

The BMW R71 was released in 1938, perhaps the most notable new feature was the use of plunger-type rear wheel suspension rather than the more traditional hard tail rear end. This rear suspension had been trialed by BMW riders in the grueling International Six Days Trial a year earlier in 1937 with much success. 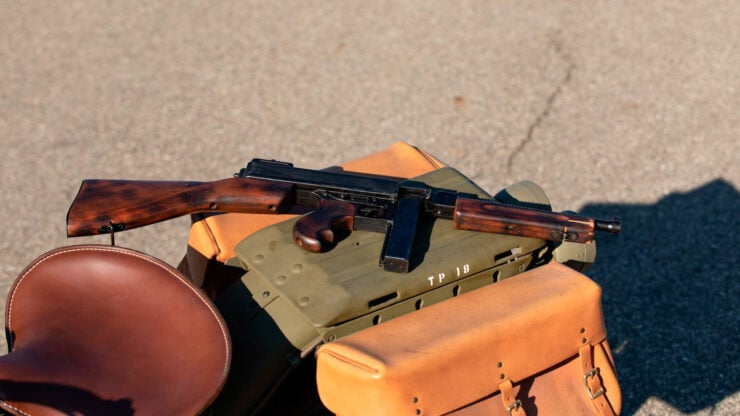 This restored XA is equipped with twin leather ammunition boxes on the rear and a front rifle holster containing a (non-firing) reproduction Tommy Gun.

The R71 is powered by a boxer twin mounted longitudinally with the heads and cylinders out the sides in the clear airflow for optimal cooling. The engine has a swept capacity of 746cc, a compression ratio of 5.5:1, and it was capable of 22 bhp. Though low by modern standards this was reasonable power output for the era, and the engine’s good torque characteristics resulted in a motorcycle with solid performance.

The relatively simple design and the engine that was able to run on very low octane fuel proved to be perfect for the German war effort during WWII, and the R71 was put to extensive use in Europe and North Africa both with and without a sidecar attached.

The BMW R75 with its more advanced overhead valve engine would begin to replace the R71 in the early 1940s, but both models remained in use through to the end of the war.

The Arrival Of The Harley-Davidson XA

The success of the BMW R71 encouraged the Americans to get their own version made – it was clear that the shaft drive and flat-twin engine was ideal for use in places like North Africa where the high temperatures and desert sands proved challenging for many motor vehicles. 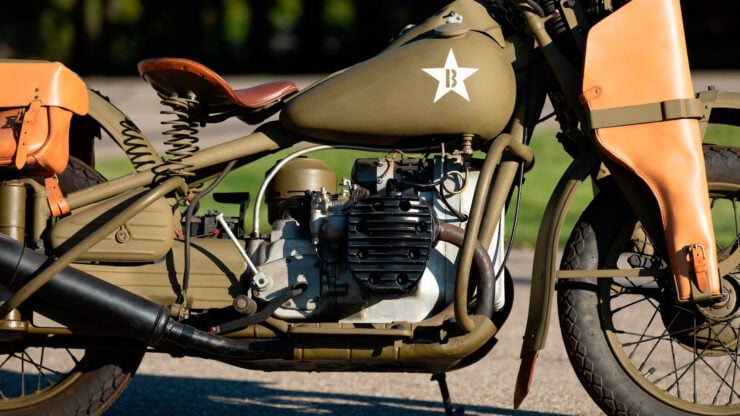 With its cooler-running engine and 7 inches of ground clearance, the XA proved ideal for use off-road, particularly in regions like the North African deserts.

Exactly how the engineers at Harley-Davidson got their hands on an R71 has never been disclosed, however we know that the XA was so similar it must have been the result of careful reverse engineering.

Both Harley-Davidson and Indian worked on their own versions of the bike, with the resulting Indian 841 being more closely related to a Moto Guzzi with its longitudinally mounted, air-cooled V-twin and shaft drive to the rear wheel.

Power is sent to the rear wheel via a 4-speed gearbox and a shaft drive. Remarkably the engine in the XA was reported to stay up to 100ºF or 38ºC cooler than the V-twin used in the Harley WLA, largely because the XA had its cylinders out in the clear airflow.

Despite the promise shown by the XA only the original 1,000 or so examples were ever made, it was never approved for full production. The Indian 841 experienced a similar fate, and the US military instead decided to focus on the Jeep and the Harley-Davidson WLA. 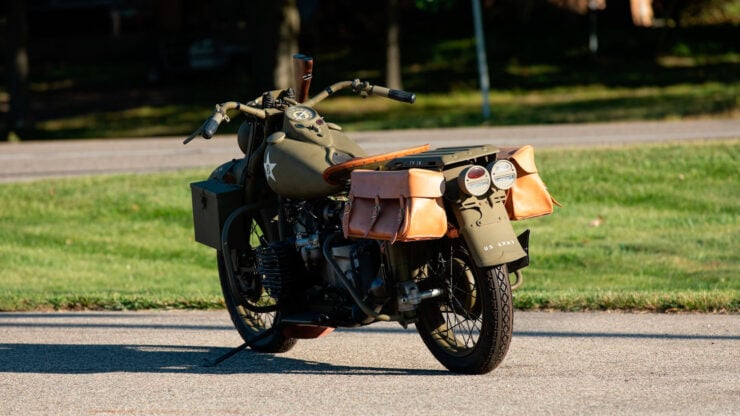 Ultimately just over 1,000 examples of the XA would be built, as the US military decided to stick with the Jeep and the pre-existing Harley-Davidson WLA.

The XA you see here is a 1942 model that has been restored by a marque specialist. It’s been finished in the period-correct color scheme.

The bike is also fitted with twin leather ammunition boxes on the rear and there’s a rifle holster up front fitted with a reproduction (non-firing) Tommy Gun.

This usual military HD is due to roll across the auction block with Mecum in last January, at the time of writing there’s no price guide, and it’s being offered with no reserve. If you’d like to read more about it or register to bid you can click here to visit the listing. 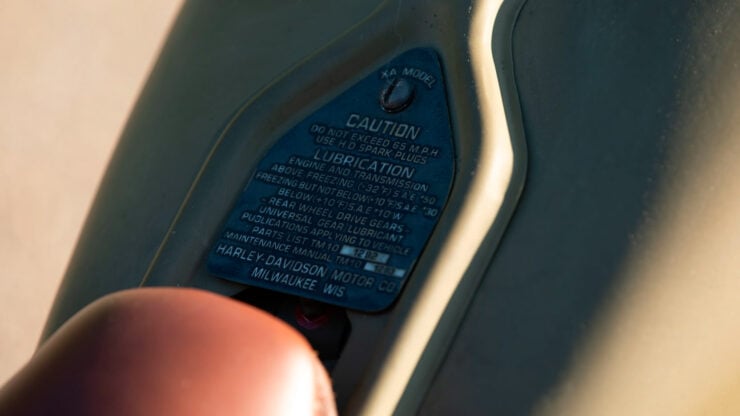 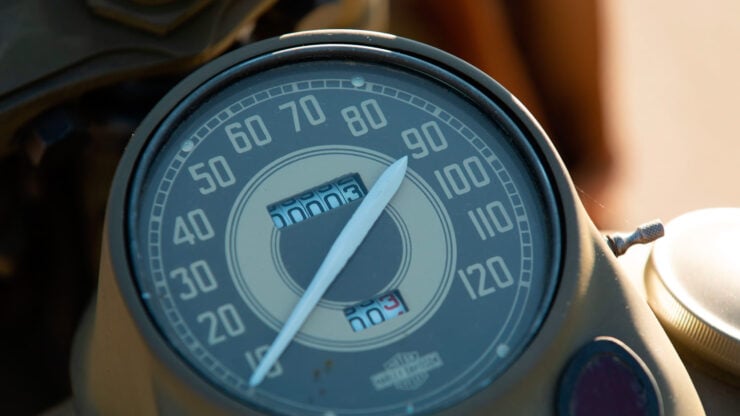 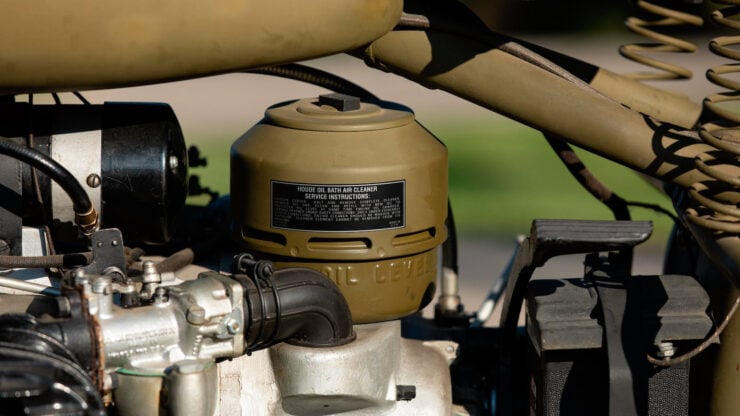 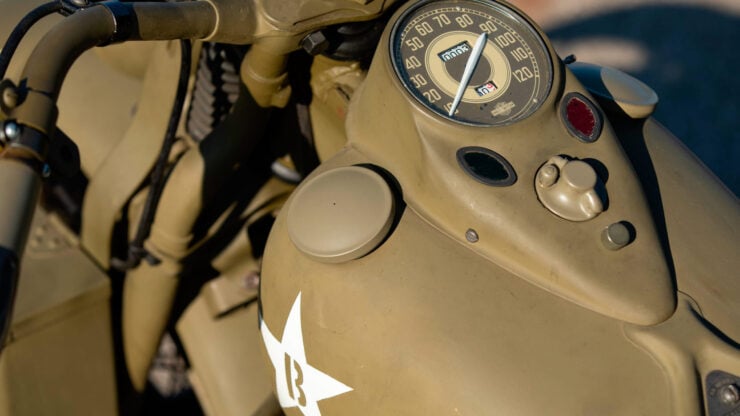 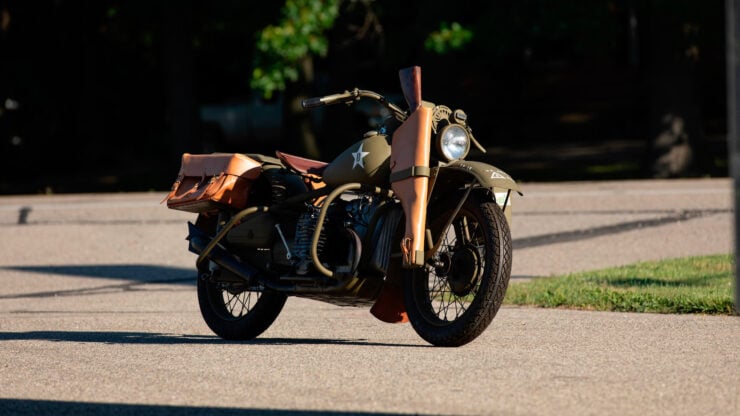 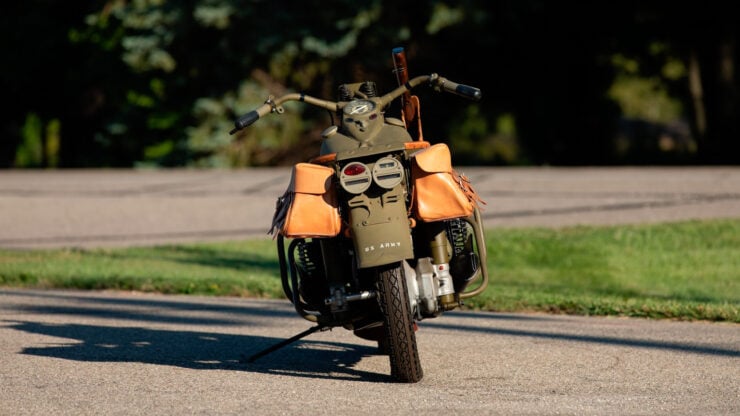 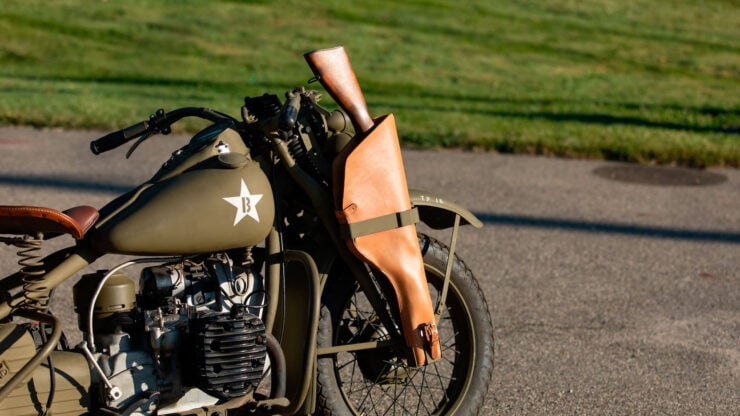 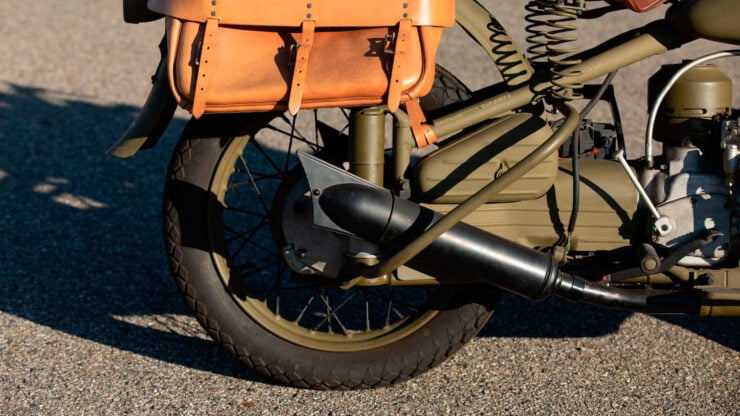 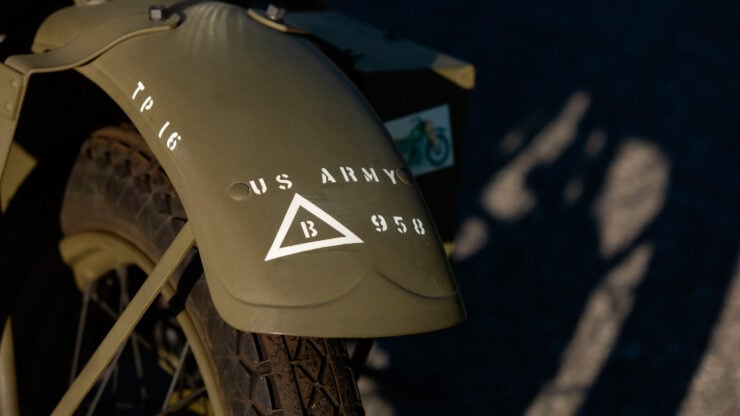 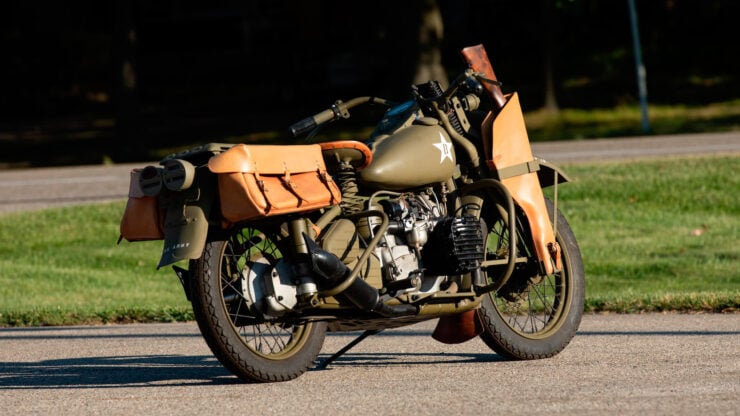 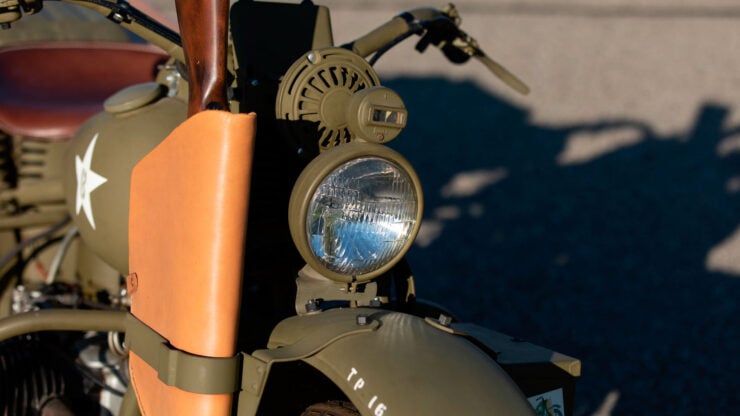 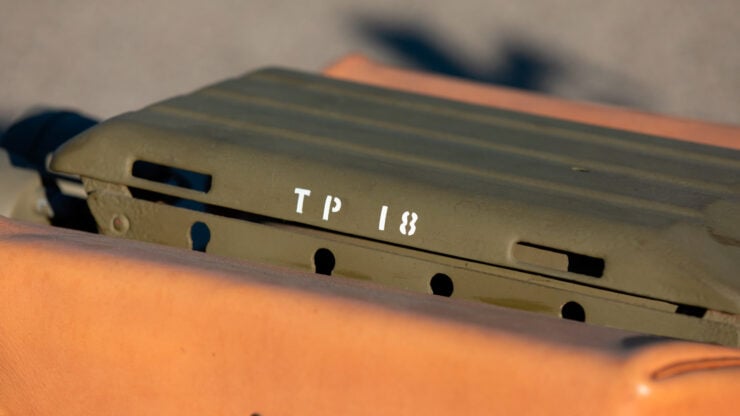 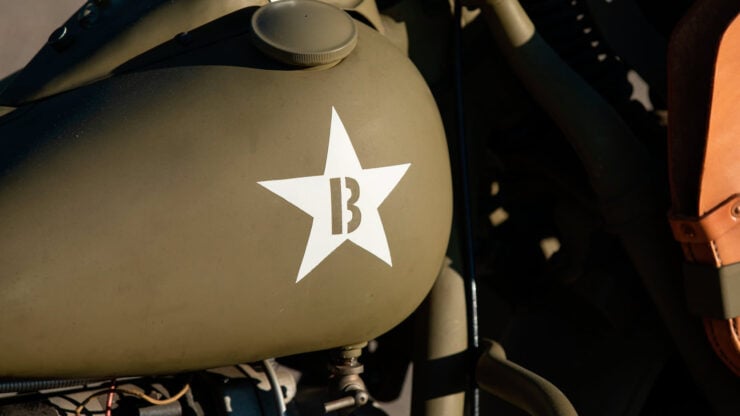 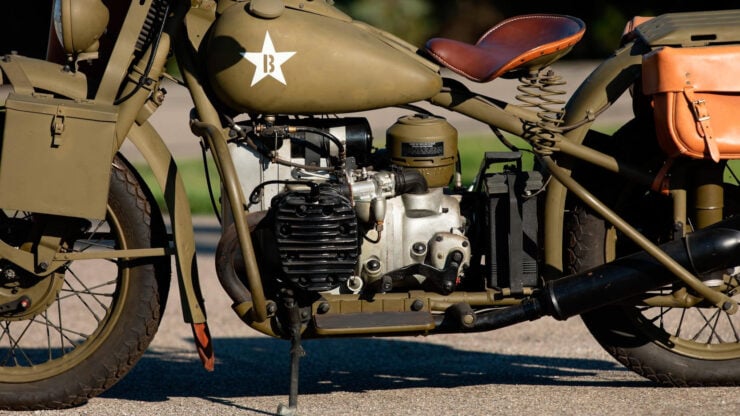 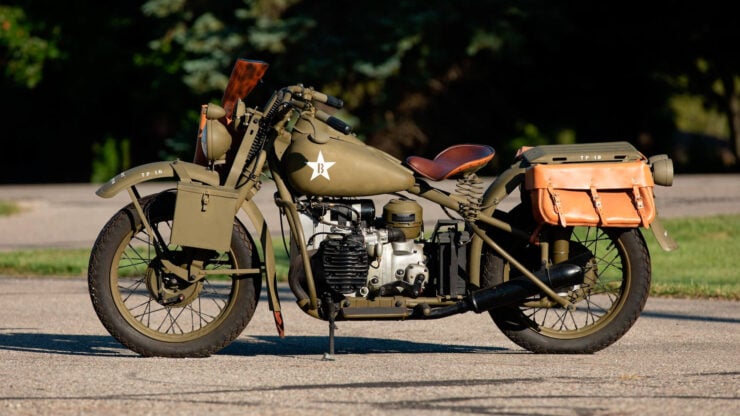 The post The Harley-Davidson XA – The Great-Grandfather Of The Pan America appeared first on Silodrome.