Electric two wheelers and cars are gaining popularity in India and around the world. One of the main issue that most of the electric vehicle users face in the initial days of owning an electric car is the range anxiety. In order to solve this issue a vlogger has now come up with a solution. He actually converted his petrol motorcycle into a hybrid motorcycle. The whole conversion process of the motorcycle is shown in the video.

The video has been uploaded by Creative Etc. on their YouTube channel. The video starts with vlogger showing the kit that he received for conversion. He has a Bajaj Avenger 220 Cruiser motorcycle. As part of the conversion he starts by removing the front wheels. The front forks, fenders and wheels were all removed. He then unboxes the package and takes out the alloy wheel which came with hub motor.

This setup allows him to make only minimum changes to the existing setup of the motorcycle. Some changes where made to the forks so that the new wheel with hub motor can smoothly fit in. After making changes, the fork was spray painted in black colour to give it a uniform look. After this was done, he moved towards the disc brake. Bajaj Avenger comes with disc brake at the front. The disc plate that came with the electric setup was small and the caliper cannot fit in. So the vlogger cuts the inner mounting points on the smaller disc and welds it with the original disc plate of Bajaj Avenger. 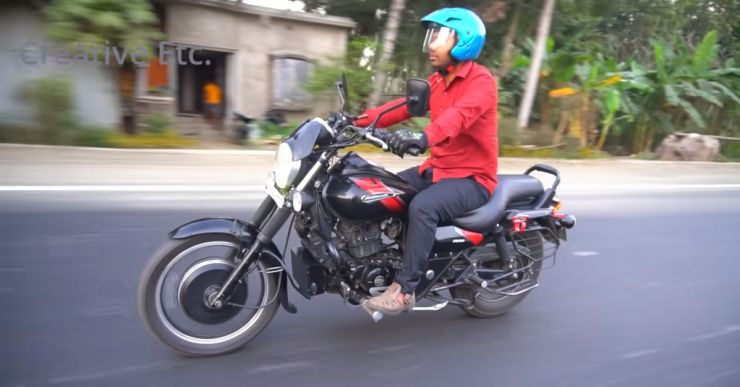 This way, the brakes were working fine and the vlogger did not make any major modifications to the front. Once the wheel was installed, he moved towards the battery pack. As this is a motorcycle and not a scooter, there is no underseat storage for batteries. He then decided to install the batteries to the right hand side of the grab rail. For this he chose number of lithium-ion batteries and combined them together to make a single battery pack.

He wrapped the batteries properly and the connection of the cells was also done neatly. The vlogger then moved ahead and made a case for the battery pack using metal sheets. He made the metal case and painted it black too. The batteries were placed in and was secured using old tyre tubes so that the batteries do not move around or shake vigorously while riding. The wires were then tucked neatly under the body panels and a separate metal case below the oil cooler was made where the controller and the charging port for the motorcycle was installed. The accelerator cable was also modified so that it works in both petrol and electric mode.