Ever since its launch, Mahindra Thar has been a popular SUV among enthusiasts. There are several aftermarket accessories available for Mahindra Thar in the market and we have seen many of them modify it as well. While most of them make modifications to enhance the off-road abilities. There are a few who like give the SUV a custom looks and make it look more premium than it actually is. Here we have one such video where a Mahindra Thar has been extremely customised inside out.

The video has been uploaded by Rajni Chaudhary on her YouTube channel. In this video, vlogger talks about all the modifications that are done to the car. Starting with the front, the car gets an aftermarket Wrangler like grille. The stock headlamps have also been replaced. It now comes with an aftermarket projector units that are imported from Thailand. The headlamp comes with LED DRLs. The bumper has been retained but, the original fog lamps have been replaced with LED units.

A red colour metal skid plate has been installed on this SUV as well. Coming to the side profile, the car gets aftermarket alloy wheels. The dual tone alloy wheels give the SUV a different look. The  other noticeable change here on the side profile are the foot steps. The original foot step has been replaced with an aftermarket retractable unit. The black cladding on fender and the side of the car has been finished in gloss black.

What makes this Mahindra Thar different from others in the market are its interiors. The owner has spent a lot in actually converting the cabin to something premium. The door pads and the dashboards are now wrapped in leather. The stock AC vents on the Mahindra Thar have been replaced with Mercedes-Benz like units with integrated ambient lights in them. 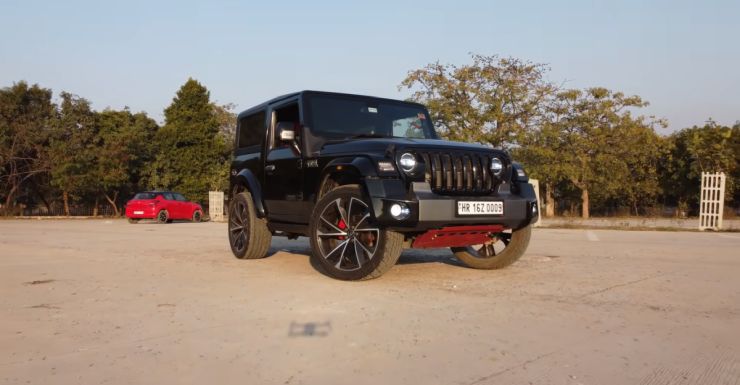 The seats now gets Red and Black dual tone custom fit seat covers and there are features like armrest as well. The rear seat passengers also get armrest and cupholders. The speaker system in this Mahindra Thar has been upgraded as well. The roof liners have also been wrapped in leather for better insulation. There is a Limited badge on the dashboard. Another attraction in this Mahindra Thar is the touchscreen infotainment system. This Thar has been installed with a 360 degree camera setup and the feed is shown inside the company fitted touchscreen itself.

The cameras are placed on the wing mirrors, front and rear to get a clear view of the surroundings. The door handles, centre console and plastic trims on doors get carbon fibre finish. The rear gets the stock bumper and the aftermarket spare alloy wheel is mounted on the tailgate. The work done on this Mahindra Thar looks very neat and although the tyres and wheels installed on this SUV do not look too tall, we highly doubt whether the owner of this SUV would now take it for off-roading.