The video has been uploaded by The Rajveer Singh Vlogs on their YouTube channel. In this video, vlogger introduces a motorcycle that looks like Royal Enfield Classic. The motorcycle is finished in Stealth Black shade and looks pretty good but, when you look closely, you find there is something odd about this motorcycle. The proportions on this motorcycle do not look right. 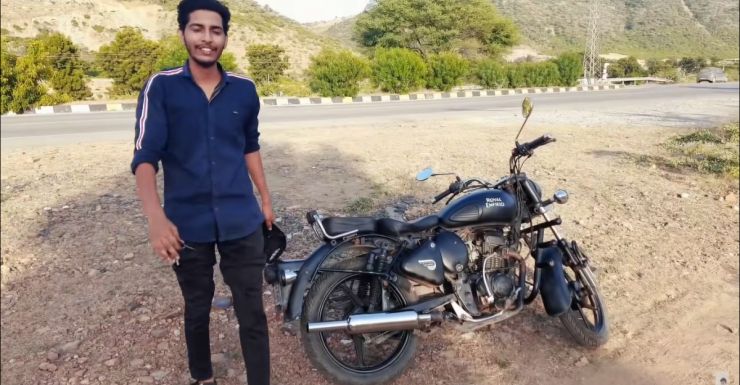 Vlogger then takes the Royal Enfield Classic replica motorcycle for a ride. It come with both self start switch and kicker. The exhaust note on this motorcycle is entirely different from a Royal Enfield. It misses the thump that people normally look for in a Royal Enfield motorcycle. The video on YouTube mentions that it is a Bajaj Discover 150 motorcycle but, we ran the registration number online and found that it is actually a TVS Flame. We are not sure whether the garage has placed the engine and body panels on the frame of a Bajaj Discover 150 or not.

The motorcycle seen here in the video is not the best modified motorcycle that we have seen till. There are several flaws in the modification that make it look very odd. One of the main thing that would strike you while looking at the motorcycle are the wheels. If he manages to fit in wider set of wheels then it might make it look a lot more convincing. Vlogger mentions that this motorcycle is actually available for sale however he does not mention the price.