Toyota launched the Fortuner Legender last year in the Indian market. Despite commanding a premium over the regular Fortuner, people are buying the Legender because of its butch looks and features that it offers. Some people have even started converting their existing Fortuners into Legender by buying modification kits that are available in the after-market. Here, we have such Fortuner that has been modified.

The video is uploaded on YouTube by Her Garage. The owner of the Fortuner is Abhishek Gumber. The SUV that we see in the video is a 2019 model. He modified the SUV to look like Legender because he really liked the looks of it. From the first glance, you won’t be able to tell that the SUV has been modified. Abhishek says that he spent Rs. 1.7 lakhs on modification. The only thing that is left is the rear tail lamps.

The owner also turns on the front headlamps and we can see that they look just like the Legender’s headlamp. The bumper is also the same which looks inspired by the Lexus SUVs. There is a lot of piano-black and blacked-out elements on the bumper. There is also Fortuner spelt out on the bonnet. Even the LED Daytime Running Lamps and fog lamps look just like the ones we have seen on Fortuner Legender. 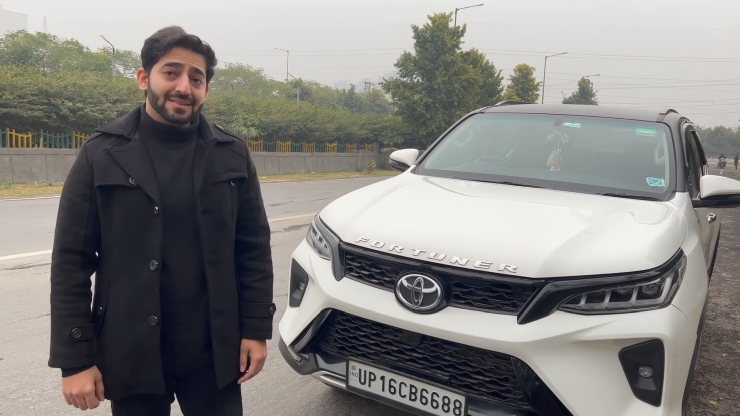 The modification has been done by buying a modification kit that has been imported. The roof of the SUV has also been wrapped in matte black. The owner did not opt for the new alloy wheels that come on the Legender because he thought it was not worth it. The rear bumper has been changed to look like the Legender’s bumper. The bar that connects both the rear tail lamps is in matte black but the Fortuner spelt out is finished in chrome so it stands out on the tailgate.

The interior has also not been changed because the owner was satisfied with the current interior. He did install ambient lighting in the cabin. The ambient lighting’s colour can be changed by using a mobile application. The owner also says that the throw of the headlamps is also better because it has multiple projector units.

He agrees that the interior lacks for the price point at which the Fortuner sells. The owner owns a 4×2 version because he is not into off-roading. Moreover, he only drives in the city. The third-row seats are not very comfortable, Abhishek points out. There is not enough legroom. Also, the SUV misses out on an electric sunroof.