Mahindra XUV700 is currently one of the most talked about SUV in India. Mahindra launched it last year and the SUV received an overwhelming response. The XUV700 became so popular that there is currently a waiting period of over an year on the vehicle. Ever since the delivery of XUV700 has started we have seen several review, ownership and performance related videos of the SUV online. Here we have one such video where a top-end diesel automatic Mahindra XUV700 AWD version is seen competing with a Toyota Fortuner Legender in a drag race.

The video has been uploaded by Elvish Yadav Vlogs on his YouTube channel. In this video, vlogger and his friends take their new Toyota Fortuner Legender and Mahindra XUV700 to an empty road to find out which SUV performs better in a drag race. The vlogger owns the Toyota Fortuner Legender and the XUV700 belonged to his friend. Legender seen here is the 4×2 version while the XUV700 seen here is the AWD version. In terms of weight Toyota Fortuner is a heavier SUV when compared to XUV700 but, it generates more power and torque. 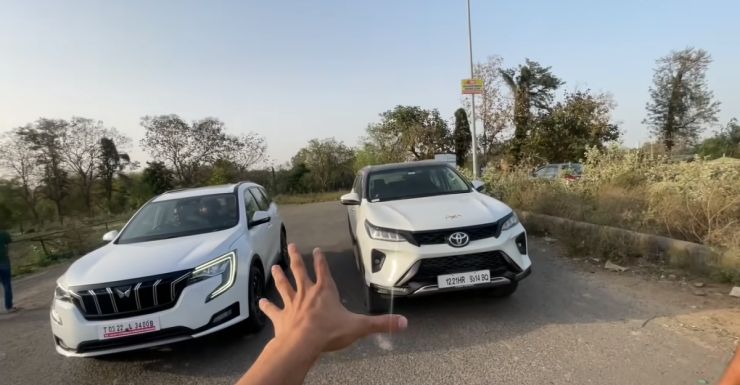 The race started and Toyota Fortuner Legender moved off the line quite aggressively. The Legender got the lead immediately after starting and maintained it throughout the round. Mahindra XUV700 was right behind the Legender but at no point it could overtake the SUV. Vlogger was very happy with the way Legender was performing and the same was visible on his face as well. After the first round, they drive the SUVs back to the start point and line up for the second round. The car was lined and the SUVs started the race again. Just like the first round, the Toyota Legender took the lead immediately and maintained it throughout the race.

Mahindra XUV700 was right behind it. After the second round, XUV700 driver mentions that he forgot engage the Zoom mode (sport Mode) in the XUV700 due to which the power delivery was not aggressive. Even after engaging the Zoom mode, XUV700 could not overtake the Fortuner Legender. After this round, driver’s swapped the vehicle for the last round. In this round, vlogger was driving the XUV700 while his friend was in the Fortuner. Surprisingly in this round, Mahindra XUV700 took the lead and managed it till the end. Toyota Fortuner Legender was announced as the winner of this drag race and it also shows how behaviour of a vehicle changes depending upon the driver’s experience.