The video has been uploaded by VIG AUTO ACCESSORIES on their YouTube channel. In this video, vlogger talks about all the customisations that have been made to the Innova Crysta. It is the G variant of Innova which misses out on many features when compared to higher trims. The vlogger has only tried to give the MPV a much more premium look, both from outside and inside.

Vlogger has not made many major changes to the overall look of the Innova Crysta from the front. It now gets a gloss black front grille and there are black and silver grille outlines as well. Coming to the side profile, the car gets an aftermarket side step, a chrome door beading and door visors. Damping has been done on all four doors for better insulation as well. At the rear, the stock tail lamps on this Innova Crysta has been replaced with a clear lens aftermarket LED unit. 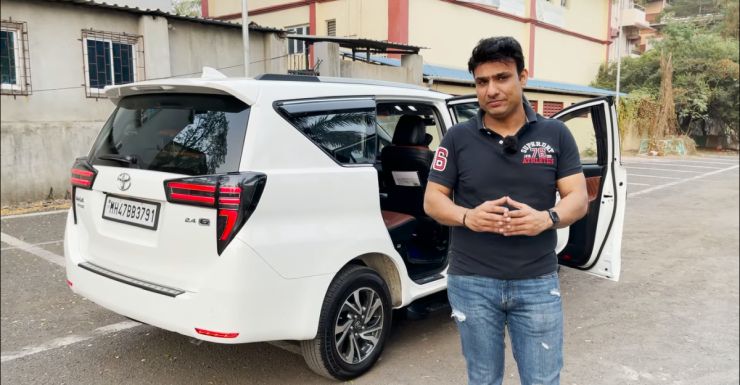 The tail lamps have a smoked effect which gives it a premium and sporty look at the same time. Vlogger calls it the Macan style LED tail lamps. A set of reflector lamps have also been installed on the car. These lights work in sync with the matrix LED turn indicators. Inside the cabin, vlogger and his team has done several customisations. The car gets custom fit seat covers. The seat covers are in walnut brown and black dual tone combination. This gives the cabin a premium look.

Instead of going for regular wooden panel inserts for the door and dashboard, vlogger chose to do a sparkling black and carbon fibre dual tone theme. This enhances the overall look of the cabin. Steering has also been wrapped and there and Walnut brown coloured pads on the doors as well. The car gets ambient lights feature as well. These lights are installed on all four doors and the dashboard. The footwell area is also lit. Floor mats have also been installed.

Toyota does not offer rear parking camera feature with G variant. A camera has now been installed and it is integrated with the existing touchscreen infotainment system of Innova Crysta. The MPV looks different with all the changes and is definitely a lot more premium. Toyota Innova Crysta is available with a 2.7 litre petrol and a 2.4 litre diesel engine option. Both petrol and diesel are available with manual and automatic transmission options.