Toyota is often associated with reliability in India. We have seen several videos of type 1 Toyota Innova and Qualis that are still running fine with lakhs of kms on the odometer. We have featured many of these cars on our website in the past. In this article however, we are discussing a sedan which was never officially sold in Indian market. It is a Toyota Mark II sedan. The car is rarely seen on our roads and here we have a video, where the owner of the car has completely customised the car to his liking.

The video has been uploaded by Sumit Patil on his YouTube channel. The car belongs to vlogger’s brother and in this video, he speaks about all the modifications that he has made to the car. He starts by saying that his brother had bought this car with an intention to sell it soon. After he started using the car, he fell in love with it and has changed his mind.

He has made couple of changes to the car to make it look more appealing. The whole car has been wrapped in Gold coloured wrap and the original wheels on the sedan have been replaced with dual tone aftermarket alloy wheels. Vlogger does not mention anything about the size of the wheels. He did mention that his brother has spent almost Rs 1.5 lakh to Rs 2 lakh on the car for customisation. There are no chrome bits on the car. All those elements have either been removed or are blacked out.

The door handles, lower door beading, ORVMs are all finished in black, This gives a good contrast with the Gold wrap on the car. The work done on this Toyota Mark II looks neat and gives it a different look. Only because of the wrap, the car would manage to attract a lot of attention while on the road. The interiors on this car have also been slightly modified. The car gets all black leather seat covers and carbon fibre looking plastic trims on the door and he centre console. It has a proper boxy design and offers ample amount of space inside. 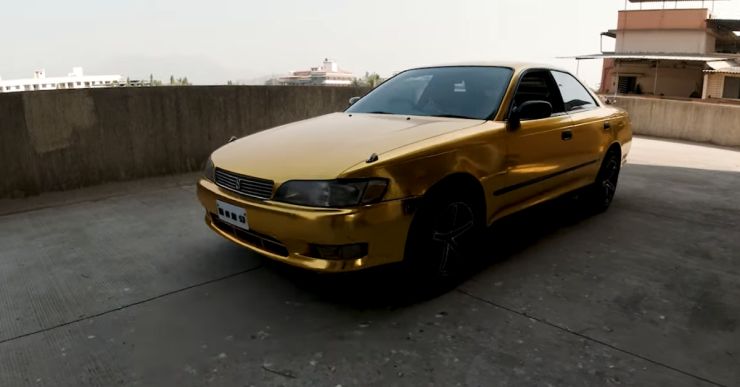 An aftermarket touchscreen infotainment system has also been installed. The Toyota Mark II gets frameless doors which gives it a premium look. The steering on this car is the same as stock with Mark II branding on it. Toyota launched 9 generations of this sedan in the market. This is a Seventh generation Mark II which was in production from 1992 to 1996. This was the X90 Series. It was available with both petrol and diesel engine options. There was a variety of petrol engines on offer but, it was available with only one diesel engine.

The car seen here in the video is a diesel version and it was powered by a 2.4 litre turbo diesel engine. The engine was mated to an automatic transmission. The vlogger mentions that the fuel economy of this sedan is not that great when compared to modern cars.