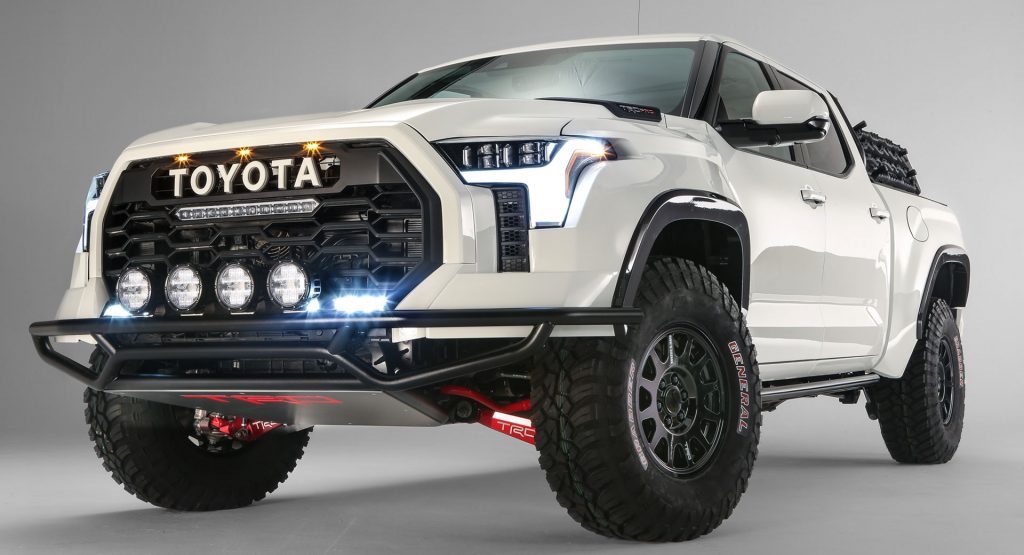 Off-road focused pickups are big business and there’s no shortage of competitors aiming to topple the Ford F-150 Raptor.

Ram was the first out of the gates with the bonkers TRX and Chevrolet will follow suit with the 2022 Silverado ZR2. It appears Toyota could also enter the fray with a hardcore pickup based on the Tundra TRD Pro.

According to a company insider who reached out to The Drive, Toyota is already testing a hardcore pickup and it’s said to be “very similar” to the Tundra TRD Desert Chase concept that debuted at SEMA last year. There’s no word on specifics or when the model will be introduced, but the source claimed Toyota plans to take the truck racing “in the stock class of an as-yet-unspecified event.”

When reached for comment, a Toyota spokesperson told the publication they “cannot comment or speculate on new product.” While that’s to be expected, the idea of a Tundra-based F-150 Raptor competitor is certainly interesting.

If it follows in the footsteps of the concept, it could potentially be equipped with bulging fenders and 18-inch forged aluminum wheels wrapped in 37-inch General Grabber X3 tires. The model may also have a long-travel suspension, a bed rack, and a unique front bumper.

It remains unclear if the rumored pickup would get a performance boost, but the Tundra TRD Pro has a twin-turbo 3.5-liter V6, a nickel-metal hydride battery, and an electric motor that is effectively sandwiched between the engine and a ten-speed automatic transmission. This setup enables the truck to produce a combined output of 437 hp (326 kW / 443 PS) and 583 lb-ft (790 Nm) of torque. That’s slightly less power, but significantly more torque than the Raptor which is rated at 450 hp (336 kW / 456 PS) and 510 lb-ft (691 Nm).