For the most part, low-cost and sustainable carbonfibre components have remained elusive in mainstream use primarily due to the cost of raw material and manufacturing, but sustainability and recycling have added another hurdle.

That said, the composites industry keeps edging towards more affordable solutions and one of the latest is a new type of compression moulding technique developed by the Retrac Group, a composite specialist and Formula 1 supplier. The new approach to compression moulding is being combined with the use of both plant-based natural fibres and recycled carbonfibre, as well as bio-resins.

The traditional method of making composite components, including F1 tubs, is to lay up various weaves of pre-preg (pre-impregnated with resin) carbonfibre mat in a mould, put the whole lot in a vacuum bag to compress the mat, then ‘cook’ it in an autoclave at a pressure of six bar at upto 200deg C for four to six hours. Doing so consumes a huge amount of energy, about £500 worth per cycle, and given that something as complex as an F1 tub can take around eight cycles to finish, the process can be both expensive and an energy hog.

Alternatives to using an autoclave for some components include resin transfer moulding (RTM), where mat is laid into a mould, resin is injected when the mould (tool) is closed and the mix is compressed and heated. Lamborghini developed its own version of RTM, unsurprisingly called ‘RTM-Lambo’, back in 2011. The bottom half of the tubs are pre-formed by laying up into carbonfibre (rather than hardened steel) moulds and then combined with the top half of the body, which is made in an autoclave in the traditional way. However, RTM-Lambo is a lengthy process that requires the installation of dedicated production lines.

Retrac’s version of compression moulding starts with adding dry matting to the mould, followed by pre-mixed resin before the combination is compressed and heated. This method is cheaper than using pre-preg because it cuts out a manufacturing step (that of impregnating the mat with resin) and should help open up the use of bio- composites to a wider audience. Crucially, the whole process is completed in one step and takes minutes rather than hours.

Although compression moulding has already been adopted for components by some manufacturers and their leading suppliers, Retrac’s system differs in that the 60-tonne screw press is driven by electric servos rather than hydraulics for more precise control of the press. Unlike hydraulics, which consume energy through the whole compression cycle, the servos consume energy only as the press closes.

The press has its own built-in vacuum system, is controlled by the company’s own software and enables carbonfibre components to be made faster and to a high-quality standard or achieve acceptable quality using natural fibres and resins. The bio-resins used have the highest proportion of sustainable, bio-based ingredients on the market. Because of the quality and speed of the process, it’ll be possible to make tens of thousands of parts per year and it’s expected to make composite parts more accessible to a larger number of vehicle manufacturers. 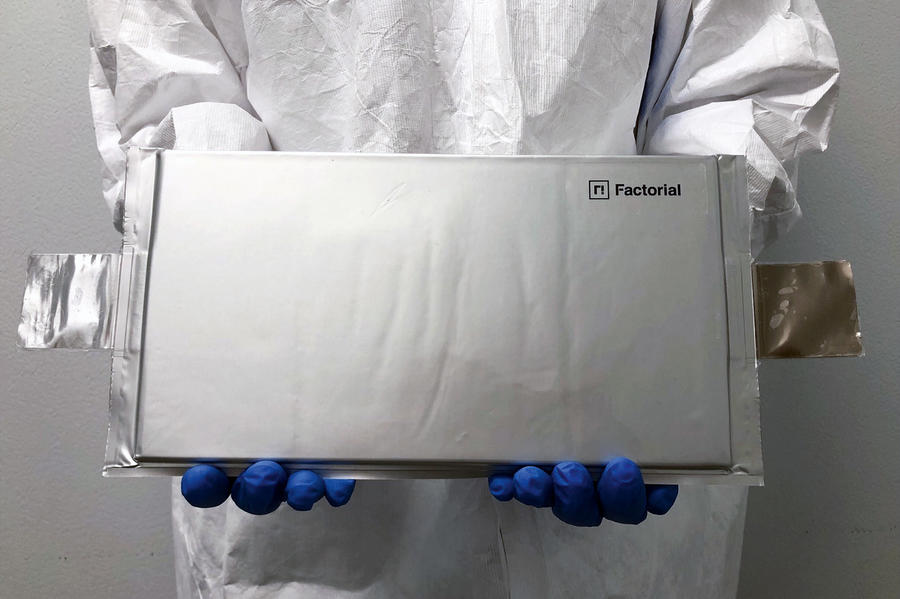 In the race to develop solid-state batteries, Factorial Energy could be leading the charge. In the past few months, Hyundai, Kia, Daimler and now Stellantis have all taken a stake in the US firm and are working with it on the new technology.

Factorial claims to be the first to demonstrate a 40Ah solid-state cell based on its Factorial Electrolyte System Technology (FEST), which was developed in house. It claims FEST will yield a 20-50% rise in range without compromising the life of the pack.