The prospect of charging a car, or any electric vehicle, while it’s driven along the road is an appealing one and something that has been the subject of continual research and development throughout the world for well over a decade.

One of the latest projects is the Arena del Futuro, a 1050m-long oval test circuit built by Stellantis and partners near the A35 between Brescia to Milan in Italy, to develop ‘dynamic wireless power transfer’ (DWPT) or, to put it another way, EV charging on the move.

Being able to wirelessly charge a vehicle on motorways while driving it would have a major impact on EV design and prospects for haulage trucks, which currently would need unfeasibly large batteries to achieve the distances they need to cover. However, cars and trucks could have much smaller batteries if they relied on static charging locally, with longer range achievable on trunk routes through the use of DWPT. Trials started this year with a Fiat 500 electric and Iveco E-Way bus equipped with DWPT receivers.

Inductive charging of EVs has been around as long as the modern EV and trialled in real-world conditions as far back as the early noughties. In its basic form, the principle is exactly the same as it is for wireless phone or toothbrush charging, or for generating a spark in a petrol engine ignition system.

‘Wireless power transfer’ takes a number of different forms but is based on the phenomenon that if a wire is placed in a magnetic field, and then the magnetic field is removed, a voltage is induced (generated) in the wire. Scaled up, with coiled wire and powerful electromagnetic fields, the electrical power generated can be big enough to charge an EV.

The charging technology used for the project was developed by Israeli partner Electreon and consists of multiple charging pads sunk beneath 11cm of asphalt along the length of the road and connected by a cable. As the vehicle passes over each charging pad, its receiver, working at an induction frequency of 85kHz, generates electricity to charge the battery.

The tricky bit is alignment. Wireless phone charging pads in cars can be more sensitive to the position of the phone than others. The same applies to positioning an EV equipped with wireless charging hardware over a charging pad, either sitting on the surface or under the surface. The Electreon system is much less fussy about alignment than has previously been the case and is unique in that it provides both static charging when a vehicle is stationary and dynamic when driving.

It is also the first time a dynamic charging system has been powered by DC current, which allows energy transfer to the vehicle compatible with motorway speeds.

As well as the submerged pads and cabling, the system consists of management units that handle the transfer of energy from the grid to the road and communicates with approaching vehicles. Receivers on the vehicles generate electricity as they pass over the electromagnetic field created by each pad and a central control unit communicates with all management units and registered vehicles. 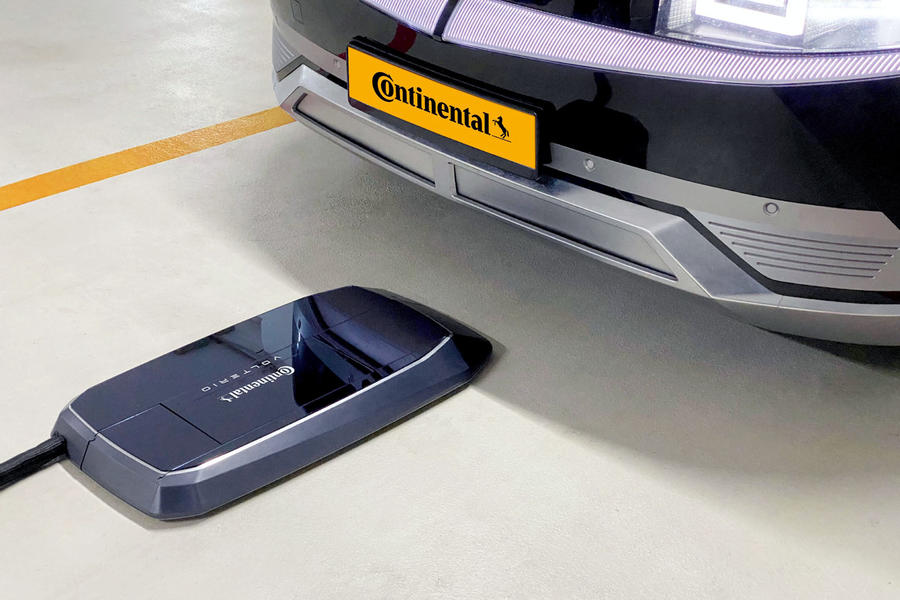 Continental is developing a charging robot called Volterio for use in private home garages and elsewhere. The robot sits on, or is fixed to, the ground, and when the car parks over it, it engages with a special conical socket on the underside.

The robot charger helps with the problem of alignment by being able to shift its connector up to 30cm in any direction and it doesn’t matter if the car is at a slight angle, either. Volume production is planned for 2024 and the charger can work with a 7.4kW domestic feed or 22kW three phase.